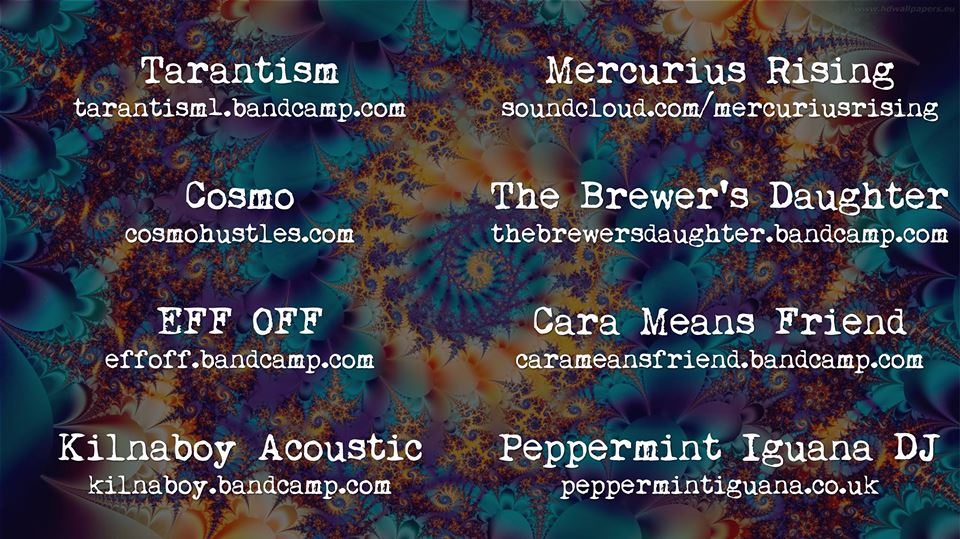 It would be a little bit egotistical to review a gig we have promoted ourselves, so here is a blog post about the first Peppermint Iguana gig for fourteen years.

It started out as a simple enough idea, Peppermint Iguana were going to team up with the Green Gatherings Campaign Crew (well, Tom Fowler) to put on a show case of some of the artists than have been found performing on the ‘open mic’ that the Campaigns crew host at the annual green gathering in Chepstow.

We started off with booking the amazing Tarantism Folk Disco, who have blown minds at the last two Green Gatherings. Then we started talking to some of our other mates who had also played our stage. It was not long before we had a list of bands that, frankly, was quite ridiculous for one night. But hey, we aint nothing if not one big happy family and we could not chuck anyone off the list (we just had to stop Tom inviting anyone else when he was pissed).

An assortment of beds, sofas and park ups were sorted, beers were bought (and smashed and bought again), vegan rolls were made and before we knew it, the gig was on.

Polite threats were made to all the bands, explaining what would be used against them if they ran over their allotted time slot, and where it would be shoved. The threats either worked, or were unnecessary, because everyone stuck to the timings and no lubricants were necessary.

A slightly slimmed down Kilnaboy were first up, showing a more laid back and chilled out side to their repertoire. Despite the fact that we had forced them to start the set before the doors had even opened, they soon filled the room and an atmosphere was created from the word go.

Cara Means Friend* (AKA Cara from the Defekters) was next up and her unique brand of acoustic reggae had the crowd dancing as if she had a full band with her.

(*Don’t tell anyone, but Cara has never performed on our open mic stage, but she was in the hood busking and she asked ever so nicely to be part of our party. How could we say no? No doubt we will get her to the Green Gathering in the not to distant.)

The Brewer’s Daughter (AKA Rhiannon from Tarantism – we sense a bit of a theme developing here) had dragged herself off her death bed to perform for us, such was her determination to be part of this event. Her lurgy went un-noticed by the now thronging audience (well, she is a woman after all) and she soon had the gathered clans in the palm of her hands.

For much of her set she was accompanied by her gormless assistant Fraggle (AKA him out of Back to the Planet and the Skraelings).

Once Rhiannon had finished her serenading of the tribe, Fraggle performed some songs written by his clever mate Doozer, who sadly was unable to join us to perform with the Fragster as EFF OFF. 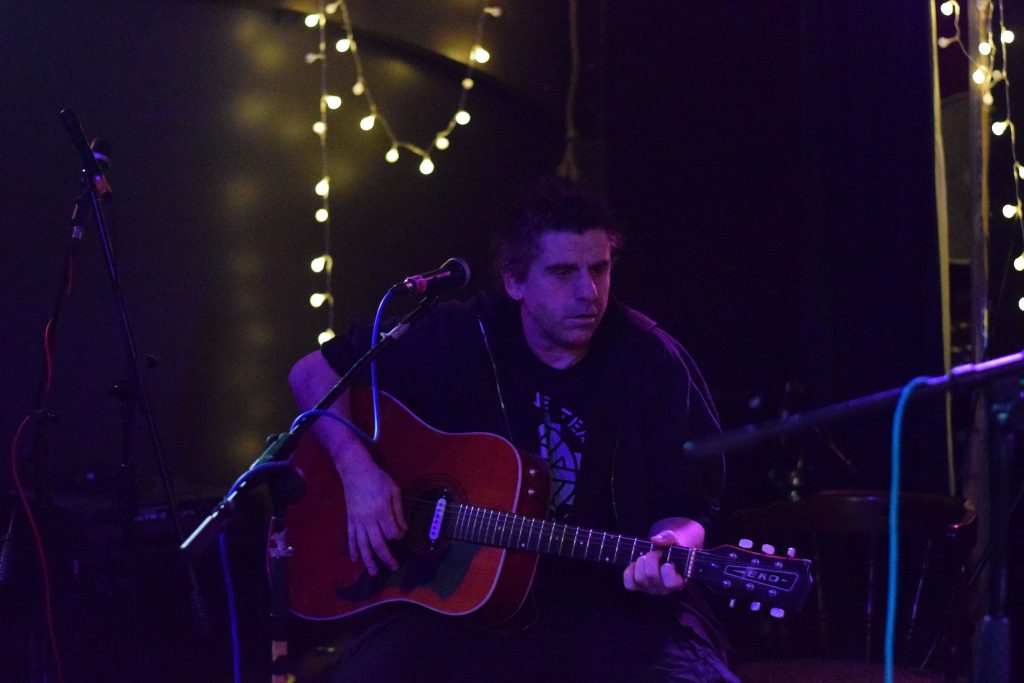 Terrified of the possible consequences of over running, Frag managed to squeeze in ten Essex lullabies in ten minutes, much to the amusement (and relief) of the now throbbing masses. This marvellous feat of accelerated minstrelling resulted us finding us actually ahead of time, much to the relief of the handsome stage manager.

Cosmo, the rebel without applause, then took to the stage, kicking off with some audience participation, in the shape of a round of ‘Happy Birthday Dear Zoe’, dedicated to the eldest of the Iguana offspring. Smiles were beamed and dads were forgiven for forgetting to get birthday cards.

Cosmo has now had enough practice at this to almost sound competent and his mixture of rebellious comedy, traditional folk and music hall songs had the now lubricated audience singing along. He had old mates smiling and even impressed those that had not previously experienced the tour de force that is the Scots-Hungarian-anarcho-troubadour on free booze. People were even queuing up to steal his merch whilst he was on stage.

Despite his reputation for being unable to do as he is told, he managed to almost keep to his allotted time slot; although when told he could do one more he felt compelled to do the twelve inch jazz version of ‘Oi Mush’.

Mercurius Rising were up next and banged out a set that just defies categorisation with their unique brand of acoustic punky folk ska core. Their set had the now sweaty crowd bouncing and casual observers wondering what the hell was going on.

The Rising are a perfect example of the unexpected and awesome leftfield vibes that make the Green Gathering Campaigns Open Mic what it is. Always expect the unexpected, and expect it to blow your mind.

And then came the moment we had all been waiting for.

When Mel and Magnus had first suggested they play a folk disco on the open mic we responded “yes dears, of course you can”, whilst secretly making the ‘loopy’ sign when they turned their backs. “It’s a fucking stupid idea”, we thought to ourselves, but did not say it out loud because they have been our mates for twenty years.

Shows how much we know. They totally blew away the open mic in 2016, and had to play several songs twice because they did not know enough for an encore. In 2017 people knew what to expect and had brought all their mates.

So as we waited for them to come on we felt a mixture of jealousy of those that were about to see their first Folk Disco and anticipation of seeing the look of amazement on faces when those vibes hit them.

It is not cool to admit to liking disco in public, but Tarantism make it perfectly acceptable, cos it is not plain disco, it is Folk Disco. They tore through some of the best floor fillers of the seventies and nineties (the best periods for dance music). ‘Dub be Good to Me’ and ‘Groove is in the Heart’, rubbed shoulders with ‘One Way Ticket’ and ‘D.I.S.C.O.’

They had even gone out of their way to learn Donna Summer’s ‘I Feel Love’ after constant nagging from the Iguana crew.

Punks rastas, hippies and even trad folkies were grooving, arms aloft and singing along to tunes that most of us would never admit to liking. The now melting crowd were lost in bliss and members of the Surplus Festival were compelled to get up on stage to strut their funky stuff.

There was no danger of them getting away without an encore and a massive sing along to ‘Disco Inferno’ soon followed.

And pfft.. in a flash it was all over.

Then we all melted away onto the night, spreading love vibrations to the natives. But there were two types of people in town that night. Those that had experienced the folk disco, and those that had not.

But we were left with a huge problem.

How the fuck are we going to top that?