Former Pink Floyd drummer brings his band, Saucerfull of Secrets, to Cardiff to play a set of early (pre Dark Side of the Moon) tunes.

I like to think I have my finger on the pulse and don’t get stuck in a rut by only going to see aging dinosaurs. Tonight, as we drive to the closest multi story car park to St David’s (the gang is too old to be parking free and walking now), we drove past a queue to go into the Cardiff International Arena. Lots of bright young things going to see Dua Lipa. I had to Google her. So much for finger on pulse. (So much for not going to see dinosaurs.)

There’s something about Nick Mason’s band that makes them a little bit cooler than your average dinosaur. Well, for me at least, I’m sure most of the people going to see them don’t trouble themselves with trivial things such as ‘cool’.

They are not a Pink Floyd tribute band and they are not even attempting to market themselves as Pink Floyd. And yet they are both. 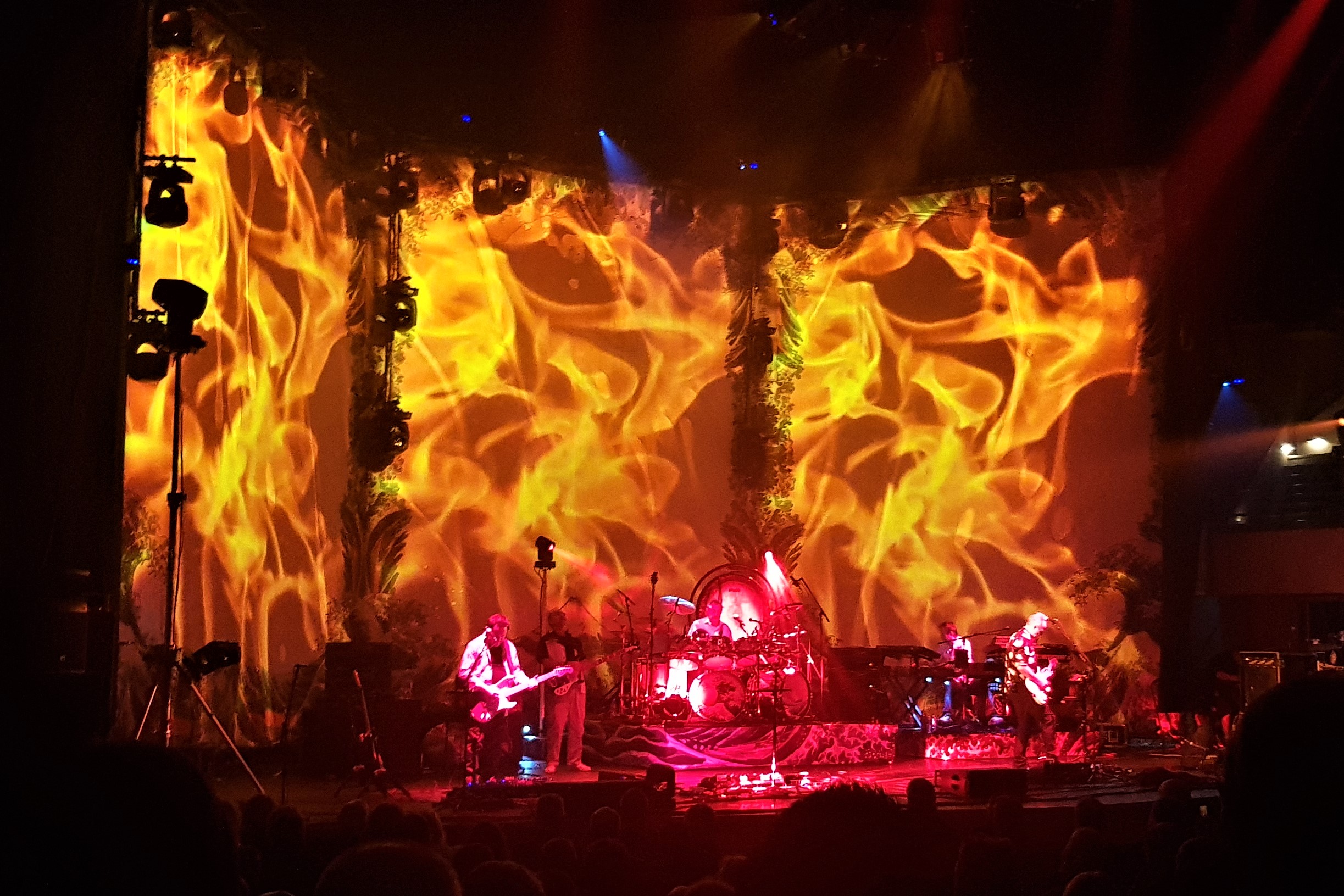 Floyd released several inovate,  ground breaking albums. Even after they released Dark Side of the Moon, an album that stayed in the charts for nine hundred and sixty two weeks (yes,  eighteen and a half years) they still managed to knock out two more interesting albums. Personally,  they lost me with The Wall, but still had another four albums in them.

The fact that this band only do early numbers, pre Dark Side of the Moon,  adds to the attraction. We wouldn’t have to put up with kids shouting at teachers.

There’s also the fact that they tend to play sensible size venues where you can actually see them on stage.

Mason has always been the quiet one at the back and mostly stayed away from the feuding between Gilmore and Waters, so there is no niggling ego in the background, it just feels like you are watching a bunch of mates making music for the love of it.

The band includes Gary Kemp (yes, him from Spandau Ballet) on guitar and Guy Pratt, son in law to the late Rick Wright on bass. His CV includes working with Floyd, Dave Gilmore, Roxy Music and the Orb. the line up is completed by Lee Harris on guitar and Dom beken on keyboards

I have militantly avoided Cardiff’s St David’s Hall for many years. I’ve never really liked sitting down at gigs. I seem to recall watching someone like Motorhead (or was it Hawkwind?) there back in the 80s, which made no sense at all. Although I have seen Susan Vega, the Ukulele Orchestra of Great Britain and – erm – Noam Chomsky there, which in fairness did make sense.

As I eased my increasingly aging, and aching, bones into my seat, I noted how comfortable it was, with plenty of leg room and what a good view there was. I decided it is about time I reviewed my ‘boycott’ and considered going to see more bands there. I must be getting old – although looking around the room I felt like a young whippersnapper.

Whilst the venue is particularly un-rock ‘n’ roll, it has to be said, it is a magnificent venue. Opened in 1982 and designed specifically for ‘concerts’, be it gigs, stand up, opera or whatever; the sound is as crisp and clear as you can only get in a building built with acoustics in mind. The lighting is stunning and the view wherever you sit is spot on. And with a capacity of fifteen hundred, it is still reasonably intimate.

The professionalness of the venue, combined with the precision working of the band, mean that when the publicity states that the show will start at 7:45, they mean 7:45. Not 7:44 or 7:46. Bang on cue, they lights go down, the band walk on, and the light show commences.

They kick off with one of my favorite’s, ‘One of These Days’. A strong start. They were going to have to pull all stops out for it to not go down hill after such a strong opening. I didn’t have to worry, for the next hour or so we are treated to the likes of ‘Arnold Layne’, ‘Obscured by Clouds’, ‘Mudmen’, ‘Candy and a Currant Bun’, and a magnificent ‘Set the Controls for the Heart of the Sun’.

Although not the original line up, this band have been around the block and are masters of their craft. The sound is prefect, and they have the confidence to throw in improvisations that keep the crowd on their toes (metaphorically obviously, cos everyone was sat down).

None of the tunes get introduced, but there are the odd moments when Mason takes the time to reflect on things like how the current band got together and memories of Syd Barrett. He even takes the time to joke with the audience about how he has been able to buy a time share in Spain from the money he has made from the tour (although I don’t think he actually needs the money, this definitely feels like fun for all concerned).

During the break we spot that there are empty seats down the front so relocate for the second set. Literally front and center, the only person with a better seat was Nick Mason himself. 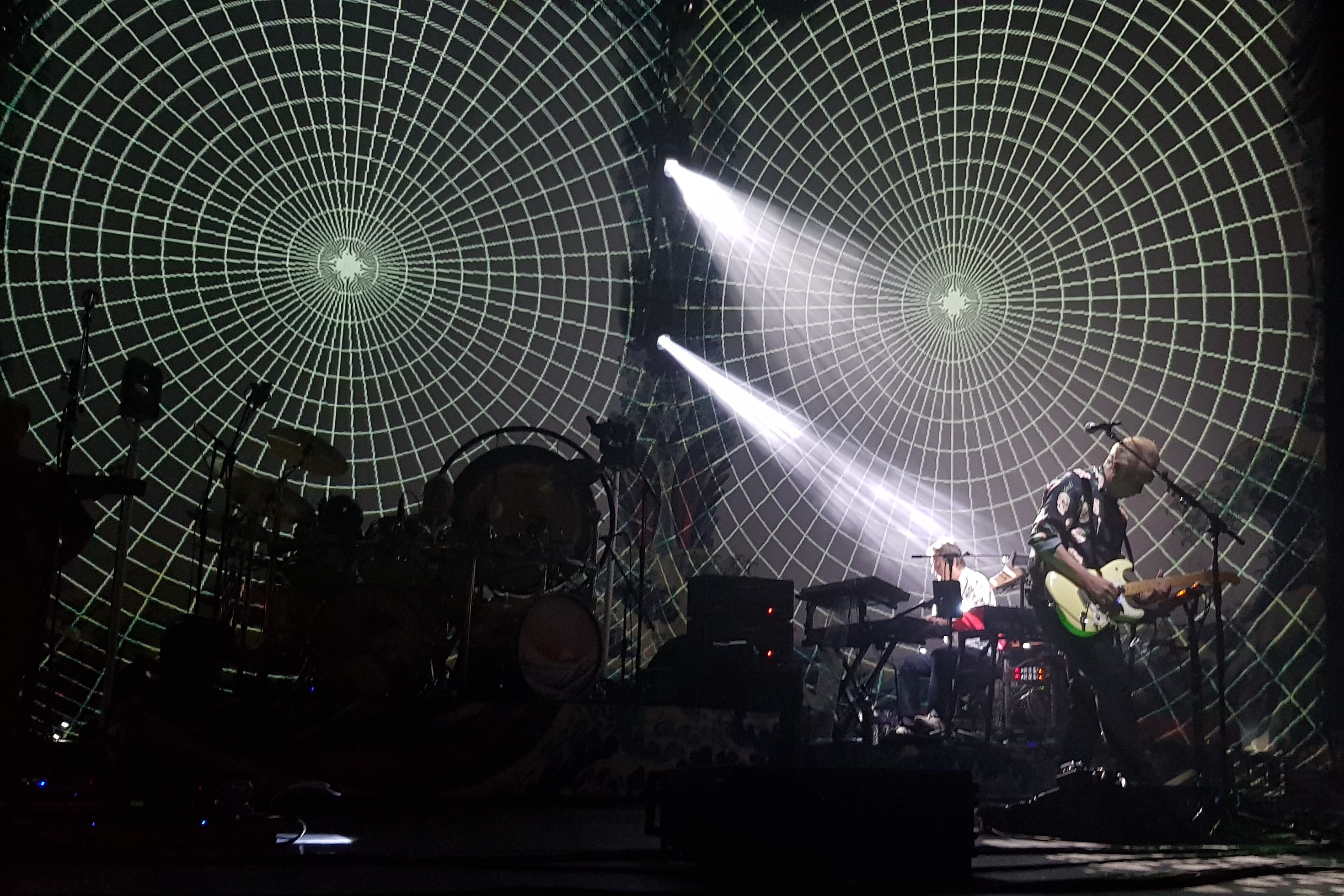 The second set kicks off with ‘Interstellar Overdrive’ followed by the likes of ‘Astronomy Dome’, ‘Childhood’s End’ and ‘See Emily Play’. We are treated to a brilliant rendition of ‘Echoes’, which rocks in at twenty-three minutes on the album, and is similar length in tonight’s set. It is a thing of beauty – although in the middle of Lee Harris’ guitar solo, I’m sure Mason falls asleep behind the drums. He is seventy-eight after all, bless him.

They finish the second set and the lights stay off, an encore is clearly on the cards. We get ‘Lucifer Sam’, ‘Saucer Full of Secrets’ and ‘Bike’, before they finally do their last bows and we pour out into the night to fight with the Loopy Dooey fans in the car park. 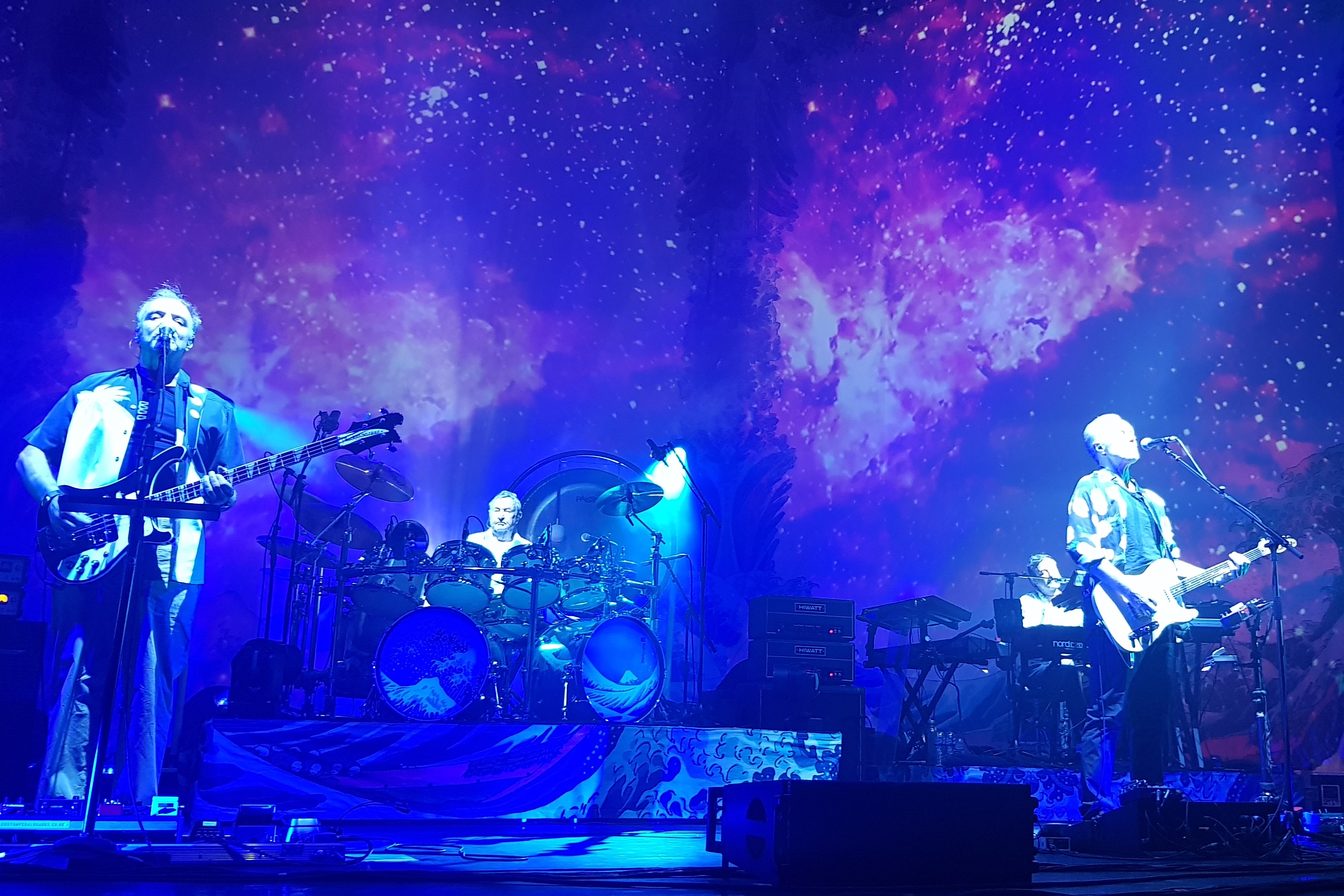 I still prefer standing up close and personal in a sweaty toilet venue with a hundred in the audience. But sometimes, just sometimes, sat in comfy seats, watching masters of their craft put on a show with a top of the range PA and a spectacular light show is just what the doctor ordered. Very civilised.

Now, where did I put my pipe and slippers?