The Interupters make first welsh appearance. They drop by Cardiff for the final leg of a two year long world tour to promote their most recent album, Fight the Good Fight.

The thought of The Interupters coming to Cardiff on their own would be enough to get the pulse racing. But hey, The Skints are also on the bill, so this is a night not to be missed.

We arrive early, to make sure we don’t miss anything.  As we walk through the door Buster Shuffle are taking to the stage  complete with upright piano front and centre.

I’ve not come across these before and they put in a cheery shift. The piano and the cockney accent draws comparisons to a certain duo famous in the 80s. “Chas and Dave do ska”, prompts one of the gang. Not quite, but not a million miles off. 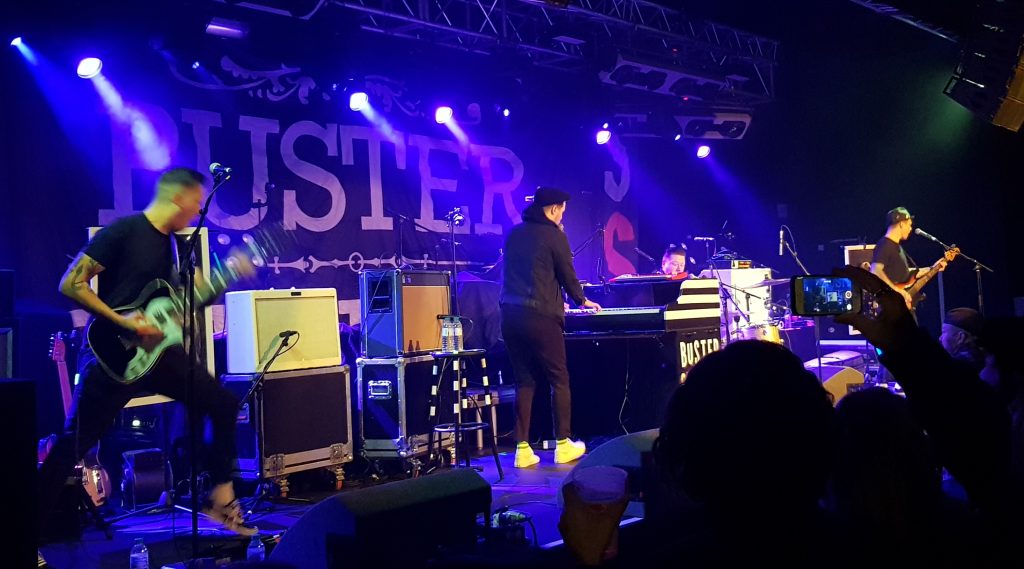 At first the crowd dont seem that interested, the perils of coming on first. But it does not take long to get heads nodding, then eventually bouncing to their cheerful set.

The band tell the audience how much they like Cardiff and call to their manager on the side of stage to ask her to get them another gig. As if by magic a few songs later they announce they are playing Clwb Ifor Bach. As if by more magic, flyers for the gig start to get handed out. Hmm.

The already busy hall fills up even more through their set. Lots of aging punks and skins file in, many with an immaculate skinhead look. We are used to seeing middle age punks and skins at gigs by old punk and ska bands, but this is the first time I can recall the old skool turning out for relatively new bands. It is refreshing to see they are not stuck in their ways.

It has been a real pleasure watching The Skints grow. When we first caught them supporting Sonic Boom Six in TJs, it was clear that they were a bit special. Not your average ska-punk band. They always had that flavour of the old skook ska and reggae originators.

The last time they played the Tramshed they sold it out as headline act, so needless to say they were going to draw a crowd tonight. 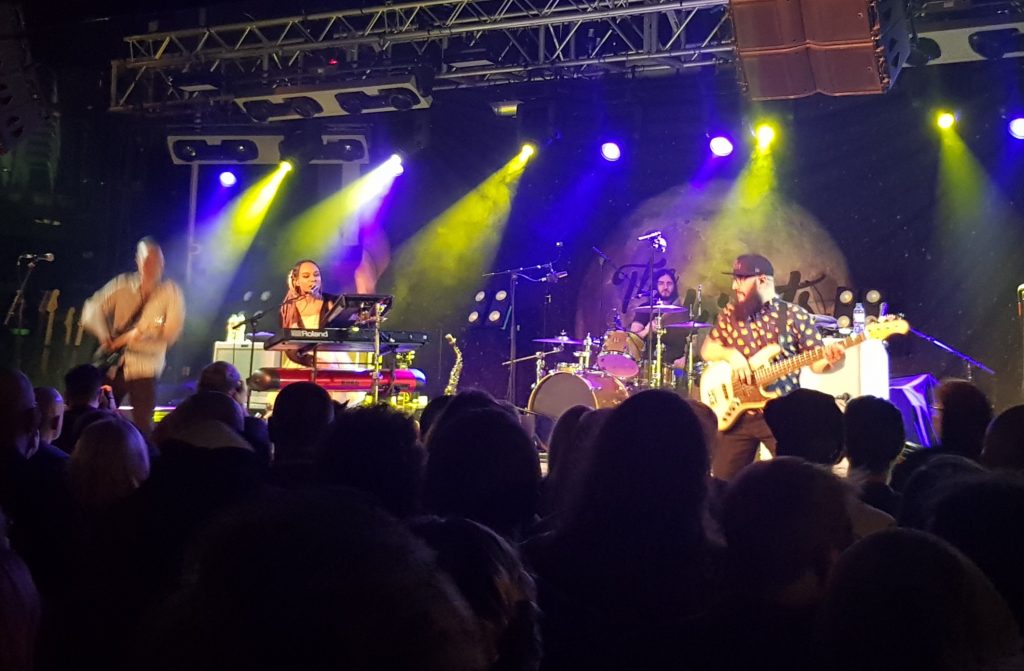 Kicking off with This Town, they had the audience in the palm of their hands from the off. They playfully skip through their four album back catalogue. Tunes like Friends and Business, Ratatat, Rise Up, New kind of Friend are rattled through with a casual ease and a constant smile.

Front girl Marcia nonchalantly moves from keyboards to saxophone, to flute, to electric drums, whilst also holding down the role of lead vocals. She also straps on guitar for a few numbers, including Swimming Lessons, during which they ‘Skank for the verses and rock out for the choruses’, demonstrating why they are on the line up for this year’s Download Festival.

Anyone that had not been warmed up by Buster Shuffle, was now well and truly simmering by the end of the Skints set. The gauntlet was well and truly laid down – a tough act to follow.

But if anyone could follow, it is the Interupters. 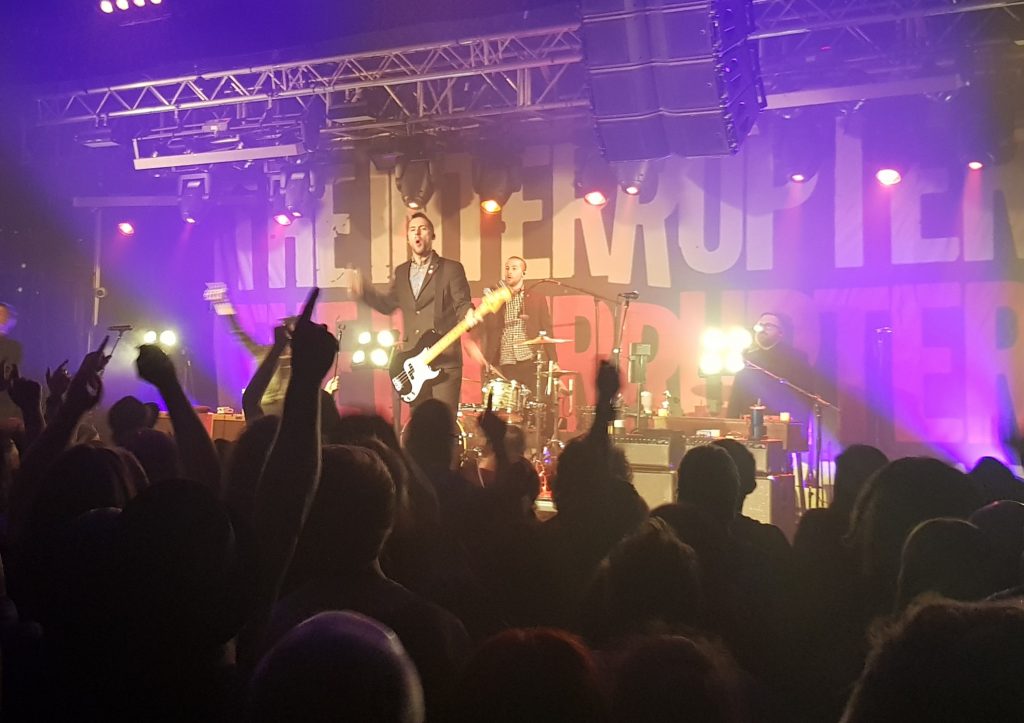 Unusually, three of the band are brothers and the rhythm section are actually twins. With Amiee Interupter on vocals they are a formidable well-oiled machine and one of the best live acts out of the California ska punk scene that also gave us the likes of Rancid.

From the word go,  with the entrance music of the Specials’ Ghost Town fading, they take to the stage like a tornado. The audience is blown back by the intensity of what is happening in front of them.

An interrupters album is special, but live they are a tour de force. Not only are they able to create an amazing noise in the studio, but they are masters of stage craft and know exactly how to get a crowd going.

We get ‘call and returns’, we get leaning over the barrier into the crowd and we get orchestrated mass claps from the audience.

With wireless mics they run all over the stage, climb up on the monitors and lean out into the audience. They burst with style, charisma and panache. They have done this before, and have the show choreographed down to a tee. Even to the point of the lights going out after the third song and coming back up to reveal the band all now suddenly shirt sleeved sans-jackets. 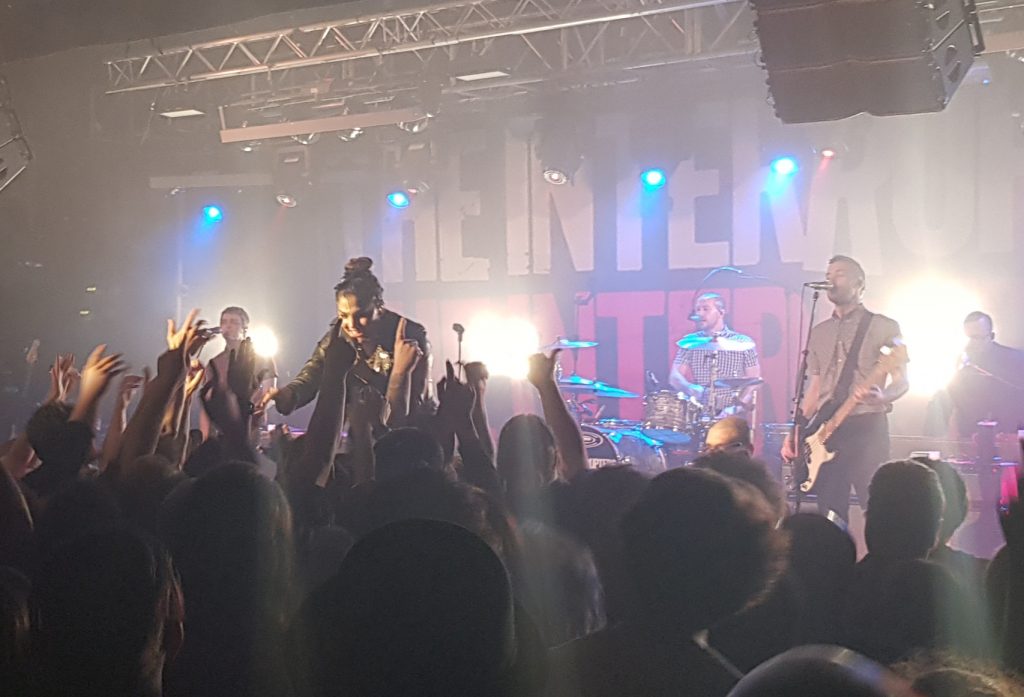 There are no rough edges, they are almost a text book ska-punk band.

I’m not sure who is at the back floating between keyboard and brass, as the album cites several credits, but he manages to add an extra depth to an already polished show.

They have been around since 2011, but their third album from 2018, Fight the Good Fight, is what has really broken them big time. And it is this album that dominates the set list. It’s the one everyone knows.

By the time they get to the lead single off thd Album, She’s Kerosene,  its difficult to see how they could take us any higher and the night comes to a barnstorming climax.

Fully satisfied that they met all expectations, we slowly drift out into wet Cardiff night. There is debate among mates as to whether or not the Interupters are actually TOO good. We like it rough around these ways. But hey, being accused of being too good is no bad thing.

As we head home smiling two things cross my mind. Firstly I feel lucky to have caught this band several times just before they break big. But secondly, a hint of sadness, because I dont think there will be many more opportunities to catch these guys in a sensible sized venue. Nights like this are to treasure.