Public Service Broadcasting put on spectacular show in the grounds of Caerphilly Castle.

Caerphilly Castle is a magnificent monument to how communities rise, fall and rise again in a new form.

Constructed by Gilbert de Clare in the 13th century as part of his campaign to conquer Glamorgan, the castle saw extensive fighting between Gilbert, his descendants, and the native Welsh rulers.

The impressive remains of the castle, dominating the centre of this welsh town, is one of the biggest fortresses in Europe, and the second largest in Britain. Windsor Castle being the largest. It has been uninhabited for over five hundred years now, but is well established as an iconic tourist attraction.

Fitting then, that tonight it hosts Public Service Broadcasting. Their most recent album, ‘Every Valley’, documents the heyday of the coal mining industry, its decline and eventual demise. Just like the feudal lords that once walked the ramparts of the castle, coal mining in South Wales has been confined to history and its memory is kept alive by the tourist industry. 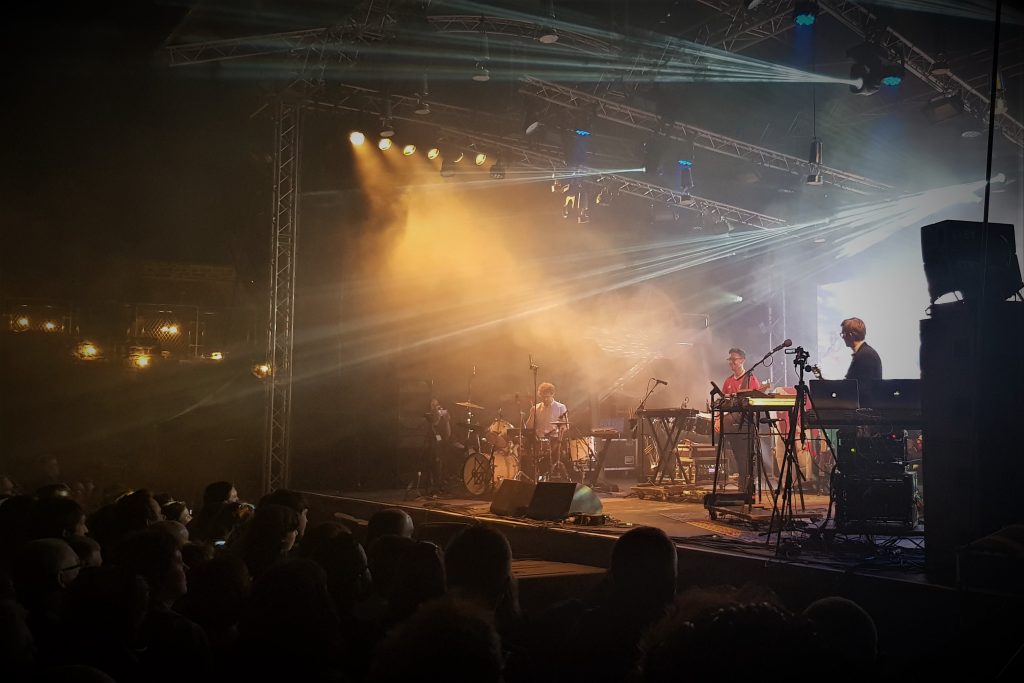 Their set opens with several numbers from ‘Every Valley’, accompanied in true PSB style by relevant visuals and archive footage on the screens behind them. Whilst the English Barons are long gone, memories of coal in Wales are fresh and the album chimes with many of those gathered on the castle green. Some in the audience even contributed vocal samples to the album, which was recorded in the old Miners Institute in Ebbw Vale.

‘Every Valley’ is only the latest album the PSB catalogue. We also get a glimpse of the first two albums, the war inspired ‘Inform, Educate, Entertain’; ‘The Race for Space’, which was inspired by, erm, the race for space; and their most recent offering, the ‘White Star Liner’ single.

The release of ‘Valley’ in 2017 saw a significant change in the live performances of the band. They now actually talk between songs. As in humans actually talking, rather than the pre-recorded announcements and ‘adlibs’ which had been the unique trade mark of the band until then. Whilst that old trick had been unique and amusing, the more human connection with the audience has warmed the relationship between band and audience.

The trade mark visuals and light show are impressive as the sun goes down with the turrets of the castle keep in the background and the quality of the sound from the outdoor PA has a staggeringly impressive clarity.

With a return to South Wales, the question on everyone’s lips, would local boy James Dean Bradfield of the Manic Street preachers, contributor to the ‘Valley’ album, make another guest appearance, as he did in Blackwood recently? He didn’t. But we do get another album contributor, vocalist Lisa Jên Brown of 9bach, to get the hairs stand up on the back of the neck. 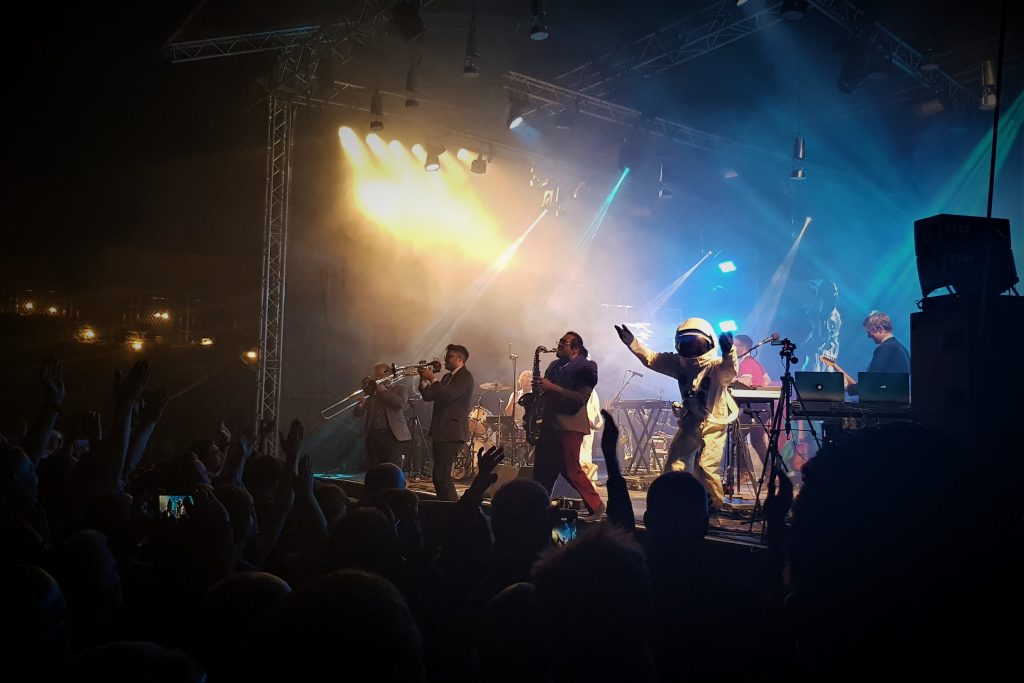 We also get two mystery astronauts on stage to dance along and show bez how to look really spaced out.

For an encore, again we get something unique, the band disappear and the stage it taken over by more ‘Valley’ contributors, the massed ranks of the Beaufort Male Voice Choir. Once again, the hairs on the neck stand to attention.

Choirs can be cool. Who knew?

*An almost perfect night out. We say almost, and we are reluctant to say it, but feel it has to be said, five quid for a 330ml bottle of beer (just shy of £10 a pint) is daylight robbery. But hey, Public Service Broadcasting blow your socks off even when you are sober.