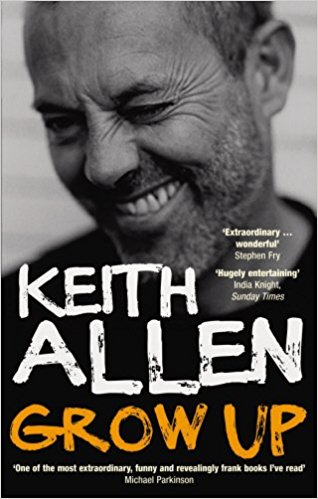 Anyone that has spent a life time working nine to five and paying into a pension will read Keith Allen’s autobiography, Grown Up, and be forced to consider how mundane and safe their life is.

Keith is famous, although famous for what we are not really sure. He has been a comedian an actor, a pop star, columnist, director and, well, a hell raiser.

The only thing that has been a constant through his life is his ability to land himself in trouble, but somehow still manage to come out smelling of roses at the end of it.

His misspent youth (or should that be well spent interesting youth) saw him on trial to be a professional footballer and on trial for robbery. He spent time in nick, hitchhiked across Europe, did a series of jobs he hated, ran away a lot, slept with loads of women and smoked a lot.

From playing darts when on amyl nitrate to walking lions in the park; from performing in Harold Pinter plays to sitting around campfires with Joe Strummer and Damien Hurst; from putting distance between himself and the children of his first marriage to lovingly embracing the kids from his second marriage (or was it his third, we lost track in the end). It’s all here. And more.

Knocking up a list of the projects he has been involved in would result in a bullet point list as long as your arm. Each project entered into with gusto and each shuffled off once complete. No laurel resting here.

Never before has the term ‘warts and all’ been more appropriate. This engaging book is well written and enjoyable. Where there are some books that you pick up every time you have five minutes spare, I found myself picking it up when I didn’t have time to spare and going out of my way to make time to read it. This book is ten years old now, but he has not yet grown up, he still leaves havoc and smiles in his wake. Keep your daughters locked up for a little while yet.