White Riot is the Story of Rock Against Racism and how a handful of music lovers motivated a cultural backlash against the rising tide of racism and fascism in the late seventies.

Utilising archive footage, modern and contemporary interviews, this film looks back on a Britain forty years ago which viewed through twenty first century eyes, seems like another continent. 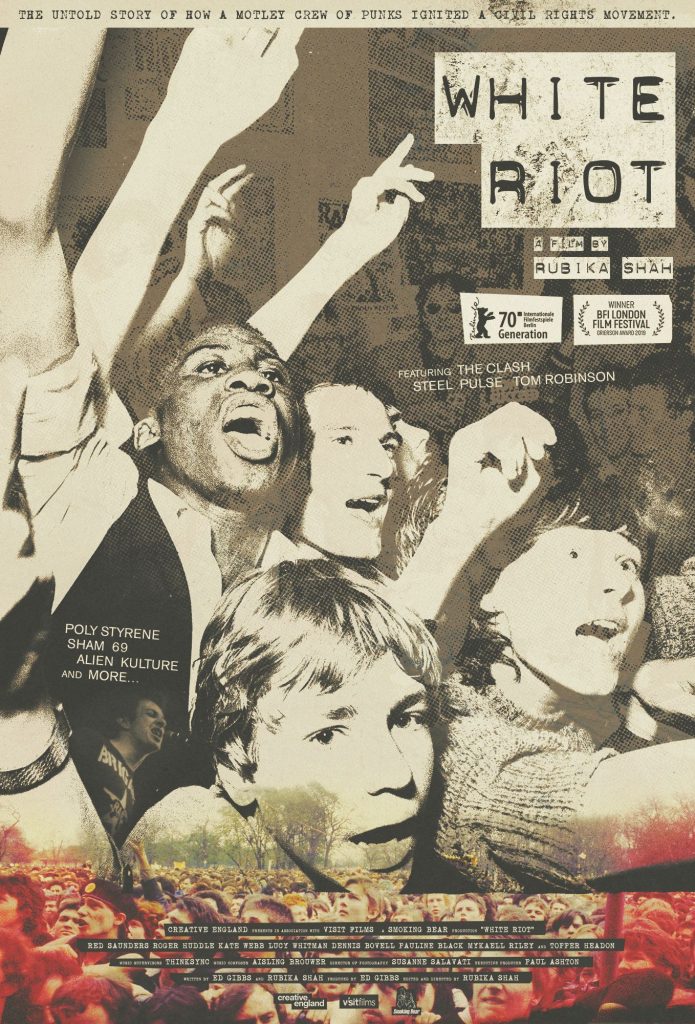 In the 1970s racism wasn’t as subtle as it often is today. The term Nig Nog was used in TV comedies without raising eyebrows, the police quite openly treated black people differently and far right political parties didn’t feel the need to disguise their racism as standing up for British values.

The National Front were openly calling for non whites to be ‘repatriated’ to the country of their ethnic origin, even if they and their parents had been born here.

There was open conflict on the streets with the NF deliberately and provocatively marching through black neighbourhoods, often with huge numbers of police protecting them. And we are not talking just keeping the peace, we are talking about the police attacking any counter protestors.

Black people were often arrested on ‘suspiscion’ of loitering with intent. People were charged with things like ‘On a date unknown, you conspired with people unknown to rob people unknown’.

Dennis Bovel did three months for allegedly inciting the crowd at a sound clash to attack the police. When his appeal was successful he was told he should be grateful that he hadn’t served the original three year term.

On top of all this Bowie and Rod Stewart were making dodgy comments and Eric Clapton stood on stage in Birmingham openly supporting Enoch Powell and calling for ‘wogs’ and ‘coons’ to go back home.

In response a group of anti racists, including Roger Huddle and Red Saunders, set out to take the cultural high ground. They famously wrote a letter to the NME and Melody Maker. It was a call to action that generated a massive response.

In the days before the internet and social media people from all over the UK managed to network by letter and telephone,  resulting in a nationwide network of RAR groups putting on gigs.

It was a risky business because there were a lot of people who didn’t like the idea of multi cultural gigs with black bands and white bands sharing a stage. The British Movement turned up en mass to disrupt a gig with Sham 69 and Misty in Roots. The RAR offices in London were even fire bombed and Red Saunders had a bullet in the post.

This just happened to coincide with the birth of punk rock. Bands like The Ruts, 999, X Ray Spex, Tom Robinson, Sham 69 and Crisis were quickly on board. Even Johnny Rotten supported the cause but the Pistols didn’t actually play a RAR gig.

In true punk style they had their own fanzine ‘Temporary Hoarding’ which touched on not only anti racism but anti sexism.

With gigs, zines and frequent mentions in the music media they were streets ahead of ‘the fash’ in the cool stakes so were able to attract young impressionable minds that might otherwise have been attracted to the dark side.

The pinnacle of the movement was a Carnival in Victoria Park on 30th April 1978. The organisers had no idea how many would turn up but on the day in the region of 100,000 turned out from all over the country to watch X Ray Spex, Steel Pulse, The Clash and Tom Robinson.

The Carnival is an explosive climax to the film – although not the end of the story. There were were other gigs and  carnivals in London and beyond

Billy Bragg is just one of many that has said RAR inspired him to get into politics and music. RAR wound down in 1982 but its legacy lives on to this day. Dozens of anti racist gigs are still put on each year up and down this green and pleasant land and scenes such as ‘anti fascist punk, ‘anti fascist oi’ and ‘anti fascist ska’ thrive all over the world. Love Music Hate Racism even tried to recreate the RAR vibe from 2002 onwards.

The film is a fascinating insight to what went on behind the scenes. There are interview with Topper Headon, Pauline Black, Dennis Bovel, Tom Robinson Roger Huddle and Red Saunders.  Also a band we had not previously been aware of, an Asian punk band called Alien Kulture.

For those of us old enough to remember those days we can smile with nostalgia and cringe at some of the things we once took for granted, like ‘Love Thy Neighbour’. Younger viewers will probably be shocked with the state of their parents country. But anyone with a dislike of bigotry and intolerance should get something out of the movie. Even if they dont like the music. If you’re into Gang of Four, The Clash and Matumbi, you’re in for a treat.

Our only complaint would be the film ends with the 78 carnival, there is much more to the story than that. But sometimes it’s good to ‘leave em wanting more’. And unfortunatley – we need more, because the fight still goes on