‘What an old codger I am’. No, not a statement of fact, but the B-Side to the Stranglers’ ‘Nice and Sleazy’ single, which was taken from the ‘Black and White’ album. It was just about the only song from that period they did not play tonight, as the Black and White tour stopped off in Cardiff University Students Union.

The ‘Black and White’ album, released in 1978, was the first album a teenage me went out and bought the week it was released. It came with a limited edition free single with the Stranglers performing Dion Warwick’s ‘Walk on by.

The Stranglers were also the first band I ever went to see live, in the old Top Rank in Cardiff. The Top Rank is long gone, but the Stranglers are alive and well and still gigging, all be it with a modified line up.

Drummer Jet Black is still a member of the band but at the ripe old age of 77, he rarely sits at the kit for live outings these days. Guitarist Huw Cornwall left the band in 1990, considering the band to be a spent force musically.

As a kid, I was a massive Stranglers fan. The ‘Black and White’ album (their third) was probably the last good album they released though. It was followed by ‘the Raven’, which was experimental to say the least, and a massive divergence from their punk roots (although they had been around a good few years before punk came along and many punk purists always claimed they never were punk – but that is a whole debate of its own). I gave ‘the Raven’ the benefit of the doubt, but by the time ‘The Gospel According to the Men in Black’ came out in 1981, the Stranglers were in my rear view mirror and I never went to see them again – until they turned up at a festival I happened to be attending anyway, Bearded Theory in 2014.

Then it was announced that they would be touring the ‘Black and White’ album again and the good ship Strangers would be dropping anchor in Cardiff. So it made sense that most of the set would be from the period when I still rated them. I am not sure if this on its own would have persuaded me to go and see a Cornwall-less Stranglers, but that set at Bearded Theory had won me around to the idea that they are still a half decent live band. Then thrown into the mix was my mates at Orchard Promotions coming up with a photo-pit pass and bang, it would be rude not to go.

The Stranglers always had a distinctive sound that set them apart from anyone else. Whilst Cornwall was a brilliant guitarist and they will never find a replacement to match him (although they did for a brief period work with John Ellis from the Vibrators, another of my favourite guitarists), the two things that really set them apart were the bass and the keyboards. And they are the two constants that are still in the band.

Jean Jaques Burnell still reaches depths with his bass no other player can – at one point the whole venue was rattling from the low frequencies. And unlike most bass players, he does not sit in the back simply fitting into the rhythm section, the bass is at the front of the sound, with riffs many lead guitarists could not provide. The only difference tonight is that he is smiling most of the time. Back at that first gig I recall him jumping into the audience several times to practice his martial arts on leery punks.

And the keyboards still form a vital part of the sound, rolling and rippling into the mix riffs that would stand alone without the rest of the band – like a punk rock version of The Doors.

Walking on stage to a massive roar from the gathered disciples of the church of the Stranglers, with no messing they launch into ‘Tank’, and roll through the first half of the set as if they wrote it yesterday, not thirty eight years ago. Baz Wayne, formerly of the Toy Dolls, is up to the job on guitar and only a churlish fan looking for faults would find any. But then, he has had fifteen years in the band to get his shit together.

We were getting our money’s worth tonight though. With ‘Black and White’ in the bag, we still had another hour’s worth of back catalogue to come. I was apprehensive, having given up on the band in 1980, I was not sure if I would be familiar with, or more importantly like, what was to come. I needn’t have worried though. With the exception of ‘Nuclear Device’ from ‘The Raven’ album and I think maybe one or two others I did not recognise, the rest of the set was made up almost entirely of numbers from their heyday of the first two albums. ‘Something Better Change’, ‘Goodbye Toulouse’, the single only ‘Five Minutes’ and the rather dubiously titled and often misunderstood anti-racist tune ‘I Feel Like a Wog’ are among the songs I can remember. Only when they reached their most angry and energetic was the absence of Huw Cornwall noticed (well, by me anyway). 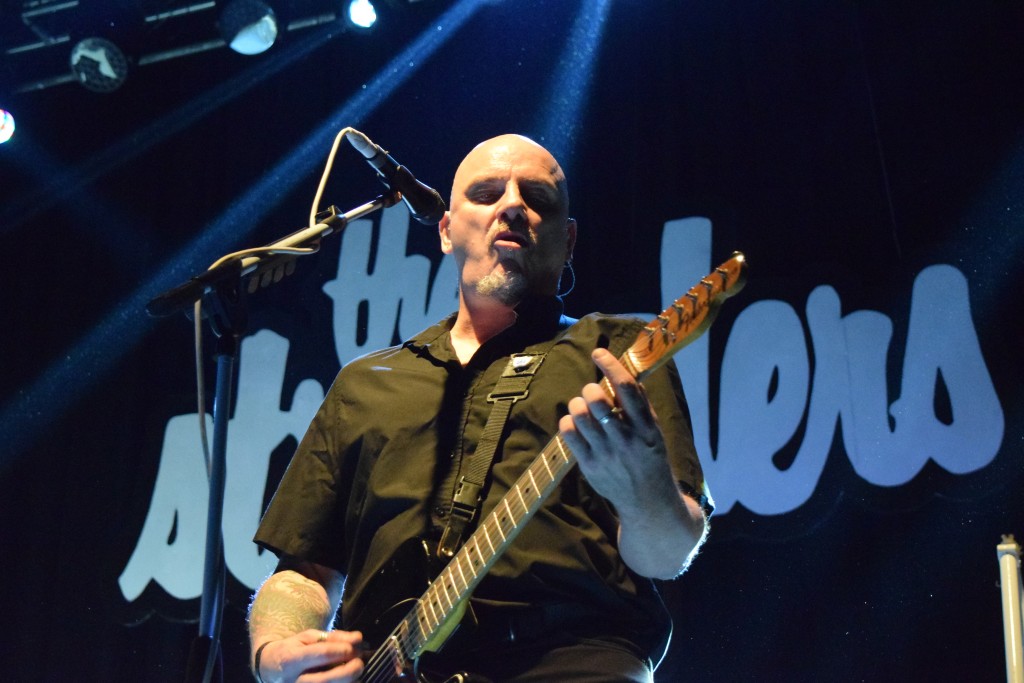 I am not sure if anything can be read into the set list. Does it mean that mean they realise that they have not written anything decent in the last thirty five years? I doubt it. It was probably a reflection that a tour of the Black and White album was going to bring out the old heads and they would want to classics.

Having said that; very often when old-skool punk bands roll into town the venue will fill up with old-skool punks, just balder and wrinklyer. Tonight though, most of the audience looked like they were never into punk in the first place. Perhaps this a reflection of how broad an appeal they have had with their diverse music over the years. Perhaps it is confirmation that the old guard of punk never truly accepted them. Who knows, the room was full of smiles at the end, so who cares.

And to keep them smiling and give them their money’s worth, we get three encores (I think it was three, I lost count), with ‘Burning up Time’ and the non-album B-side ‘Go Buddy Go’ included in the run up to the finale of ‘No More Heroes’.

Then off out into the night with discussions about meeting up to catch John Otway and Wild Willy Barrett in the Globe next month. What an old codger I am. This time, it is a statement of fact.

To see more images from the pit that night, go to our Flikr Album