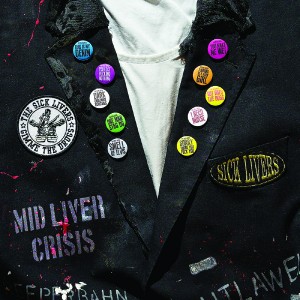 Ever since Chuck Berry first picked up his guitar the term rock ‘n roll has been evolving. It is now used to describe anything from a Motorhead gig, through the act of throwing a TV out of the window to cookery. The Sick Livers, however, are as close as you will get in the 21st Century to the true meaning of rock ‘n roll without donning beetle crushers and a drape jacket.

They kick off with a song about fashion – and giving a nod to the film Full Metal Jacket (This is my Denim), then rattle through songs about girls (You Make Me Wet), songs about drinking (One Man Stag Do) and sometimes about girls and drinking (I Wanna be a Jager Girl).

We get ten songs that mean this album could not be more rock ‘n roll if it came with a free flick-knife and a bucket of Brylcream. Clearly this aint the 1950s though so it is inevitable some of the music of the last sixty years has influenced them, most notably the attitude of punk rock.

Serious no-frills rhythm section, kick ass guitar licks and vocals that manage to be deadly serious but tongue in cheek as the same time without ever sounding like they take themselves too seriously or ever being actual comedy.

Get it while it’s hot.