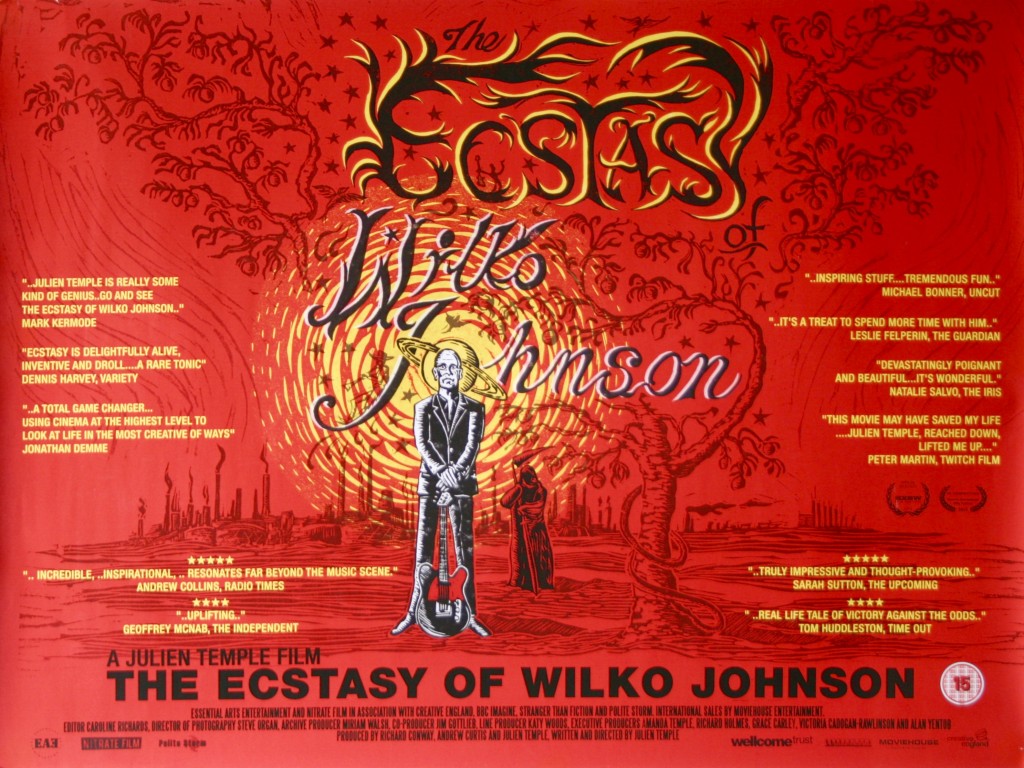 In 2013 Wilko Johnson was diagnosed with inoperable pancreatic cancer. The Ecstasy of Wilko Johnson is a peak behind the curtain to find out what went through his head and how he dealt with it.

The legendary former Doctor Feelgood guitarist tells of how, after getting the diagnosis, he became ecstatic, suddenly acutely aware of the surroundings that he will not be able to experience for much longer.

We then get philosophical musings on the meaning of life and death, whilst he sits on the jetty on Canvey Island, playing chess with the grim reaper. There’s a mixture of clips from old movies, animation, home movies and photographs to illustrate what is going through his head.

Mixing philosophy and recollections from his childhood we are able to slowly put together the jigsaw of the mind of Wilko. Whilst insightful, it does wander about a bit and it occasionally goes over old ground from the Dr Feelgood movie, ‘Oil City Confidential’.

Aside from the philosophy, we get bits and pieces of how he lived life after the bad news. Touring Japan, recording an album with Roger Daltry, and hitting the road one last time.

The biggest criticism would have to be that the balance is out a little. Too much philosophy and not enough documentation of being in the studio and so on – but it’s not really clear at what point they decided to make the movie, so it is quite possible that none of that stuff is actually available.

We think we can get away with revealing there is a happy ending. As we type it is fairly well known that Wilko is still alive, so we can reveal that he has a few years left in him without spoiling the movie. However we will avoid revealing the twist of fate that led to someone drawing the conclusion that maybe the inoperable diagnosis was not correct. That was probably this reviewer’s highlight of the film.

It is a remarkable story that led to a sell out farewell tour (we all thought he would be gone), a hit album and a book. A marketing mans wet dream if we are cynical, but clearly this was no made up story, the man suffered and still suffers.

Towards the end of the film Wilko shows us his scars, clearly relived to be alive, but commenting that he is almost pleased to have gone through it all. Almost.

Poignantly, he also comments, “Save the NHS, it saved me”.

If you are expecting a story with lots of music, you will be disappointed, but it is an incredible insight into mortality and the workings of the mind of a man who relishes everything life throws at him. Very few would have taken the glass half full approach he did to his believed last ten months on earth.