Long awaited second album by One Eyed God finally sees the light of day. And it’s a corker. 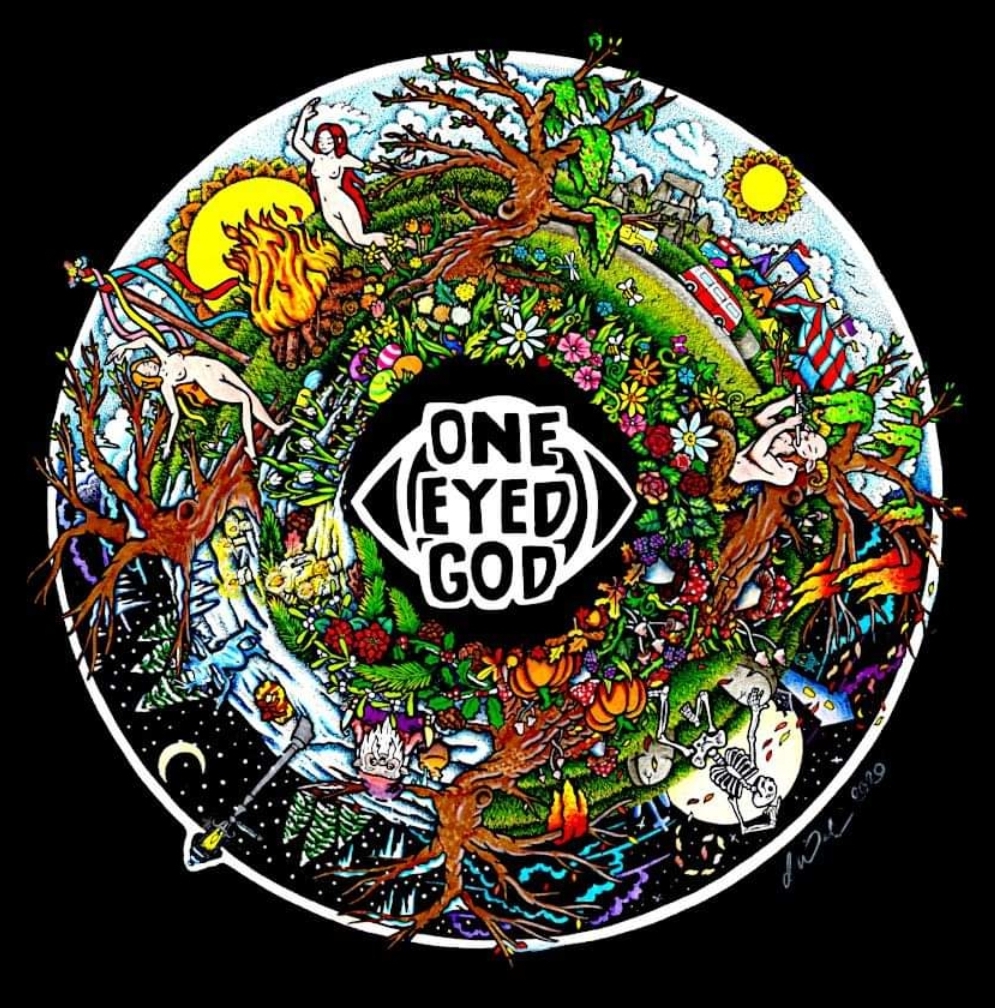 St Helens’ One Eyed God have been on the festival scene since 2015-ish, and have always been worth a watch. Their set always had flashes of brilliance to get the toes tapping and the face grinning. So, when we saw their name on the line up for Feral Fest back in 2021, not catching them was not really an option we had considered.

Something was slightly different though. There was only one flash of brilliance, it started with the first chord and ended with the last.

At that time they had demo copies of this album with them, so I was on it like a flash. And it has been pretty much jammed in the CD player ever since. If ever the term ‘all killer, no filler’ was appropriate – this is it.

The album finally officially hits the decks on vinyl and CD on 25th February 2022. We asked the band why the delay.

Rex Holmes (bouzouki yes, bouzouki, they are not your average punk band) explained: “We intended to release it at Bearded Theory in 2020 but we all know what happened that year. Then Mad Butcher said they were interested in distributing the album so we put together a plan with them. But then there were supply issues during the manufacturing so the whole thing has dragged on until now! Getting a suitable venue for the launch event was also hard due to restrictions hence the 25th February date”.

While we were at it, we thought we would ask what has changed since the first album.

Rex: “I arrived about a year after the last album, adding a folk influence with the bouzouki, and Cav arrived about three years ago giving the band a different voice. Ste (the original guitarist) had also left by the time we got to recording the next album so that will have influenced the sound as well. It’s these changes that make our album output so sporadic, I guess”.

And that folky element is in ya face from the opening of the very first track ‘Break of Dawn’. A brief diddly melody on the old bouzouki is swiftly followed by a high-octane folk punk attack including flute from Dai (Dai the flute, not to be confused with Dai the drum aka Buzz, or Dai the bass, aka Davi) to make it stand out from your run-of-the-mill punk rock. It’s a proper festy number about staying up all night “Drinking ’til the break of dawn.”

Rex: “The lyrical content shows what matters to us or makes us angry about the world more than anything. Homelessness is a big problem in St Helens, like a lot of places, so it’s supporting Teardrops (the local homeless support) with donations from home and work is the main thing we do these days. That, and the cats”.

Yes. The cats. We have heard about the cats

Rex: “I was lodging with Dai when Dai and Jo got together. Jo brought some rescued cats with her when she moved in and it’s just gone from there. If you search ‘Crusty Cat Rescue‘ on Facebook you’ll find us (donations welcome).

“The sad truth is we’ve kind of had to become a cat rescue: the amount of amateur ‘breeders’ treating pets like handbags or shoes is disgusting. ‘Professional’ ones aren’t much better to be honest! Also not neutering cats which, given that discount vouchers from the Cats Protection League can make it as cheap as a fiver, is massively irresponsible in urban areas and just increases the problem and suffering.”

By track three, ‘Bare Bones’, the flute is back in the box and Dai has got the saxophone out. It’s an instrumental knee jerker, as I’m typing, I’m skanking away here and the table is shaking. ‘Singularity’ keeps up the skanking rhythm – till it gets punky.

‘Rubberface’ is possibly our favourite – but that might just because it was the first track we heard when it appeared on a benefit album for Abortions Without Borders and was the first hint that the album was going to be a corker. It is rawkus, diddly and yet again, one that makes you want to bounce about. But what the hell is it about?

Rex: “Buzz (Dai the drum) arrived with a song about a character called Rubberface who would steal people’s rats. But that was deemed a bit too random, so it evolved into themes of lives wasted by the treadmill of capitalist exploitation and the mental health issues that come with that (Living in concrete, looking for a remedy… What a waste, took my life away… etc). We did change the title to ‘What A Waste’ for a time, as they are the actual lyrics, but it felt weird calling it that so ‘Rubberface’ prevailed.

The title track, ‘A Land fit For Heroes’, touches on that increasingly disgraceful issue of homelessness in the UK. “Where foodbanks are full coz you’re earning fuck all, You bang your head on bureaucracy’s wall, Persecute Travellers for living off-grid Stick ’em in a box and screw down the lid”.

The topic of animal welfare crops up again with ‘Zombie Casserole’. “Free the lonely chickens! Gotta be something better than that!” Whilst ‘Guerrilla Manoeuvres is a call to arms.

The bouncy ‘Algodon’ had us confused. Our favourite search engine revealed that Alogodon is a type of cotton, but the song appears to be an antifascist tune

Rex to the rescue again: “Most of our songs have two names. What we call the songs are usually different to what the ‘official’ names are, linking into the surrealist lyrical creation. In this case: the song was originally an instrumental with the name taken from the washing instructions label on a Mexican wrestling mask. Then Dai had this anti-Nazi verse which seemed to work, so Cav and I smashed out some more lyrics along the same lines. However, a title we liked still eluded us so the original name prevailed”.

Yes, that’s right, washing instructions for a Mexican wrestling mask. I’ll just leave that one there.

Of course, when you’re having a good old stomp, sometimes you don’t want to have to think about deep and meaningful lyrics. If that’s you, then ‘Gummy Cat’ is a full-on stomper and appears to be complete nonsense lyrically.

Rex explains the song writing process: “A lot is Buzz and I as we’re a bit of a team: Buzz has a gift for vocal melodies, but the words themselves are usually very surreal or sometimes even gibberish. I’ve been told I’m quite eloquent, so I take the melody and hammer out something more relatable to the everyday world. Not that we hate the surrealism – in fact it usually has us laughing our arses off in the studio (Gummy Cat is actually about a cat made of jelly sweets)! The spoken word, angry stuff is almost always Dai’s input showcasing his poetic side. And despite most of the songs already being written when Cav arrived, his ear for an anthem and harmony means his lyrical contributions appear on the album as well.

‘Another Day’ is an appropriate tune to sign off with, telling people to ‘Never Give Up’, no matter what life throws at us.

In summary, this album ticks all the boxes for us. Punky, diddly and skanking with the politics in the right place. They are not unique when it comes to mashing up different styles, but there aren’t many bands out there that do it this well. This album has classic written all over it, you will be listening to this for years to come.

rock over to here to buy it