They were years ahead of their time in 1974. Then they split. Now they are back.

The Hollywood Brats are the stuff of legend. They are a true cult – possiby a bunch of cults. Uncompromising to the point of being self destructive, they split in 1974 before anyone could understand them – and indeed a year before their album finally got to see the light of record shops.

In 2015 Singer Andrew Matheson published his story of the band – and it turned out to be one of the best music books ever written – even if it is about a band you have never heard of (review of book here). To acompany it, the long lost 1975 album was also remastered expanded and reissued. (CD review here)

If that were not enough, lock up your daughters (or should that be grannys), they are about to perform together for the first time since 1974. 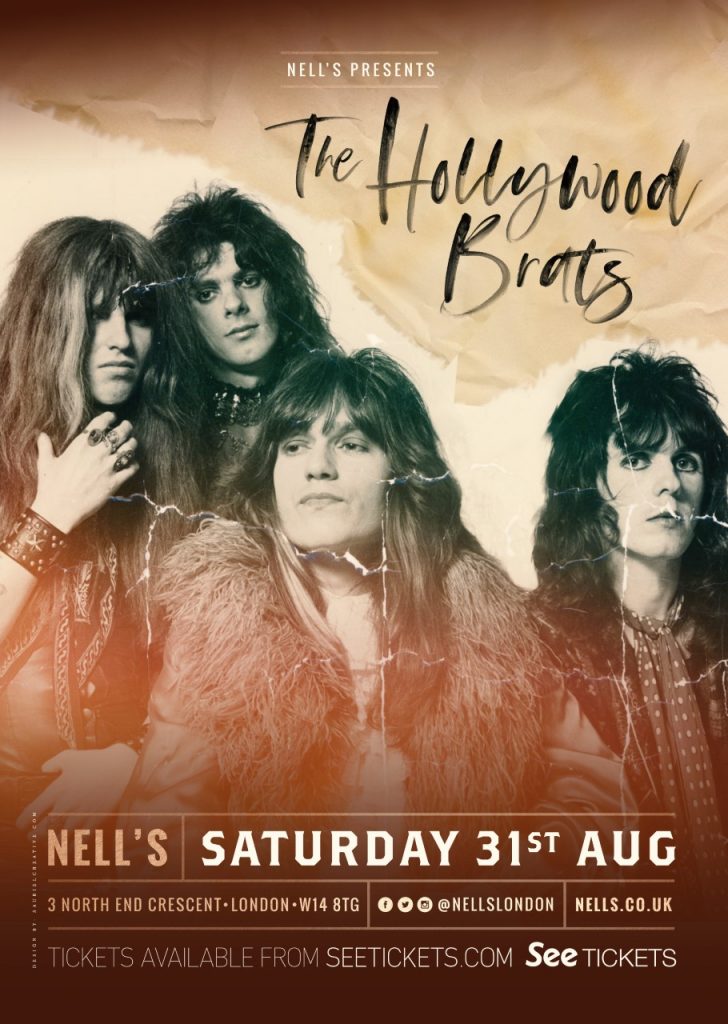 If you find yourself in London Town
The Hollywood Brats will be playing their first gig since August 1974.

Centre of the World

But I just want to warn you

Find something else to do

What could possibly be the allure?

Casino Steel is a legend of course. He is a silver-haired fox, a blue-eyed handsome man, a chap that ladies adore and men try to lead into public toilets for deviant dalliances.

Casino has had many hit records some of which are very, very fab
I would absolutely go to see him play a gig

Me? Andrew Matheson? I am a wretched shell of a man with few redeeming qualities. Well, perhaps a stunning wardrobe. But there is not much else to recommend me

Brady? Ah, now there is another matter. Even the most ardent Hollywood Brats fan may not know this but Brady has been cryogenically frozen since he started losing his hair in 1983. Yes, some may call it a drastic step but the Brats just cannot tolerate hair loss.

Thus it came to pass that me and Cas with the permission of Brady’s mum, the ancient and fragrant Josie MacIntyre, smacked him in the chops and sent him off in the hold of an Egyptian steamer, wrapped in cellophane, down among the frozen sardines and sent him off on an involuntary voyage to California
Land of the beautiful, the damned and the deluded

From there he was immersed in a cylinder composed of three parts stolen beer dregs, two parts liquid nitrogen and eight parts bitter tears of crushed disappointment

Then he was shipped east to Arizona

And there he has stayed Through all these desolate decades

Six weeks ago our lawyers contacted the Shwartzenhiemer Clinic in Scottsdale, Arizona and, even as I type these words, Brady is being thawed out.

The granddaughter of the clinic’s founder, a certain Miss Eva Braun-Shwartzenheimer, informs me that Brady is responding well to a blowtorch to his ice cube and at the moment he resembles a popsicle on the hood of a ’64 Corvette in Las Vegas in February

Melting but fighting it

He’ll be fine on the night.
We don’t ask much.

Anyway all you people out there
Stay away

If you just can’t help yourself