The story of the Hollywood Brats, the missing link between glam and punk.

The Hollywood Brats wrote and recorded one of the greatest punk tunes of the first wave of UK punk rock. Unfortunately, when they wrote it, the world was not ready for them. They were a few tantalising years ahead of their time. The Damned had yet to find their New Rose, The New York Dolls had only just been diagnosed with a Personality Crisis and joe Strummer was still only thinking about forming the 101ers, let alone the Clash. The world was not yet ready for Sick on You. 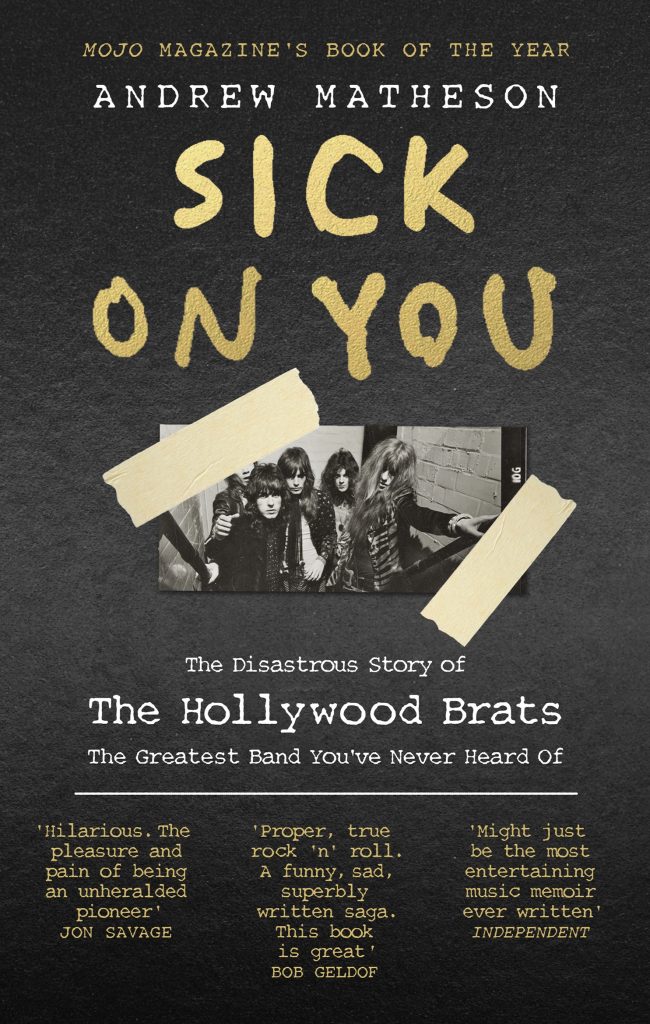 Before that could happen there was the small matter of actually forming a band and recording some music.

Written by Andrew Matheson, the band’s singer, this is a tale of living on the edge. A tale of searches for band members, finding them, then losing them. A tale of living in rat infested hovels, slum landlords, squats, breaking into gas meters and burning furniture to keep warm. A tale of being misunderstood by just about everyone, falling out with people trying to help you and grabbing defeat from the jaws of victory.

Along the way they rub shoulders with the likes of Queen, work with Andrew Loog Oldham and win over Keith moon as one of their biggest fans.

They play ill-judged gigs to hostile audiences, before briefly finding a fan base and eventually record an album, but struggle to get it actually released.

Sick on you would eventually have to wait for the Boys to record it for it to receive the recognition it deserved.

The story on its own would be entertaining, but throw in Matheson’s eloquent wit and this book swaggers like a droog with a flick knife. From the intimate details of getting rid of pubic crabs with Dettol, through the horror of waking up to bat wielding bailiffs with dogs, to uncompromising criticisms of the state of music in 1974, the book is page after page of laugh out loud tear inducing stories.

It is one of those books to be enjoyed even if you are not familiar with what the music actually sounds like – which is just as well because there aren’t many people that have heard them. Best music autobiography ever? Mmm. Tough call. But you know what – it might just be.

Check out our review of the acompanying album