Last time I yomped up a mountain I was thirty years younger and ten stone lighter. My excuse has been that none of my mates are interested in that sort of masochism, but when the Socialist Hikers and Anarchist Trekkers (SHAT) was formed, that excuse disappeared.

So, at the crack of mid-morning we headed up to the Brecon Beacons for a yomp up Pen-y-fan. The great wide open, far from the madding crowd on a crisp spring morning, what could be better? What could go wrong?

Well, from the nightmare trying to find a parking space in one of the two big car parks it was clear that we would be anything but far from the madding crowd. But we eventually managed to get the SHAT together and persuade random strangers to take photographs of us.

The first question we asked ourselves was – which way is it? Well, as none of us really knew what we were doing, we decided to go with the flow and follow the crowd. And boy what a crowd it was. It was like Queen Street in Cardiff on a Saturday afternoon. Half the crowd looked like they were on their way into Top Shop, the other half looked like they were on their way out of Millets. SHAT, on the other hand, nobly stood out from the crowd by looking like we were coming out of a charity shop.

Off we went, with no care about speed limits or heart attacks and sprinted off like mountain goats on a promise. In no time at all we were half way up.

As luck would have it, I had a phone call half way up that had to be dealt with so I told the others to go on. Several phone calls later, I set off on my own. This time I had Stewart Lee* to keep me company on my trusty MP3 player (how did we manage in the days before You Tube to MP3 converters?). Setting my own pace meant I had time to admire the view and take the odd photograph.

The South Wales Valleys can be grim on times but you are never far from countryside (they are called valleys for a reason) and within half an hour’s drive we can be in the Brecon Beacons National Park. This is something that is often taken for granted, but should not be. You would have to be pretty cold to not be moved by the scenery we have on our doorstep. They don’t call it God’s Country for nothing.

When I got to the top I had a bit of a shock, it was not the bloody top, there was a deceiving change it gradient that meant the horizon you can see at the bottom was merely two thirds of the way up. God does like his little jokes doesn’t he!

When I eventually got to the top I discovered you can see as far as Australia in one direction and Canada in the other.

No sign of the rest of SHAT at the summit, they had obviously gone to play on the rim – or is it ridge? So I parked there for half an hour, taking the time to sit and admire the view, watch the madding crowd sprint past ignoring the view and listen to the genius that is Stewart Lee ramble on about not writing.

As Stewart brought his lecture to a conclusion, I switched to a selection of tunes short listed for this week’s radio show, girded my loins, and headed back downhill.

Whilst coming up hill was a challenge to the lungs and the heart. Going downhill was a challenge to the calves. My legs felt like their brake discs were on fire. The National Park have very kindly placed lots of stone on the track, which I am sure is a big help in the winter, but when there is no snow and ice to be seen, it is a bastard to walk down. This did not seem to be a problem for the lunatics that were actually running down – yes running down (did not seem them smartarses running up, now that would have been impressive). 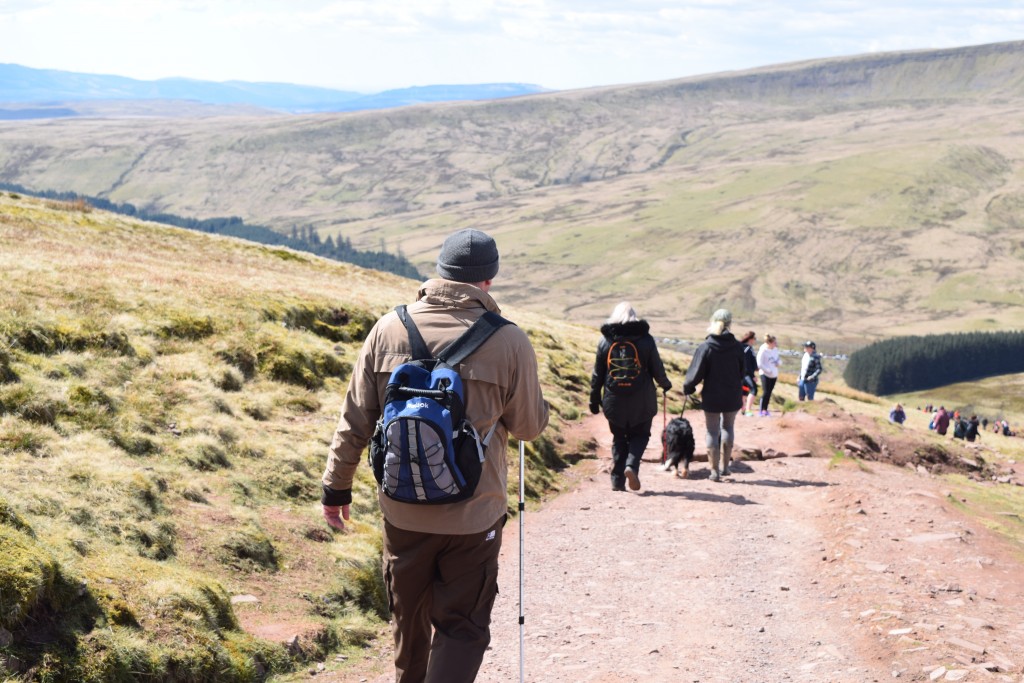 Half way down the slowcoaches of the rest of the SHAT team caught up with me and we finished the walk as we started, as a team showing solidarity and comradeship.

Once back at the now overflowing car park the SHAT mobile catering van was opened up and our chefs tried to warm some veggie sausages and burgers on a disposable barbeque. After half an hour we decided that taste was not the important thing, it was the thought, so we politely munched on luke warm half cooked burgers in a bun.

The SHAT then dispersed, with cries of ‘we must do it again sometime’ and I went off to climb another peak solo to round off the day (trying to get up the stairs in the house with no energy left).