It might be a Sunday, but the Dubioza Kolektiv have no intention of letting this weekend end with a whimper.

Covid 19, Brexit, Pretti Patel’s hostile immigration policy. Even war raging in Ukraine.  None of these things will stop these guys bringing their party to the UK. They are, after all,  no strangers to war. Hailing from the Balkans, these guys prove that music can cross bridges, with members coming from countries that, not that long ago, were engaged in a bitter war with each other. Most notably Bosnia Herzegovina and Serbia. Unlike certain other bands that live on the Balkan Beats thing whilst living in New York, these guys are the real deal.

Once upon a time (2003) in a far away land called Bosnia and Herzegovina, a group of friends decided to form a band. But this was no ordinary band, and they did not form under ordinary circumstances. True, along with local Balkan flavors, musical influences came from all over the world: ska, punk, reggae, electronic, hip-hop. Yet, there was no music industry, few concerts, no space for cultural or political expression among the new crop of plugged in youth. In fact, the entire region was reeling from deep moral and economic stagnation. It was from this environment that Dubioza Kolektiv was born, and not quietly, but kicking and screaming, presenting no-go topics front and center, and demanding to be heard-and in doing so, they created a phenomenon. And it has continued in this fashion ever since.

Almost two decades on, with a ten albums and countless gigs under their belts, the band occupy an interesting space. They are not really a household name, but mention their name and anyone that has seen them will burst into a grin and gush superlatives about how amazing they are. They draw sizeable passionate crowds and their name regularly appears reasonably high on the bill of the most discerning festival line ups. 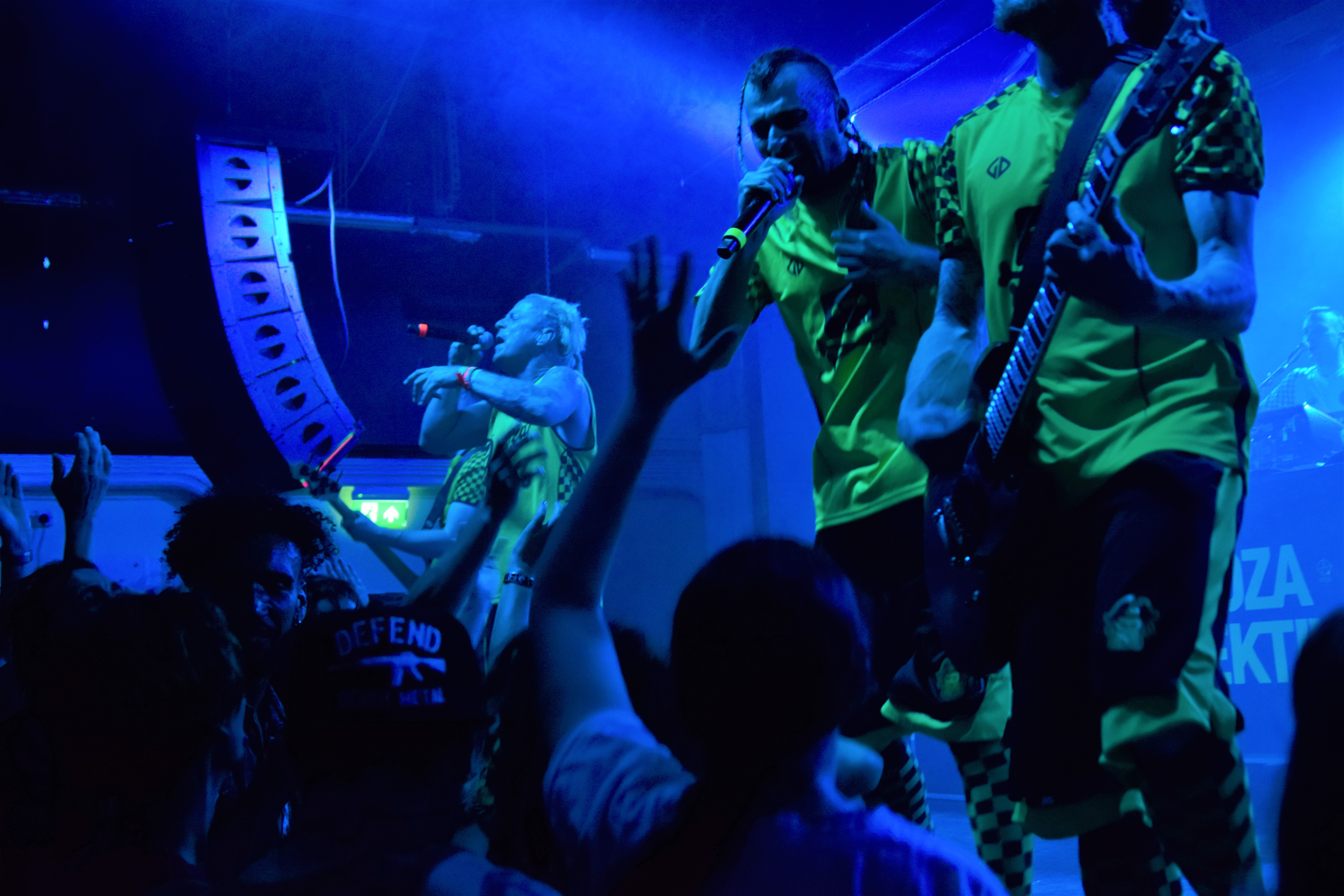 The status they have achieved is down to hard work. They shun the music industry and are one of the best examples of how you can be DIY and successful.

Dubioza kolektiv has made all their recent albums available for download free of charge on Bandcamp and their website, also uploading them onto The Pirate Bay. Their song Free.mp3 (The Pirate Bay Song) pays homage to the peer-to-peer website and its jailed founders, lampoons global pop culture and political figures including Kim Kardashian, Miley Cyrus, and Barack Obama, and explores copyright in the digital age, internet privacy, and freedom of information. The song and music video were subsequently featured on Pirate Bay’s homepage.

Instead of monetising their songs through intellectual property, Dubioza has instead been committed to exploring alternate modes of generating income as artists, including promoting their live performances instead of record sales, marketing the group’s merchandise, and soliciting cryptocurrency donations, while regarding the traditional mode of music industry income generation as “outdated” and unfair to the artists. Dubioza believes in free exchange of art, ideas, and knowledge, with the audience voluntarily deciding whether they wish to monetarily reward the authors depending on whether they like their work. The band has also stated they found releasing albums online has strengthened their bond with their audience.

Whilst they have shunned the traditional music industry, they have taken on some of the tools of capitalism and bent them to their own ends. There is undoubtedly a ‘Dubioza Kollektiv Brand’, from their merch and advertising to their use of social media. During lockdown their online gigs were among the sharpest out there, matching anything the major labels were putting out. 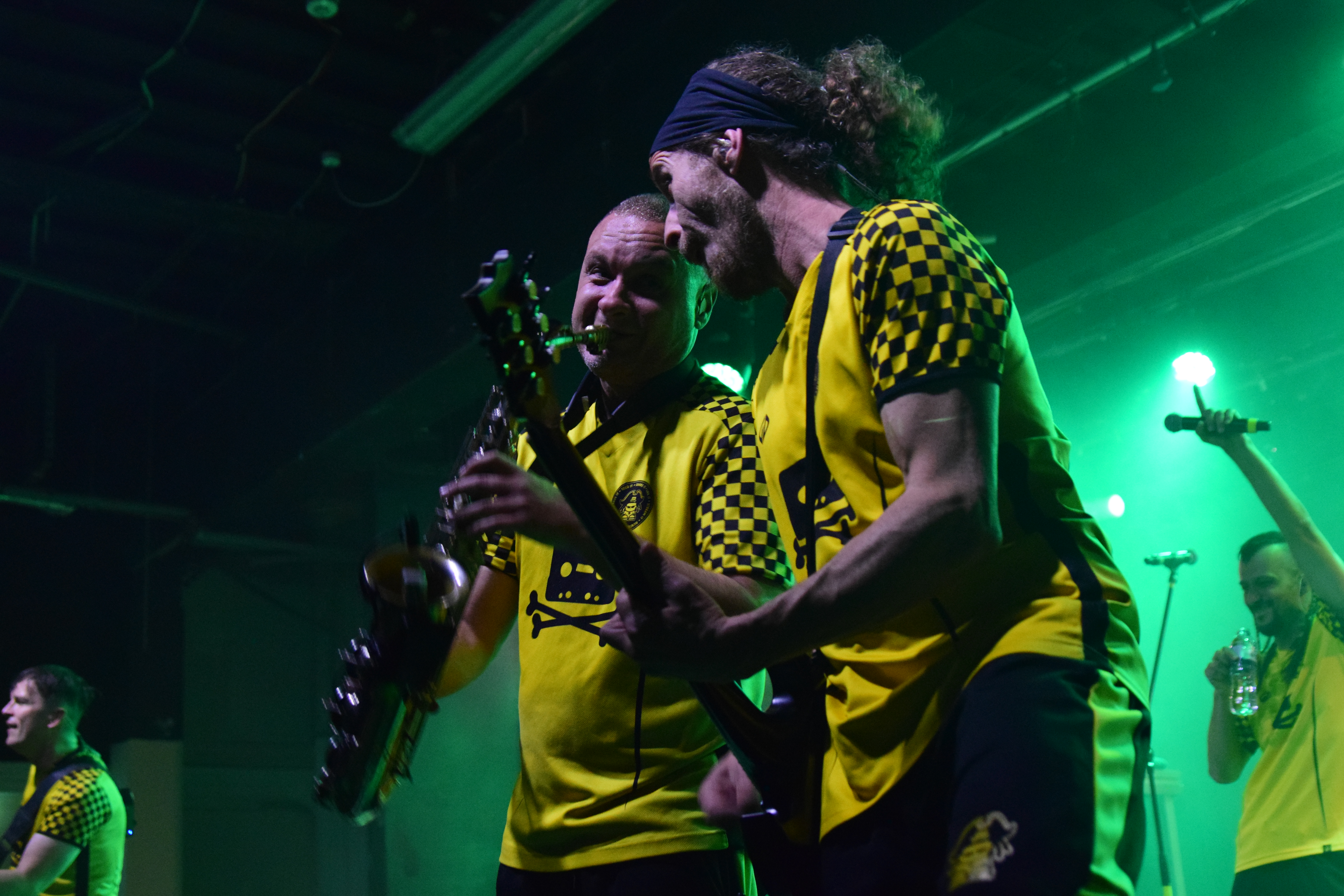 Their shunning of the capitalist music industry is just one example of their rebellious approach.

The group’s activism against “right-wing parties, xenophobia and fascism” is in part based on their home country’s experience with the repercussions of such ideologies.

Dubioza has supported various civic movements and non-governmental organisations (including by advocating them during live performances), having attended and performed at the 2012 Slovenian protests and 2015 Macedonian protests, and supported the Dosta! Roma awareness raising campaign, the Refugees Welcome campaign, a Slovenian environmentalist campaign to preserve the Mura River, and a campaign to revive the Bosnian Dita Tuzla laundry detergent factory wrecked by the Bosnian War and subsequent privatisation. Dubioza also actively advocates for the legalisation of marijuana through their lyrics and during live performances.

Dubioza has dedicated multiple concerts to charitable causes and donated the earnings, including to victims of 2014 Southeast Europe floods in Bosnia, and the children’s Mostar Rock School

Tonight, appropriately, they are playing Trinity in Bristol. As the name might suggest, the centre is based in an old church, originally built in  1829, it began a new life as a community centre in the 1980s.

Trinity’s vision is for everyone to have the opportunity to access and shape arts and culture because we believe art improves individual well-being, empowers communities and enhances society.

Our mission is to empower communities through arts. We do this through providing a diverse programme of arts, heritage and cultural projects, activities and events.

Over the years, I have been to numerous gigs in the venue, and various community events, such as the Bristol Anarchist Bookfair. Bristol, after all, is one of the most radical cities in the UK. It occupies a space similar to where Brighton was in the 1990s, before it started to be gentrified. Bristol is not immune to gentrification, but it still has an edge and can be gnarly on times. It was not by accident that it hit the news worldwide with the toppling of Colston’s statue.

So it is fitting that Dubioza Kolektiv are playing here tonight, one of the most community orientated venues in probably the most right on city in the UK. 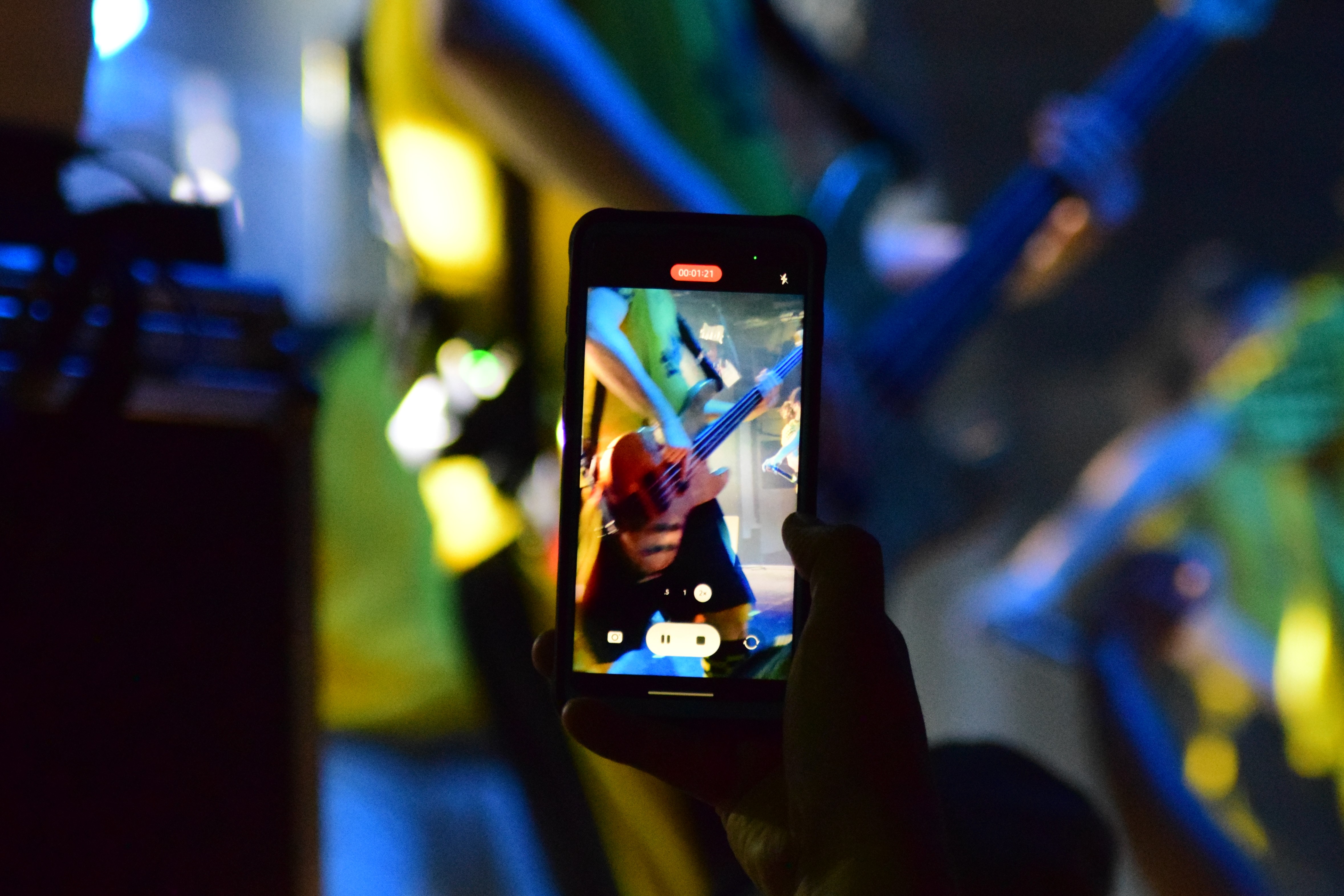 Being militantly independent and having high morals is one thing, but you don’t get to be where Dubioza are without being able to entertain. And boy can the entertain. They hit the stage like a whirlwind, decked out in their trademark Dubioza football strips and immediately engage with the crowd, encouraging them to be part of the show.

They are masters of stagecraft, far more than just a band on stage, but it never feels forced or over rehearsed. They are having as much fun as everyone else and when they hold up signs saying ‘applause’ or ‘make some noise’, their tongues are very firmly placed in their cheeks.

We are treated to a roller coaster of ska, punk, Balkan trad and techno. At times we are skanking and at times we are just raving. We get tunes like, ‘No Escape from the Balkans’, ‘MPFree’ and ‘Cross the Line’. 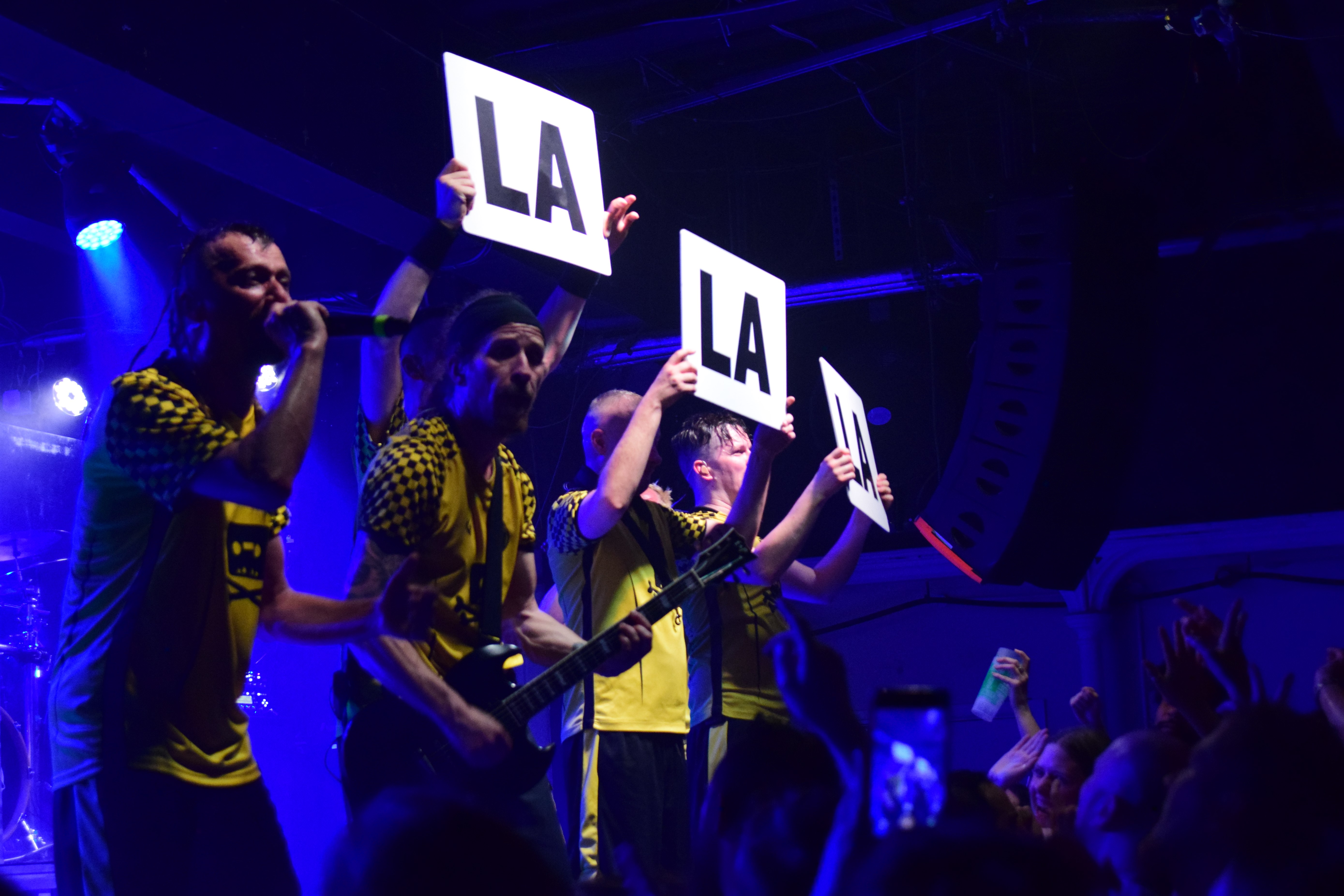 Despite it being a Sunday night, they are scarily energetic. I cant help wonder how they can do this night after night and still be on point every night. And despite it being a Sunday night, the crowd are also mad for it, drinking in every moment. When they are encouraged to sing along by shouting ‘La, la, la’ (as directed by signs held up on stage), they sing along enthusiastically. When encouraged to wave arms from side to side, or grab your neighbour, hug them and bounce up and down, they do just that. Throughout there is a moshpit bubbling away down the front, but when the band demand a circle is cleared for a proper moshpit, the crowd, which should have been exhausted by then, go into overdrive. 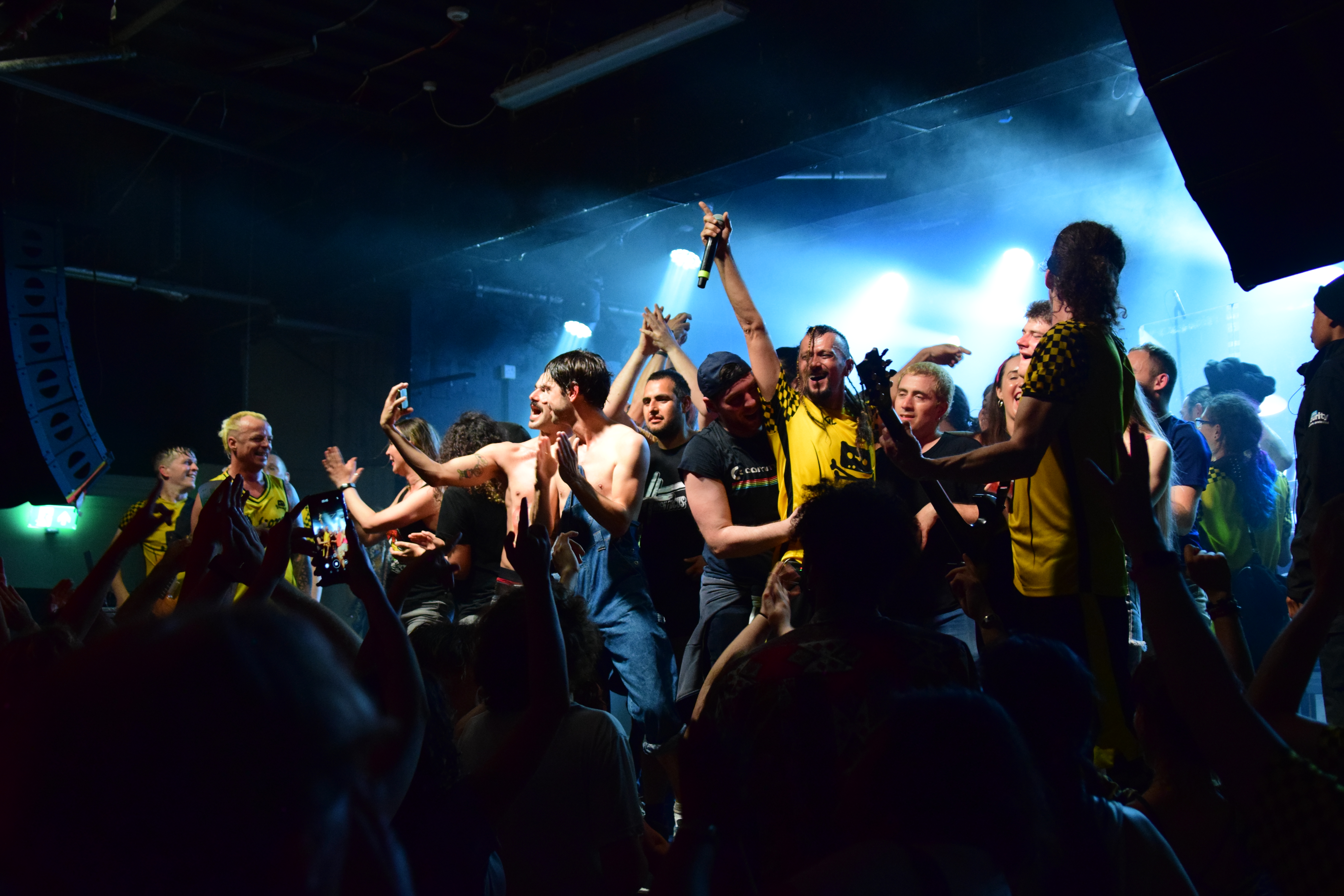 For the second time in three days I find myself using the phrase ‘life affirming’. It’s not a phrase I would want to over use, it would lose its value, but The Lazy Eyes gig on Friday was life affirming and tonight was life affirming. Don’t let anyone tell you there is not any good music around today. What a time to be alive.

The best Sunday in church I have ever experienced. 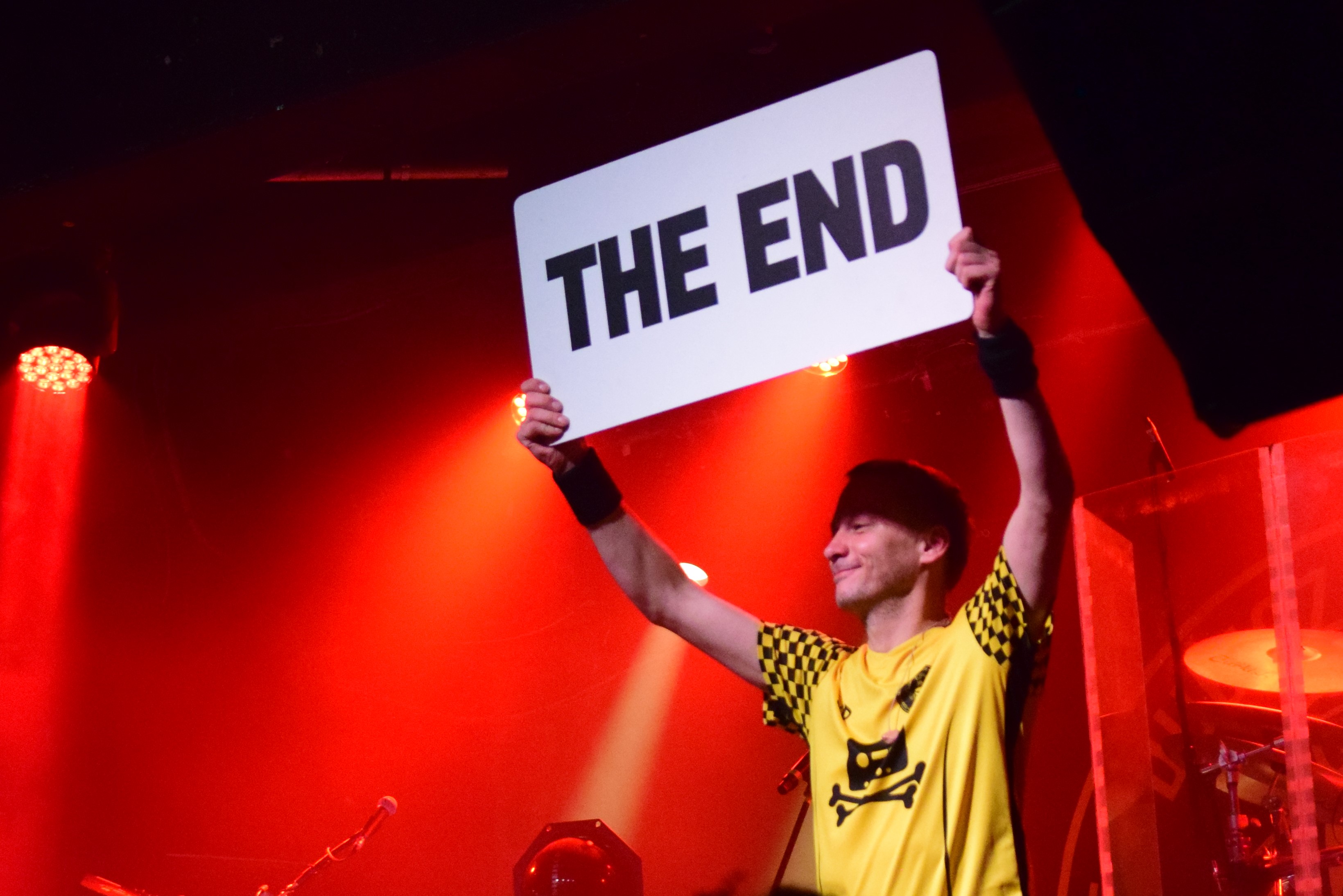