The Lazy Eyes, a gig review, thoughts on the state of music, the cost-of-drinking crisis and other ponderings.

It was a bit of a JFK moment. I can remember exactly where I was when I first heard The Lazy Eyes. I was driving through The Rhondda and they came on the radio. I looked at the screen on the dashboard. The car was telling me it was The Lazy Eyes, but I didn’t want to rely on memory. I pulled over outside the Thai Elephant in Trebanog and Shazaamed it. It was called Fuzz Jam. I sat there absorbing it until the sexy voice of Mary Anne Hobbs confirmed it. A quick internet search revealed it was a track from the, as then, unreleased debut album by this Australian four piece.

I still get a buzz out of listening to older albums. I recently spent an afternoon listening to Tarantism’s entire back catalogue; last month I went to see Nick Mason perform early tunes from Pink Floyd and in July I’m off to see Primal Scream perform Screamadelica. But nothing quite matches the thrill of stumbling upon something new. After more than four decades of collecting music, I still get a massive buzz from a new discovery.

Recent discoveries that have set the pulse racing include King Buffalo and King Weed, although they have both been around for a little while. The Debut EP by Dactyl Terra has been making me smile from ear to ear. And of course, The Lazy Eyes.

I was like a kid waiting for Christmas, anticipating the release of the debut album, Songbook. I was so keen, when if came out I slammed in my order before realising I was paying seventeen fucking quid postage from Australia.

The second thing I did after looking at their discography, was look at tour dates. And lo, they were due to tour the UK. Discovering a new band is a buzz. Catching them live as they emerge is a double buzz. Tickets were hastily snapped up.

TALES OF THE RIVERBANK

With the gig being in London on a Friday night, I would need to take the day off to get to ‘The Smoke’ in time. If I was taking the day off, might as well travel on Thursday night. And so it was, i woke up in London on Friday morning with all day to get to the gig.

The venue was near Borough Market, so by lunch time we arrived at London Bridge station, walked out under the shadow of the Shard and down through one of the oldest food market’s in London. With a market on the site dating back to at least the 12th century. The present buildings were built in the 1850s, and today the market mainly sells specialty foods to the general public. Inevitably, it is quite expensive, but you do get to choose from fare that you will not find in your average supermarket; from exotic fruit and specialty cheeses, through to vegan pies and street food from around the world.

We grab ourselves a couple of pies, before heading up to The Old Thameside pub, right next to the old Golden Hind and snuggled up to the banks of the Thames. We bag ourselves a table on the veranda and ponder the history of one of the most famous rivers in the world, marvel at the science behind some of the huge barges that manage to float and contemplate the constantly evolving skyline.

On the opposite bank, just up from the Tower of London, a number of modern skyscrapers are climbing towards the clouds.  Just a few years ago, ‘The Gurkin’ stood out like a sore thumb. Slowly but surely, it is being hidden by taller, uglier buildings. Apparently, many more are planned.  It will soon look like Manhattan here.

We are joined by an old mate from Blaina, who has lived in Greenwich for the last forty(ish) years. We reflect on the time we went on a boat trip up the Thames,  a launch party for ‘Taxi for Mr Blair’, a single by Sicknote that brought down the ex Prime Minister in 2008.  While the party was warming up, we sat up on top deck with John acting as tour guide for our gang.

Lo and behold, John spies a boat winding it’s way upstream, which he claims was the very boat we partied on. I have no recollection of the name of the boat and mske mental note to check out the video.

We contemplate the price of a pint. The first pint I ever bought was 23p. In the valleys you can still get s pint for £3.80. Today we are paying just shy of £7. It is eye watering,  but I’m getting used to these London prices. I’m actually pleasantly surprised. The view here could easily have put £1 on a pint. I watch the young lads on way home from work, kicking off their weekend and swigging like young lads do. I can’t help but wonder what they do for a living, it’s an expensive hobby,  drinking in London.

We eventually make the short walk down to the gig. The satnav takes us down an alley and we set sight on The Omera. Security are friendly, door staff are friendly and as we walk into the gig room we are immediately in awe. The room has a feel of decaying decadence. Shabby chic I think might be the phrase. Ornate decor, but with peeling paint. Stunning. 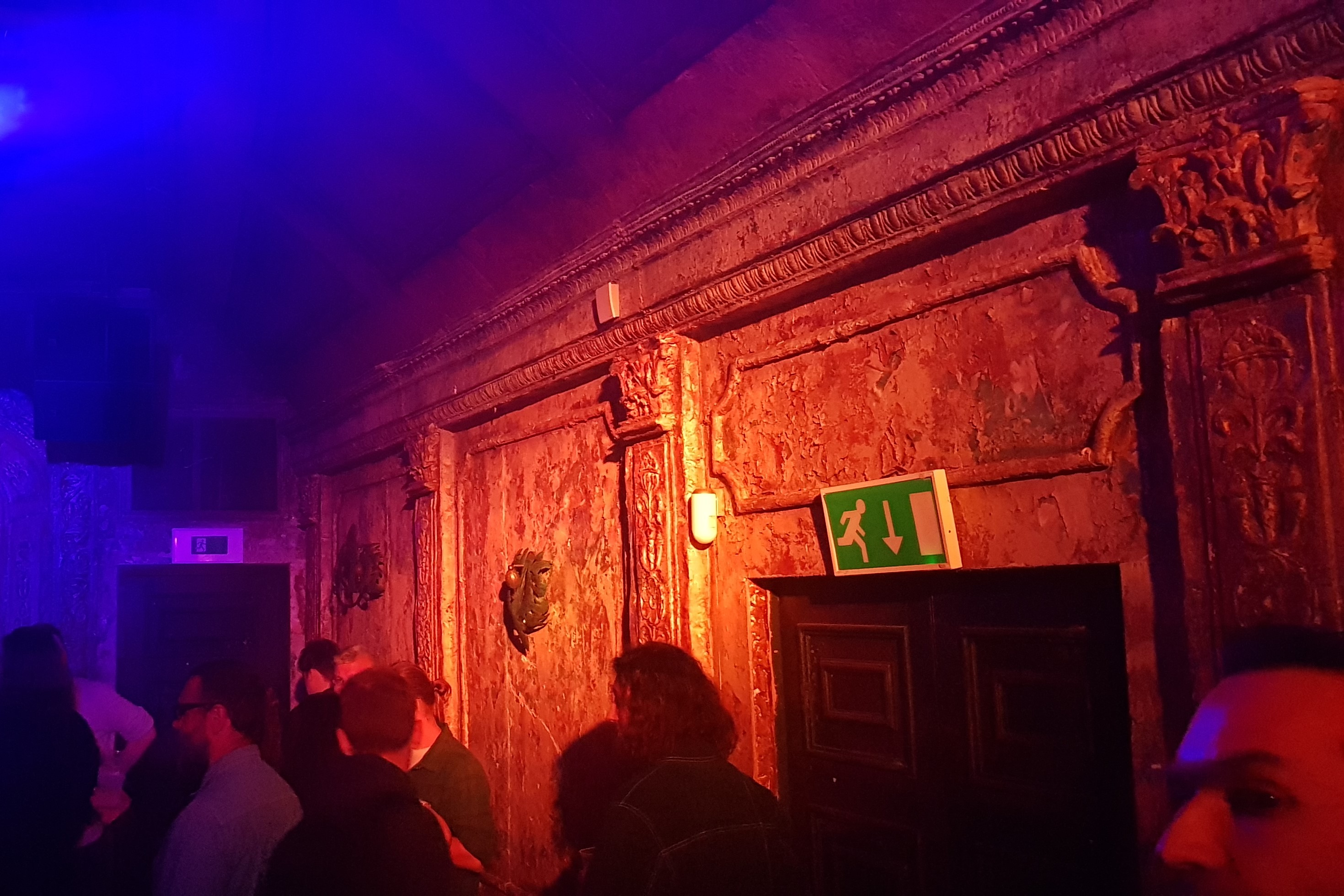 It’s a nice size, about 300 capacity, we have all the makings of a memorable night.

On stage are the support band, Silvertwin. Clearly a very talented bunch. I generally avoid comparisons to other bands, but I’m overwhelmed by thoughts of Squeeze with hints of ELO and Wings. They are very good at what they are doing, very good. But not really my thing.

I’m soaking in the support,  then Gromit presents me with a small (330ml – the size of a can of pop) can of this thing calling itself lime and kiwi cider. That’s not even fucking cider. And that works out almost £12 a pint. I’m seething. And there’s no sign of any taps for a cheaper alternative on draft. I forget about Squeeze and silently seethe.  I resolve to not buy another drink.

Between bands I head to the toilet and spot a huge spacious bar in one of the other rooms. You can actually get a full pint of of draft cider for £5.80. The mist lifts and I calm down. So, pop pickers, my top trip advisor tip, don’t buy a drink in the gig room. There’s a proper bar hidden down by the bogs.

With the mist lifted I get back to admiring the décor and getting ready for The Lazy Eyes. The gig is sold out, but there is still room to move. There is a cracking view and the young, discerning crowd, many of whom had presumably been on s similar journey of discovery as me, are well up for it.

They hit the stage silhouetted by the back lighting, and the crowd go wild. We are elevated slightly, stood on a step, and the energy of the crowd adds to the sight of the band framed by the ornate stage – like an old oil painting coming to life.

Despite having never seen them before, we are familiar with the entire set. Well, they have only released one album after all, and it has been on repeat since the day it was released.

They not only live up to expectations,  they surpass them. By some distance. Their fuzzy psychedelic pop is upbeat and joyous. At times it just makes you want to smile, at times it makes you want to thrash about in ecstatic abandon. The crowd have clearly been rinsing the new album as well, singing along and knowing when to dance. The young band are thrilled to have travelled half way around the world for their first UK gigs and to be welcomed with open arms.

When they go off, I declare to Gromit, “if they come back and do ‘Where’s my brain’, I’m off down the front”. Next thing I know, for the first time in ages, I’m in a mosh pit. An energetic, friendly and polite mosh pit, not in the least hardcore,  but a mosh pit nonetheless.

After the crowd do a round of; ‘Lazy Eyes, lazy,  lazy eyes, na na na na na, lazy eyes, lazy lazy eyes’, to the tune of ‘Baby Give it Up’, by KC and the Sunshine Band, we drift out at a civilised 10:30pm. Presumably a club night will follow.

As we head back to London Bridge we find a nineteenth century pub, The Old Kings Head, down an alley. It’s a proper pub, not a trendy bar, and we get a pint for less than a fiver!

We sit outside reflecting on the night. We feel like we have witnessed something special.  Something historic. We consider that in years to come, when The Lazy Eyes are playing stadiums, we can say we saw them in a back street club in London Bridge.  We have been around long enough to know that the music industry is not based around talent or fairness,  it’s based on money and comercialness. The odds are, they are not going to get the recognition they deserve.  There is not a lot of justice in the music ‘industry’. But hey, whatever the future holds, we have witnessed something very special.  An amazing band play an amazing set, to an incredibly responsive set. All in, despite my moans about beer prices,  a pretty amazing venue.

A day and night we won’t be forgetting in a hurry.