Dub War hit the road for a mini Christmas tour, kicking off in Bristol.

Dub War split in 1999, but have been twitching intermittently since 2015, with occasional gigs here and there and two singles. This three date Christmas tour for Earache records is the busiest they have been in two decades.

The tour kicked off in Bristol, just a short hop from their hometown of Newport. The venue, The Lost Horizon, is a recent addition to the long list of live music venues in the South West’s most happening city. This is our first visit to the venue and we take an instant like to it. On the outskirts of the city centre, just off the bottom end of the M32, it is easy to get to by car and only a short walk from the train station.

Lost Horizon opened in July 2021 and is headed up by the team behind Shangri-La, one of the most popular areas at the legendary Glastonbury Festival. https://www.losthorizonlive.com/about

After the Somerset spectacular was cancelled for the second year running because of the coronavirus pandemic, the Shangri-La team turned their attention to transforming a disused car parts warehouse in St Jude’s into an exciting multi-use space. They are fully webbed up and able to live stream events in real time

The venue has a reduced capacity of 120 inside and 120 in its beer garden, but will grow to a total of 350 when lockdown restrictions are eased.

As soon as we walk through the door we feel that festival vibe, with the colourful décor and the friendly atmosphere.

First up is support artist Cam Cole. As he climbs on stage he looks an odd choice to support the sonic tornado that is Dub War. Just one bloke sitting on a stool with an acoustic guitar. It didn’t take him long to prove the age-old adage, ‘never judge a book by it’s cover’. With a huge bank of effects pedals his beat-up old guitar soon manages to fill the room with his brand of delta blues – and doesn’t sound remotely like an acoustic guitar.

He puts in a good shift and goes down well with the appreciative audience – and we head for the merch stall to buy his two albums.

Between bands the beer garden fills up, people hanging out in the outdoors, adding to the festival vibe of the venue. The band are outside hanging out with everyone, so when they disappear it is obvious the band will be on soon.

Most have filed back into the hall by the time Benji winds up his ever-faithful air raid siren, announcing the arrival of the War (whilst there is a dub element to the band, they are definitely more War than Dub). Like a sonic blitzkrieg, they launch into the set, firing their back catalogue into an audience eager to relive memories of one of the most blistering live acts of the late twentieth century. 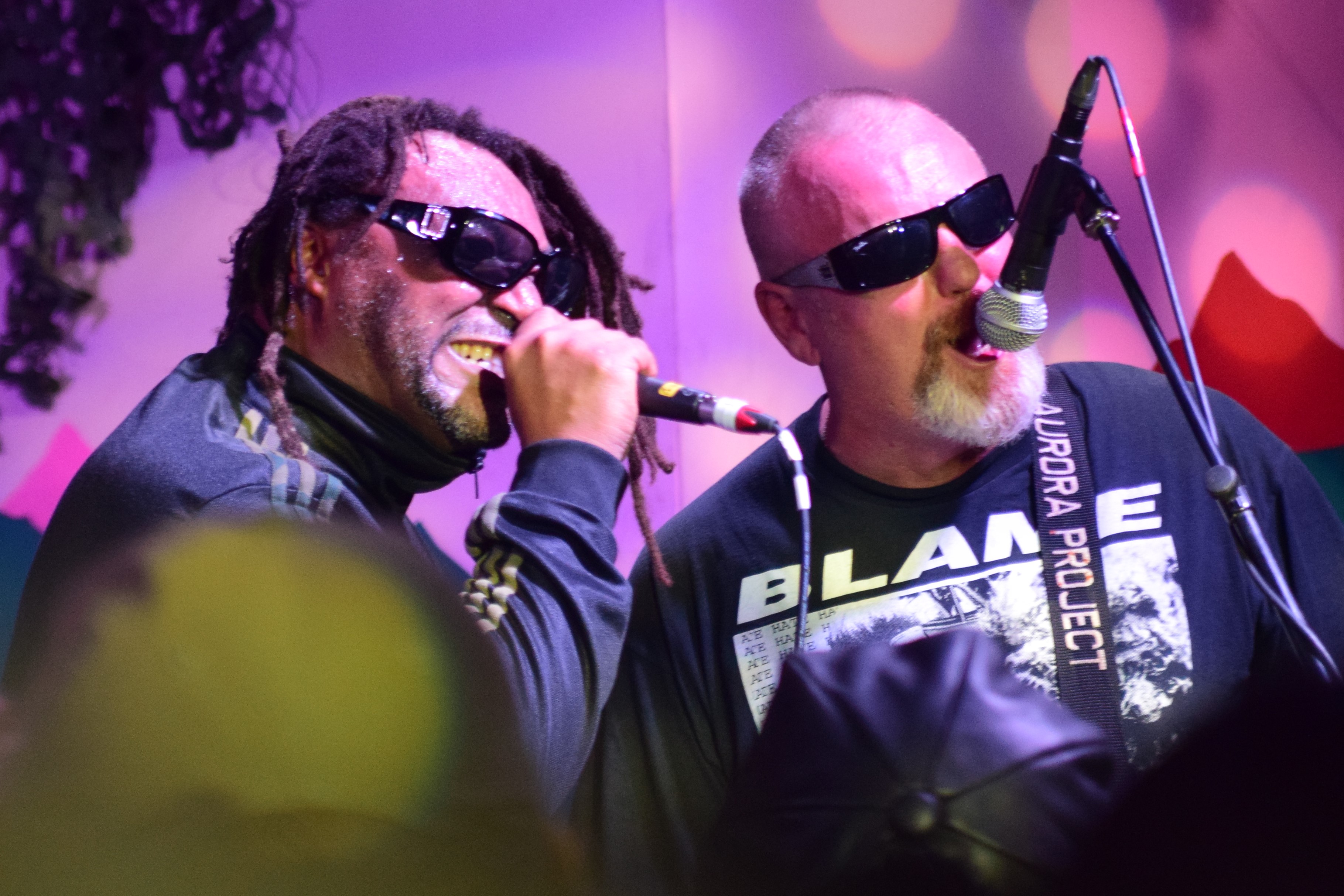 From their early releases on the Word Of Warning label, such as Psycho System and Nar Say A Ting, to the later Earache releases of Strike it and Enemy Maker, they rip into them as if they hadn’t been away.

New boy Mike Gregory beats out a precise rhythm at the back whilst Richard Glover does his bass thing casually stood there in his wrap around shades making it look easy. Geoff Rose seems to have a smile from ear to ear, from start to finish. He’s an axe hero but without any arrogance – when he holds his guitar up to the audience, he’s not showing off, he’s having fun with his mates. 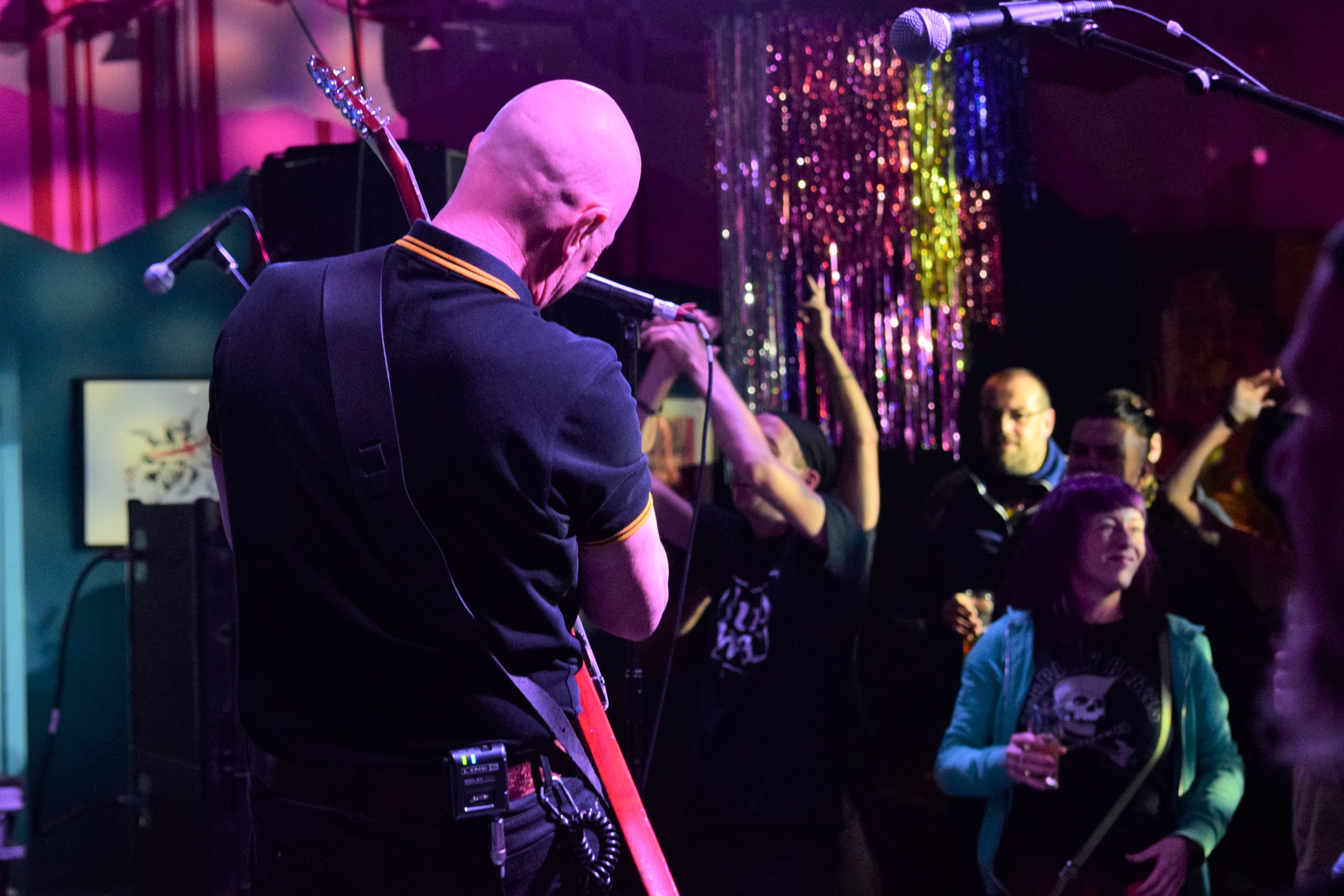 Benji is the consummate frontman. His unfeasibly versatile vocals seem to turn up everywhere these days, from his own band Skindread, though guesting with artists like The Dubioza Kollektive, to the one off charity single with Dean Beddis, the punk version of Ebony and Ivory. When singing he adds energy and passion to intense Dub War sound, but between songs the intensity disappears and he brings his own unique brand of Newport humour into play as he playfully engages with the audience.

And a Dub War gig is all about engagement. They are, after all, just a bunch of guys from the ’Port that love music. They have all gone off and done other things for the last twenty years, they are doing this because they love it – and (tonight at least) half the crowd is made up by their mates. The line between band and audience is blurred, which is how it should be. 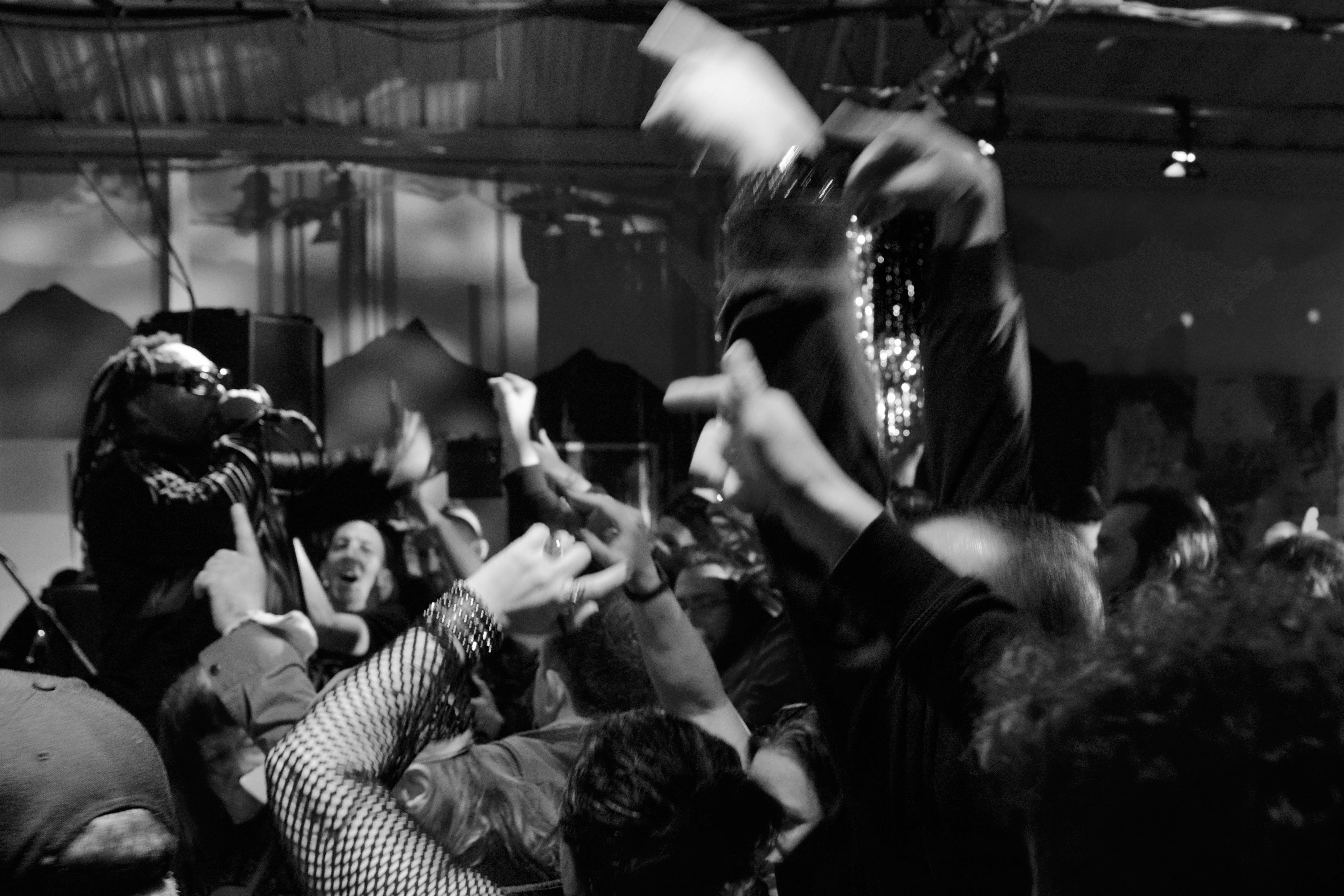 When introducing the 2016 single Fun Done, Benji announces they have just signed a new record contract (with an album Westgate Under Fire due out next year). Presumably this means we won’t have to wait so long for more gigs – and next time there will be more new music in the set. Bring on the War.