Got into a chat about possibly the most famous gig ever to have taken place in Aberdare this week, so I thought I would use this as an excuse to blog about my memories of that infamous gig.

It was a benefit for the National Union of Mineworkers, who were at the time a few months into the soon to become historic year long strike against pit closures. The headline band was the legendary Crass.

It was to be a gig that would go down in punk folklore. Indeed it was a night I would never forget, but not for the reasons you might imagine.

I went up with my mate Mike, who just happened to be a striking miner, all be it from a different valley, and his lady at the time, Sandra. Sandra drove.

We arrived nice and early because there were several bands on the bill we wanted to see – Flux of Pink Indians and Annie Anxiety. Tickets were a snip at two quid and the doors opened at 6pm. 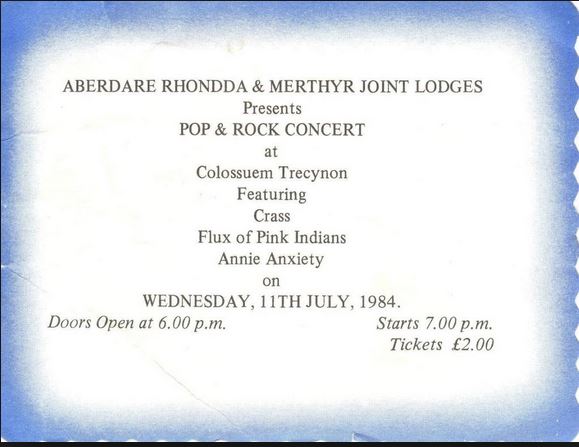 We handed over our treasured tickets and looked around the Colosseum.

“There is no bar”, replied the NUM dude on the door doing his impression of a masonry toilet.

Mike and I exchanged glances, no words were needed. Pub. We wanted to see Annie Anxiety, but with a drink in our hands. So if that was not possible, a retreat to the nearest hostelry was in order.

We figured that Crass and the Flux would do the maximum of an hour set each, so calculating backwards from the time all civilised gigs end, 11pm, if we got back to the gig by 9pm we would catch the main event.

Of course this calculation was based on the fact that the hundreds of gigs we had previously been to were all in venues with a bar, and those days stop tap was 11pm – so 11pm was when the gig would finish.

But this venue did not have a bar. Our calculations for when the gig would finish were therefore based on a false assumption.

“What do you mean the gig is over?” Says a genuinely disbelieving Mike when we arrived at our pre-planned 9pm.

“I mean it’s fucking over, what did you think I meant?” asks the genuinely disbelieving brick shit house.

We then go through a conversation that started off with a demand that the band comes back on, quickly downgraded to a demand for money to be returned, then a bizarre debate about it being a gig for striking miners and Mike pointing out that he was a striking miner. I think he wanted more than just his two quid back.

It has to be said about Mike, he was not scared of anyone and more often than not, he did not need to be. There were occasions though when, actually, perhaps he should have been scared. This was one such occasion. He wasn’t though. Luckily for him I am a lover not a fighter and managed to calm the situation down and we headed back home, light of the two quid ticket money – this was 1984, you could get pissed on two quid back then. But unlike all the punks that had gone to the gig, we were lubricated. Compensation of sorts.

We returned to Blackwood the same united unit that had left a few short hours previously. Unlike Crass. They split up in the van in the way home. Karma is a bitch.

A few weeks later I spotted the aforementioned man mountain that had been on the door that night knocking out a police horse with one punch on a picket line. Mike was lucky to have a lover like me as a friend.