Up bright and early again ready for one last day of tourism mania.

The gang was a little divided today.  I dont like using real names, so I will assign code names to protect the guilty.

The Little Bears were up early thinking they were fresh, but soon realised they were still pissed and by the time we were due to head out, hangovers had kicked in.

The Favourite Bears were just on a different wave length, as usual, and not responding to messages. Bloody vegans.

Mother Bear was out for the count. Her claims that she would be up and about early, made at 4am, were predictably hollow. She was away with the fairies tucked up in her nice, but small bedroom.

The Goldilocks gang (us) were well rested having had a deep sleep in the huge bedroom sneakily nicked from Mother Bear on arrival.

So we agreed to just do our own things.

We turn right out of the hotel towards the old town, but do a side step Mervyn Davies would have been proud of, swerving around the roaming packs of feral walking tours, and head up the hill totowards the castle.

Although it leads to one of the main attractions of the city, the hill is remarkably free of tourists.  Or indeed people in general. They must all be on a walking tour.

We pass several bohemian arty places and stop at Multium, a mirror gallery where you can experience infinity. We paused for a moment and decided to take a look. We couldn’t really see ourselves just walking past. 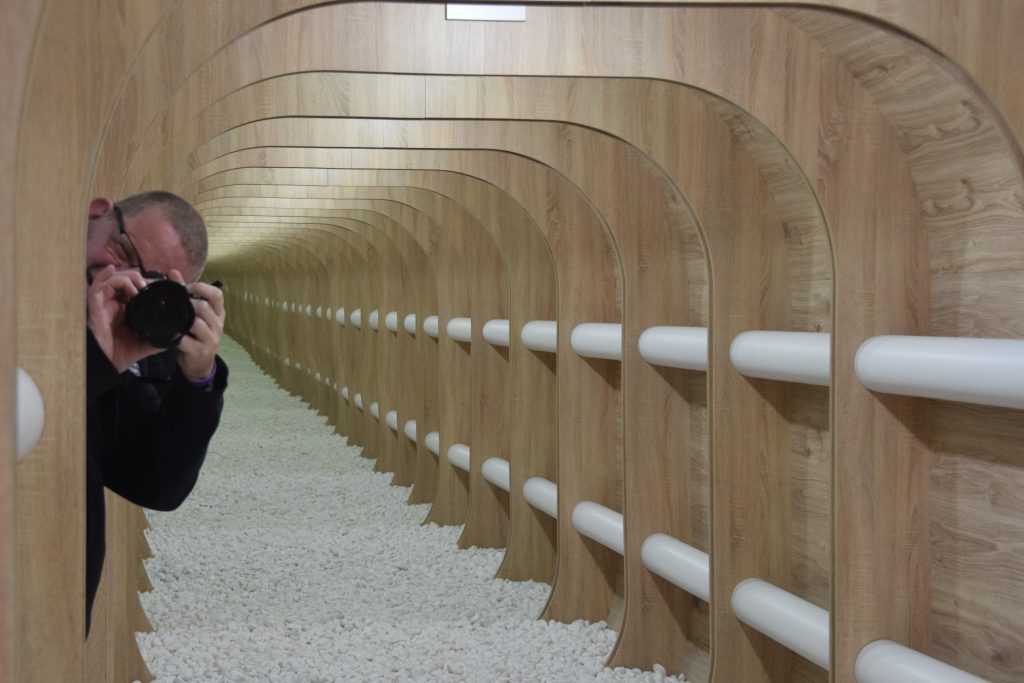 A reflective half an hour was spent looking down infinite holes, along infinite corridors – even longer than the longest corridor in the world in Beijing  (see China blog) and gazing into the Matrix.

A hidden gem I thoroughly recommend to anyone visiting the hood.

Onwards and upwards, quite literally,  we proceeded to the castle.

Built in….. actually, Google it yourself, I’m not going to pretend I know – this is not Lonely Planet you know.

What I do know is that you get a none too shabby view of the whole city from castle. The old town, the new town, the bridges over the Danube and, obviously The Danube. (It would be difficult to see the bridges over it if the river itself wasn’t there.) 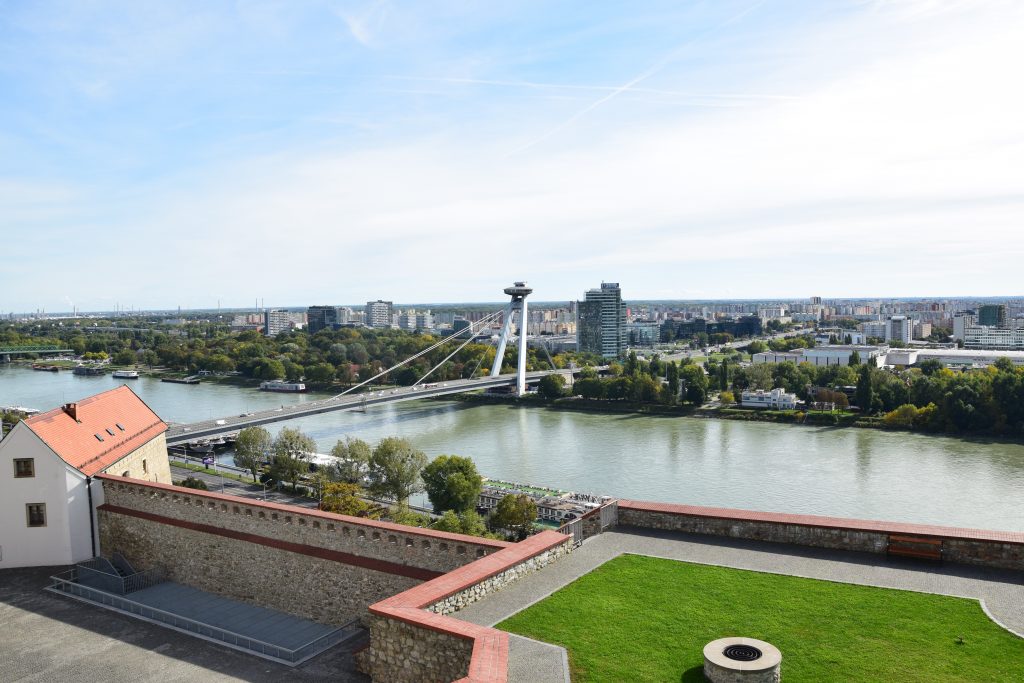 The Danube,  clocking in at 1,777 miles long is the second longest in Europe. It travels through ten different countries, more than any other river in the word.

Wandering around the  castle we spot many culture vultures sporting Wales shirts and bucket hats. Clearly the Red Wall does exist outside of Irish pubs

After a good wander and lots of photos we head for the bar.

There is s nice little restaurant in the castle that has an open air dining space overlooking the old town. We order cocktails and food. 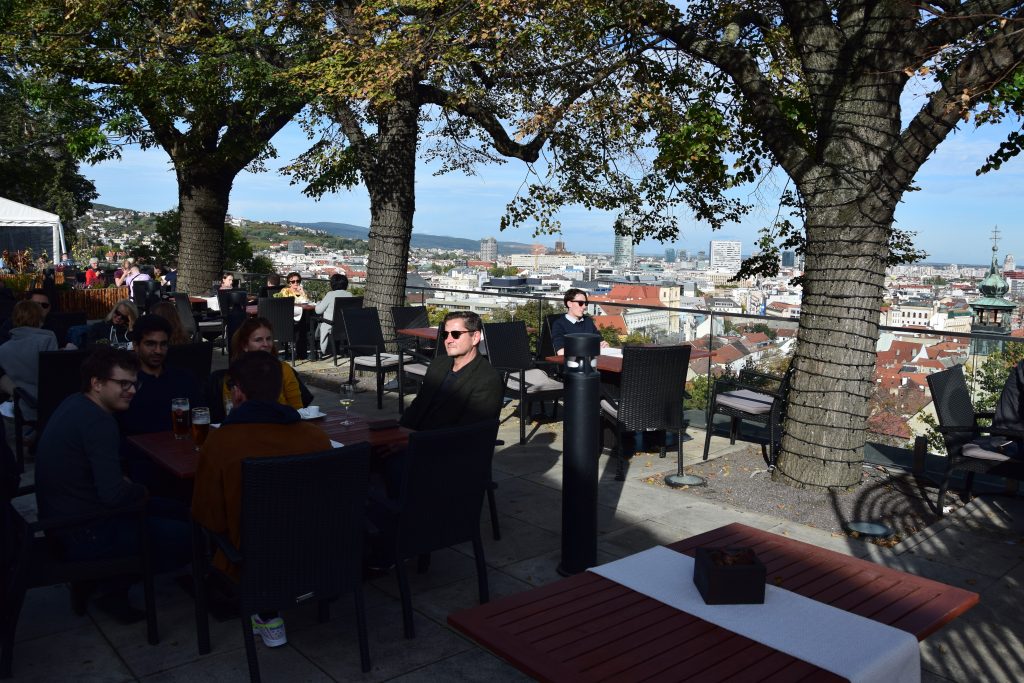 Again, the food is ace. It turns out that potato pies stuffed with sour cabbage are very similar to ravioli. They taste sublime. However, these dudes could do with a good talking to about portion control. After a pleasant hour taking in the scenery and savouring the taste of the food we carried on with our journey, still hungry and twenty euros lighter.

Next port of call was the much talked about UFO bar. A flying saucer shaped restaurant perched on top of the tower of the cantilever bridge that spans the aforementioned Danube.

On the very top of the tower is an open air viewing platform that provides even better views of the city than the castle. It’s 95m height has several advantages over the castle, including the fact that you can see the castle, as opposed to being in the castle. 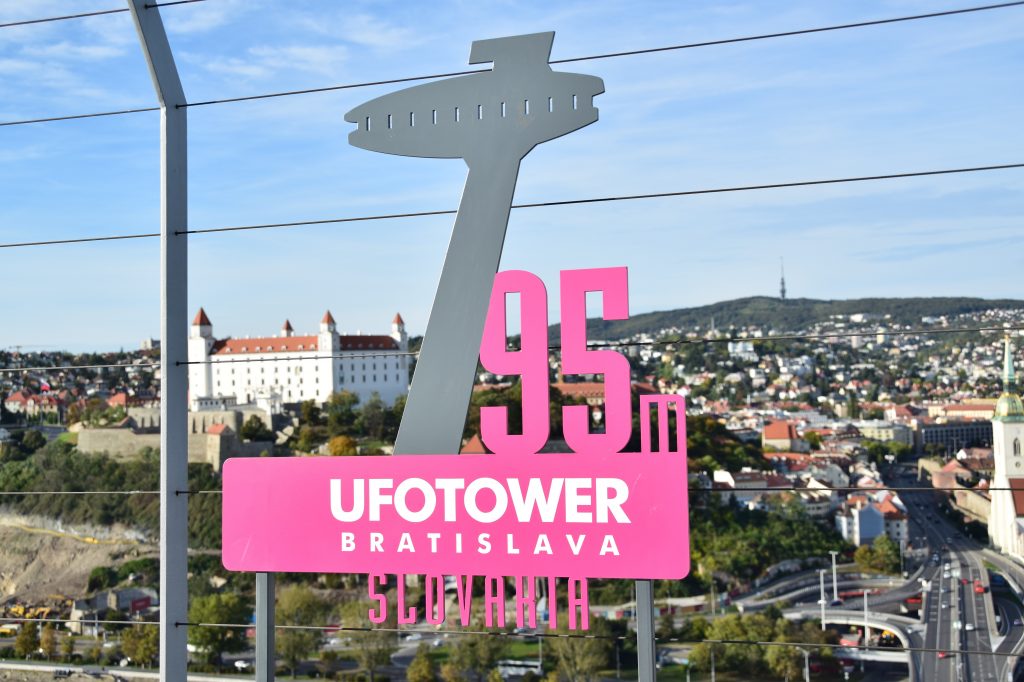 Looking up the Danube it is remarkable how one side of the river suddenly transforms from city to forest and mountains. 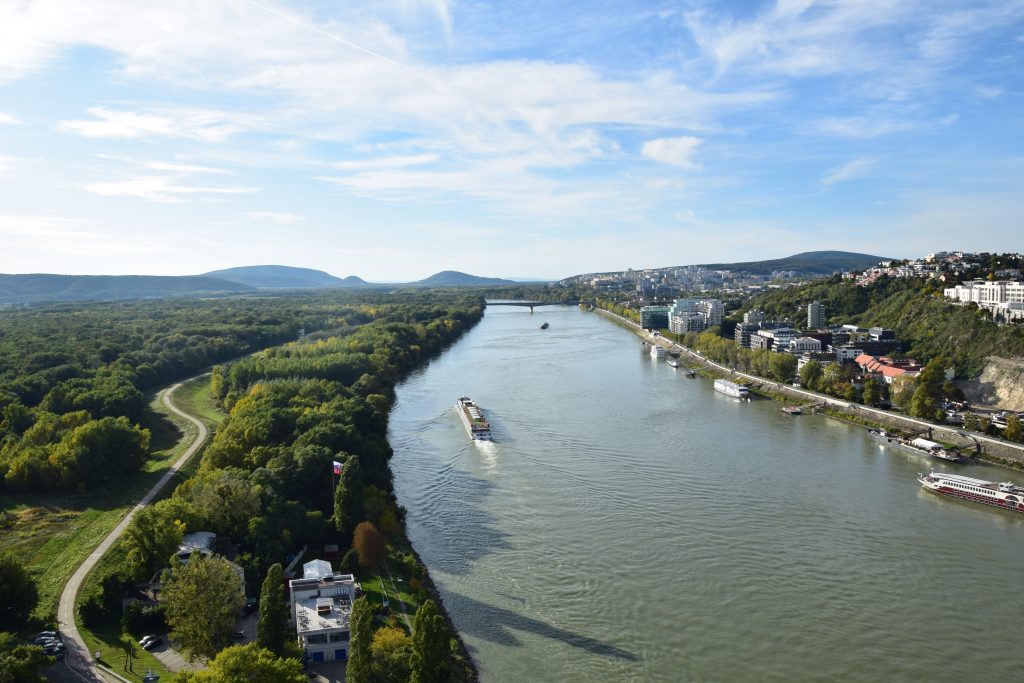 In the distance we can see the smoke stacks of some dirty industrial activity, but scanning along the horizon you then spot hundreds of wind turbines as far as the eye can see, although these are actually in Austria.

One thing we had noticed that much of Slovakia is thoughroghly modern and much of it is eco friendly. From electric cars and solar panels on public benches do you can charge your phone, to waterless urinals. All new buildings are ultra modern and many take the environment into consideration.

My (un checked) theory is that modernisation stood still during the Soviet years, so following the Velvet Revolution a programme of redevelopment kicked in just as the world was starting to think about sustainability.

Whilst we are on the subject of toilets, unlike China, where you have to squat over a hole, or France, where huge pubs are serviced by a single toilet, Bratislavan pubs and restaurants are well catered for in the toilet department.  The UFO has a particularly amazing toilet. A thoroughly modern affair,  with the urinals resembling hipster buckets and users can relive themselves whilst observing a panoramic view over the city. I’m not sure how anyone with vertigo would cope though. Shitting themselves would not be a good option as there is also a panoramic view from trap one. 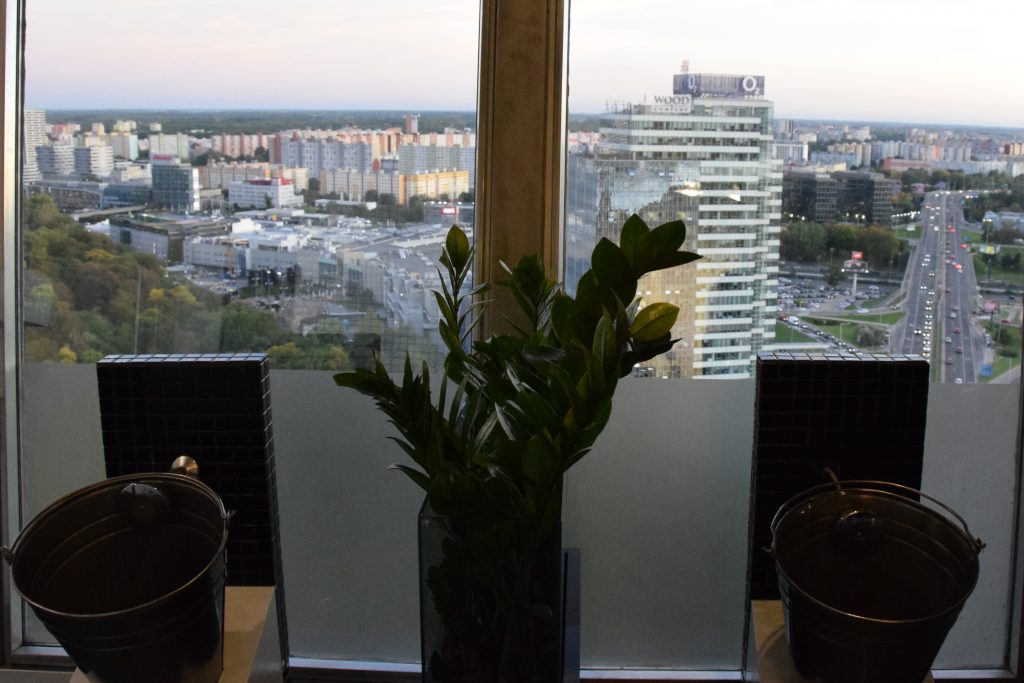 The bar is full of Welsh culture vultures admiring the scenery although the ambience takes a dive when the lift opens and the sound of “it’s just a shit Eiffel Tower” rings around the cafe. 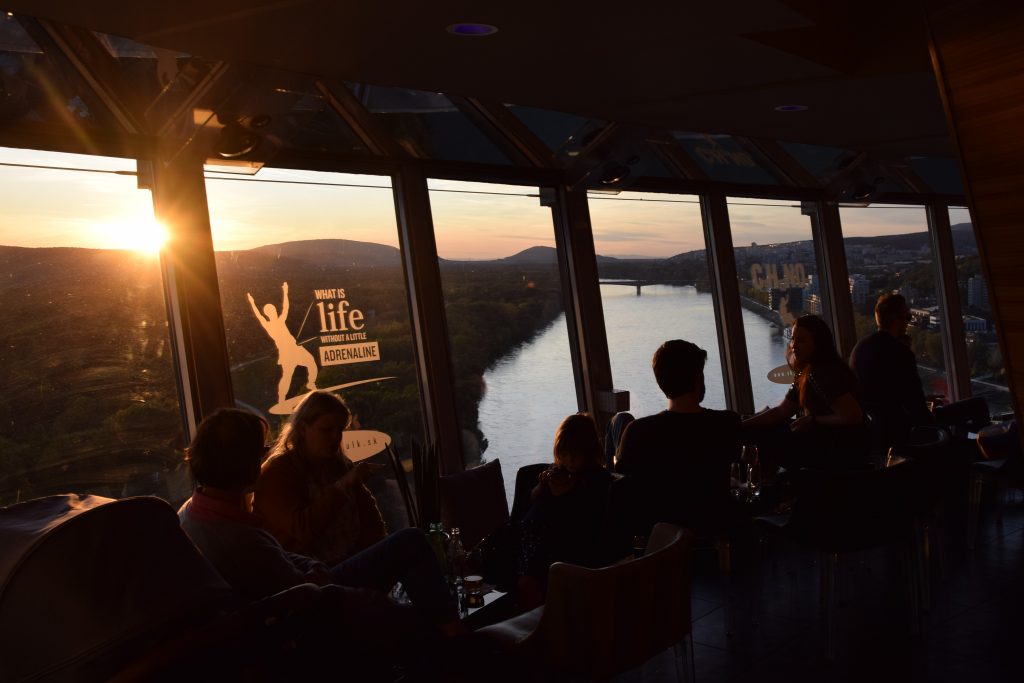 We head back up to the viewing platform to catch the sun going down then stroll back through the town to the apartment.

On the way we stop for a vegan burger. When we find out that it will take fifteen minutes we decide to have a swift pint whilst waiting. Just three weeks ago we were in China where finding a pub was like trying to find the source of the Nile. Now we are in a city where just about everywhere sells beer, including burger bars. Shame the beer is so shit.

After a very quick siesta, we head out to find Fuga, a live music venue that is a step up from the karaoke or covers band pubs.

The sat nav takes us in circles for ten minutes before we realise we had walked passed it twice. The entry is a very small door, but on entering we descend into an arched cellar with a bar running along the side and a stage at the far end.

It is an intimate little venue, with a capacity of probably less than two hundred. From the posters on the wall and the Antifa stickers in the toilet I’m guessing this is Bratislava’s answer to Newport’s Le Pub or Cardiff’s Clwb Ifor Bach.

There is a second room up a few steps and a busy smoking area/beer garden.

Before leaving home I had done some quick research on Slovskian music and found Genuine Jacks, a tasty local band that just happened to be playing Brataslava during our trip – in Fuga. 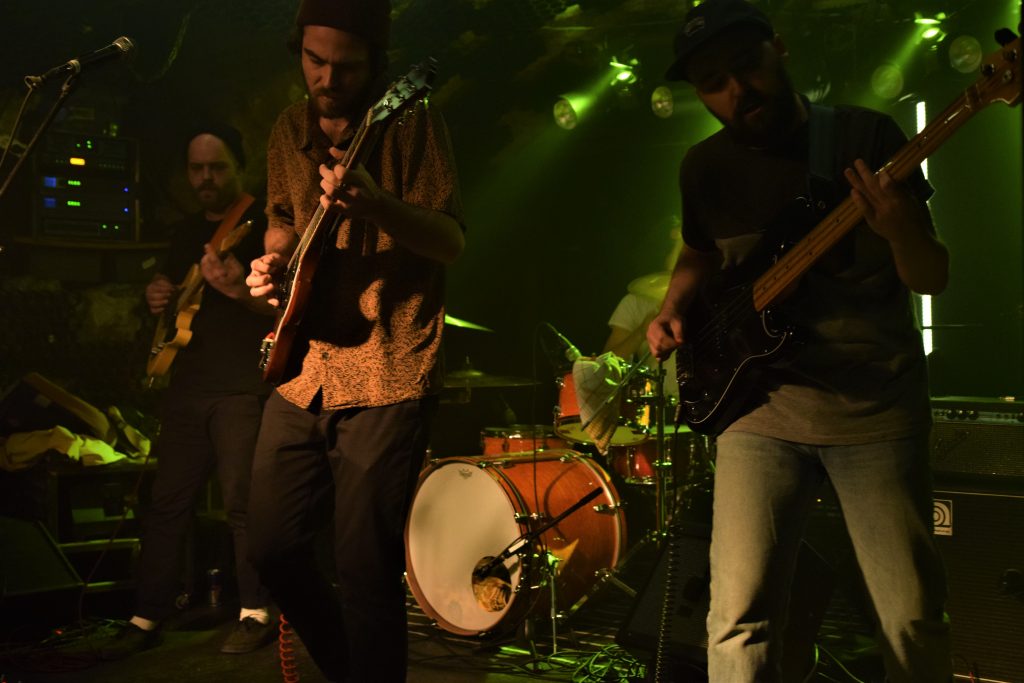 Initially it looked as if no one had turned up for the gig but as soon as they hit the stage the second room and beer garden emptied, pouring into the gig room.

I had enjoyed the stuff I had discovered but live they were even better. High energy sixties psychedelic mod punk. Although they have English lyrics, the chat between songs is Slovakian, so I have no idea what they are talking about.

Not the case with the next band though, Darjeeling.  Being German they dont speak Slovak either so they opt to communicate with the audience in English. Luckily we also speak English.

They dabble with the psychedelic edges of progress rock, with a bit of kraut rock thrown in for good measure.

At the end of their set we head for the KGB Pub, a theme pub with the walls adorned with pictures of Soviet leaders and presumably the Secret Police – although as they were a secret organisation at the time, I dont recognise any of them. 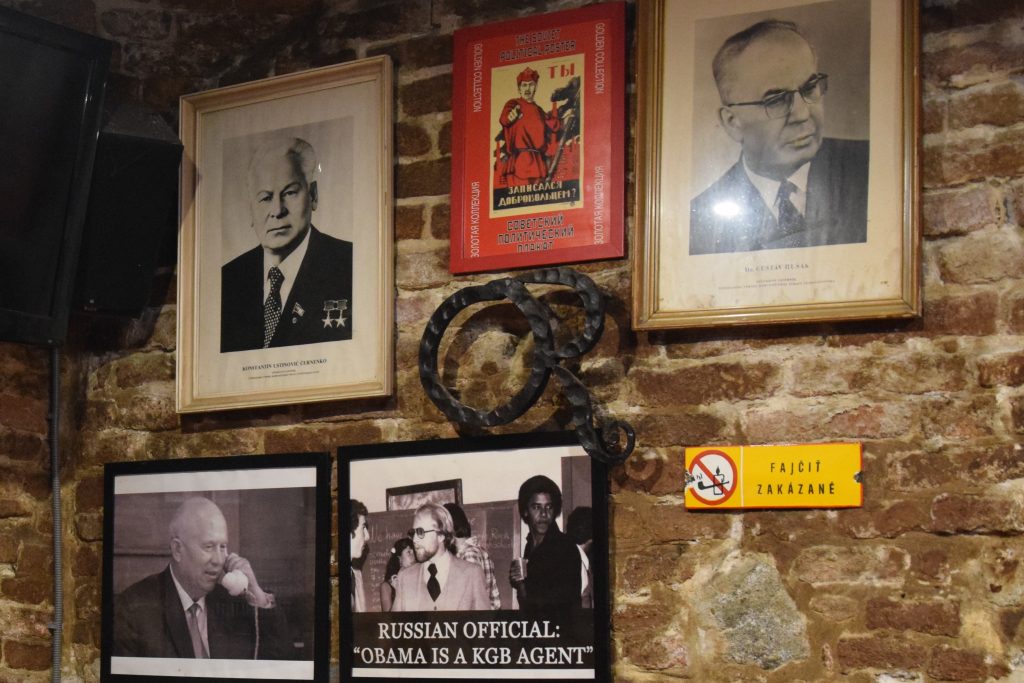 When in Rome and all that, so we opt for vodka instead of the local beer, which is starting to get boring now.

After admiring pictures of the Red Army for an hour or so we head out into the night and bump into a dozen or so of the youth wing of the Red Wall (see what I did there?).

Boisterous songs are chanted to ensure the entire street knows they are there. Including the local gendarmes.

We stop off for a slice of broccoli pizza and head back towards the cider in our apartment.

Once we resume our journey we note that the street is silent. A few of the aforementioned yoof are having a polite chat with with the forces of law and order.

Then comes quote of the night. A Cefn Fforest yoof quietly approaches us and says, “watch out Clint, the old bill are pulling welsh fans, so keep the noise down”. The friendly warning is appreciated, but aimed in the wrong direction me thinx.

As we return to the apartment block Favourite Son is heading out in search of vegan falafels in the early hours. Life on the mild side eh!

So endeth our last full day in Bratislava.