Basically Johnny Moped is the story of Johnny Moped, one of those legendary haphazard bands that burned brightly but briefly around the time punk was being born. 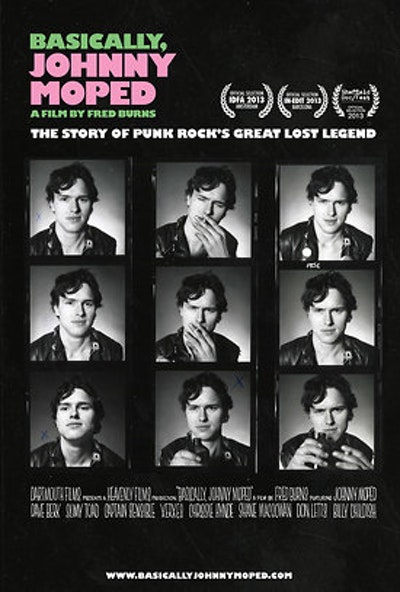 Johnny Moped are one of those bands that are way more famous than they should be. Their brief but chaotic early existence is the stuff of punk rock folk lore. They were a pivotal ingredient of that firmament that was the birth of punk rock, 1975 to 78.

Based in Croydon, early line ups included Captain Sensible and Chrissie Hynde. They were hated by all the other bands in the town because they were seen as talentless no hopers. They, however, were prefect for what was about to come. Punk rock.

This film, made by Fred Burns, son of Captain Sensible, has some amazingly rare footage of the band playing in gardens, in the back of vans and at the legendary Roxy club. Some of the footage coming from punk rock’s very own Don Letts.

As well as surviving members of the band, we also get to see interviews with some of those that were around at the time, including Shane McGowan, and Wild Billy Childish. It is suggested that if Hynde had not been sacked from the band she would never have gone on to fame and fortune with the Pretenders.

It is amazing the band ever got to do anything. Johnny Moped himself was reluctant to gig or go into recording studios, mainly because his mother in law did not want him wasting his time. On several occasions he was actually kidnapped by the band to go in and do some overdubs for the album ‘Cycledelic’.

There were also issues with the talented bass player who felt frustrated with the band so dived into the bottle and was often too drunk to perform. This eventually led to tragedy which is touched on in the film.

Although the band was fronted by Johnny Moped, his name was more than a little ironic. He actually fancied himself as a bit of a biker – to the extent that he had a Hells Angels tattoo. When this came to the attention of the actual Hells Angels, via the picture on the cover of the album, another tragedy is only narrowly averted, partly through the intervention of Lemmy.

They manged to get themselves together enough to put out an album and a handful of singles and featured on the legendary ‘Live at the Roxy’ punk album. Barney Bubbles did all the artwork and even made crude very early videos. With hindsight they looked like they were constantly on the verge of making it big but the various components of the band were too volatile and implosion was inevitable.

Whilst Hynde and Sensible went on to fame and glory, most of the band slipped into obscurity and the nine to five drudge that most of us take for granted.  However, their place in history meant a reunion was always a possibility, and the band has been revived a handful of times since then. The most recent revival was in 2011, around the time of this film. There was even a new album in 2016, ‘Real Cool Baby’.

The dysfunctional nature of the band means they will never be filling stadiums, but perhaps their quirky idiosyncratic nature is perhaps what make them such a treasure. Long may they be one of rock’s greatest failures.