The Alabama Three are probably most famous for the theme tune to cult US TV show ‘The Sopranos’, but anyone who has ventured out away from the TV and been to a festival in the last few years will know that they go way beyond that four minute slice of acid blues genius.

Despite the name, there are 8 of them and they aint from Alabama. Although loosely based in Brixton, front man Larry Love, AKA Rob Spragg, is a Merthyr Tydfil lad, so he feels perfectly at home when we meet up in a Newport pub just before their show in the Newport City live Arena.

(NB – this interview took place back in 2005, so some of what was said is out of date and needs to be read in that context).

Despite the ‘fame’, Larry Love still pops up in Wales on a regular basis, often DJing with his Alabama 3 Sound System. Many of those gigs have been with long time Iguana heroes Captian Paranoid and the Delusions and Larry is not too much of a star to sleep on the Captians floor. How long is it since he left the land of song? “I left about 20 years ago, I come from a family of Mormons so I am the only one that has rejected the way of the lord. I met the devil one night down at the crossroads, up in Blaina, I sold my soul and that was it, rock ‘n roll here we go”.

He still likes to keep in touch with his Welsh soul though, “When I was 14 I used to be on the Grange Town end watching Cardiff City, I don’t really go much now, I am too stoned, but I love wearing that T-shirt ‘Soul Crew- Terrifying the English Since 1982’. ”

The Alabama Three sounds more like a trio of guys locked up in some dirty Deep South penitentiary for a crime they did not commit, than eight guys from Brixton. “Yeah, you’re right”, Larry tells us in his deep south drawl, “I knew about the Alabama Two, here were two black guys that were wrongfully convicted of raping a white woman in the thirties, then ya got ya Birmingham Six and Guilford Four. Add to that the fact that I am a Welsh man and I do not like union jacks, or wankers with union jacks shaking hands with Tony Blair, so rather than play America under the Brit pop banner and talk with a Welsh accent we pretend we are from Alabama just to fuck everyone off”.

It seems to have stuck, even sat here in a South Wales pub the red neck accent rarely slips. “I mean part of it was I wanted to mix some of my own stuff and I came across a sampler, an Akai S1100, which is you’re standard sampler, and I thought with all my rhythm and blues and gospel records I could sample them and do my own version of Americana.” 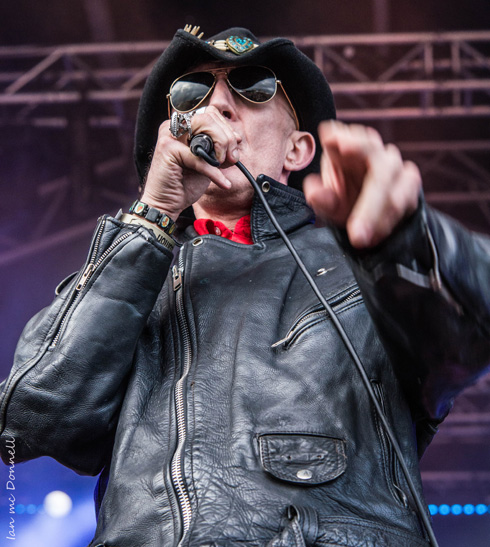 It does not quite transfer to America though. “There’s a bunch of shit kickers over there called Alabama, but they have copyrighted the name, so you cant wipe your arse on a piece of bog paper called Alabama without paying them money, so we can’t use Alabama Three over there, we have to call ourselves A3.”

With the massive success of the Sopranos, there can be few in the English speaking TV watching world that have not at some point heard ‘Woke Up This Morning’, even if they do not know who recorded it. Some bands would milk this, some would find it a millstone around their neck, The Alabama Three take it in their stride. “Well, we were having trouble getting marketed because we were getting accused on the radio of being drug dealers and all sorts. But the Sopranos was one of the best TV programmes to come out of America for years, so people aint so scared of us now”.

“It is ironic that the theme tune is by a band that is only pretending to be from Alabama, with a singer from Merthyr Tydfil. We have also been on the Simpson’s, now the Simpson’s and the Sopranos are the two best examples of American families I can think of, it’s nice to be associated with both of them”.

With five cult smash albums under their belts, not to mention compilations and live albums, they do not rest on their laurels. They have built a massive reputation on the festival and club circuit that is due entirely to the depth and quality of their catalogue and live performances. The Sopranos is just a footnote in the Alabama Three story.

Yet despite the cult status that goes back before dipping their toes in the pond that is US TV fame, they have stayed true to their underground roots, releasing records on ‘One Little Indian’ records. “We were with Sony for a bit and they just did not have a clue how to market us because we are a sort of cult underground thing. With One Little Indian we have a lot of freedom to do what we want, and I would rather be with a label that allows us to fuck up and forgives us. With a major label if you fuck up they drop you, so it has given us time to develop things and we appreciate that. Mind you, I still wouldn’t mind a stretched limousine with four bunny girls in the back, but there you go, I am sat in a pub with half a shandy but never mind”. 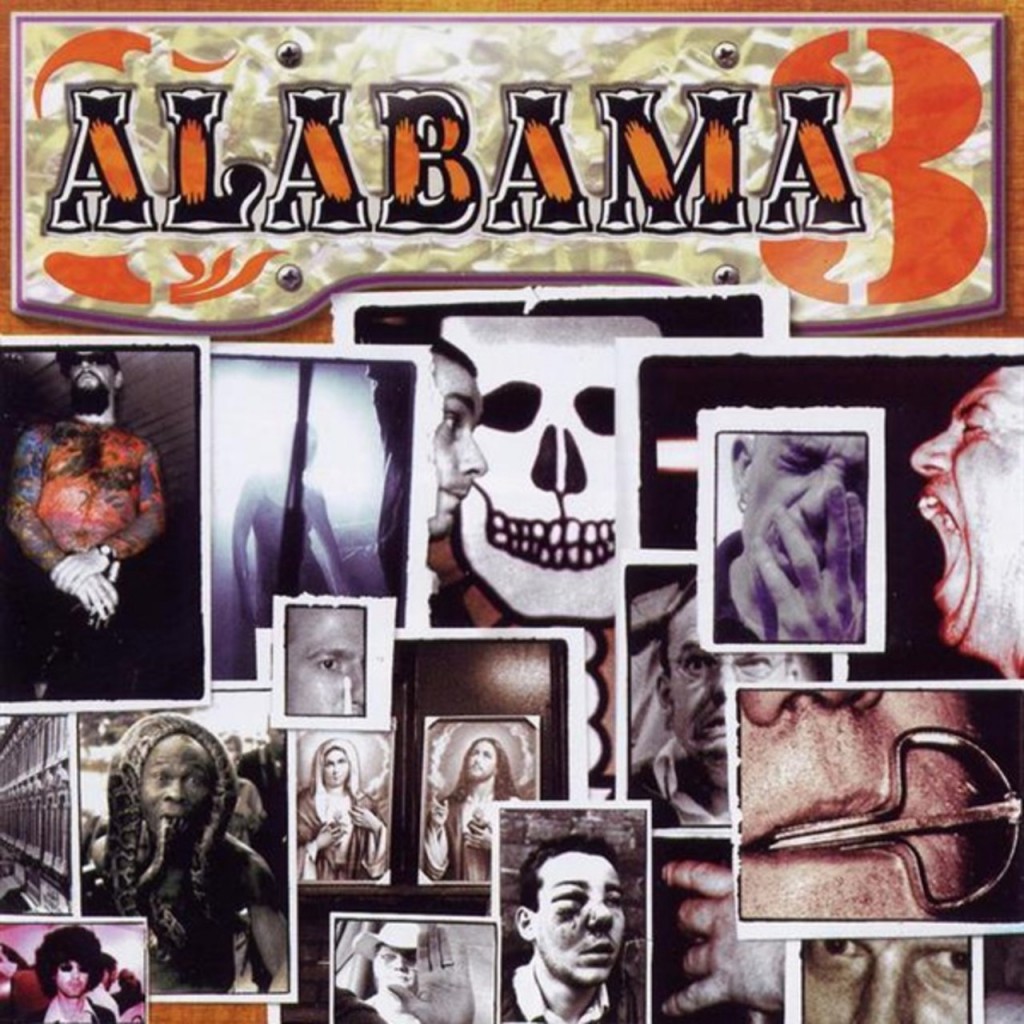 The debut album, 1997’s ‘Exile On Coldharbour Lane’, was a cult hit long before TV fame came their way. Since then things have gone from strength to strength, but 2005’s ‘Outlaw’ has been critically acclaimed as the best release yet. Larry is happy with it. “Well most bands do a concept album for their ‘difficult third album’. With us being perverts we bucked that trend and did a concept album for the first album, that was our ‘Sergeant Pepper’ and the albums after that were deconstructed I suppose, one was heavy dub, then we went techno, then all country. This one I suppose is full circle, an amalgamation of the country and the blues with a bit of techno. I am very pleased with it, it’s a very shiny record”. Far be it for us here at Peppermint Iguana to disagree with ‘The Critics’ (who ever they might be), we happen to think the album is something of a classic.

The album features a track ‘Have You Seen Bruce Richards Reynolds’, a tribute to the mastermind behind the ‘Great Train Robbery’ way back in 1963, which features a guest appearance by Bruce himself. This is not the first time they have hung out with ex-guests of Her Majesty. Paddy Hill of the Birmingham Six features on ‘The Thrills Have Gone’ off the ‘La Peste’ album, after meeting Larry back stage at a party organised by Irvine Welsh. These are not the only outlaws in the Alabama Three gang. “The famous Howard Marks, Paddy Hill, Bruce Reynolds, half the hells angels in the country,” Larry tries to rattle off a roll call of some of the infamous names that have served time in the Alabama Three. “The next album will be called ‘The Librarian’, about falling in love with a nice quiet girl”, he chuckles to himself, even laughing in an American accent. “Bob Dylan said ‘to live outside the law you must be honest’ and sorry Mr Blair but we are here to stir things up, musicians have always had that role, we get away with murder, with songs you have a little bit of leeway to say things others might not get away with and I like to think we do. I would hate to be Chris Martin (Cold Play), naming your kid Apple and worrying about EMI shares slumping 70% cos they haven’t delivered a fucking album. At the same time instead of making trade fair EMI are selling arms to Indonesia to blow up little kids”. 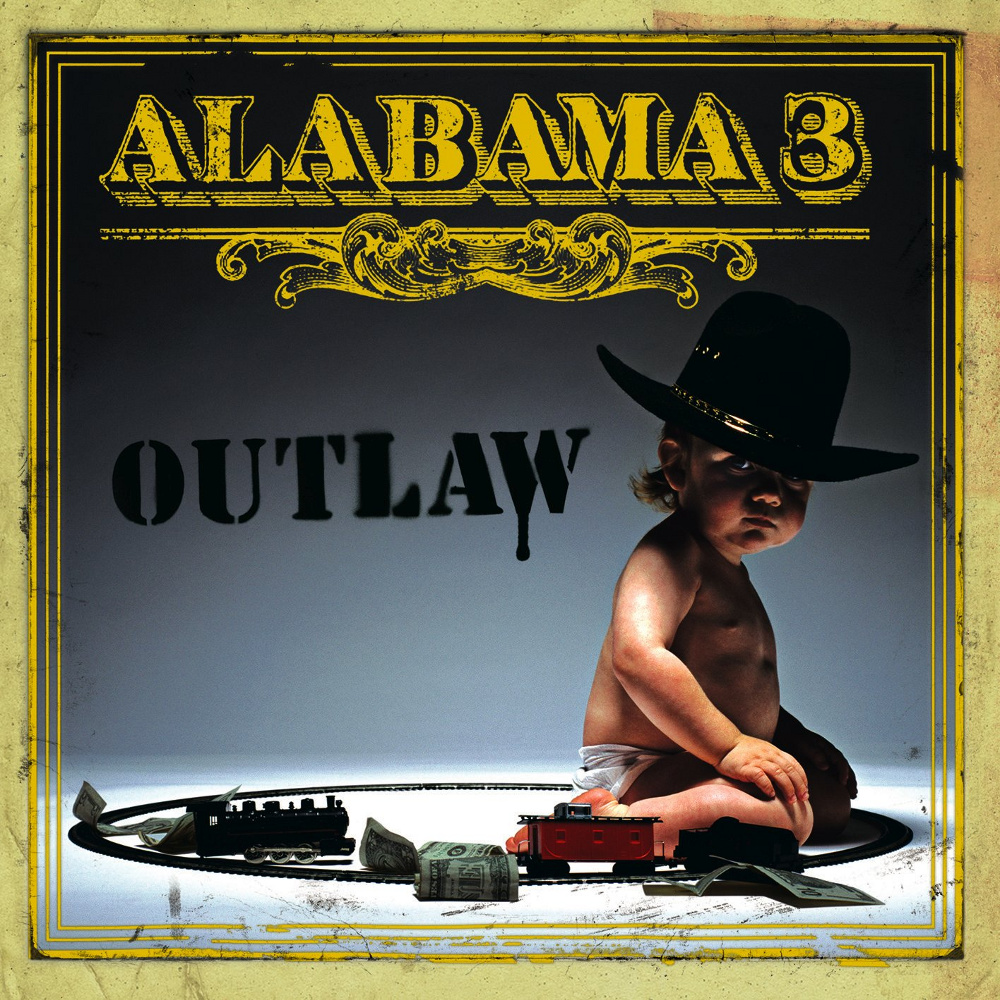 Resistance and rebellion are one thing, but there is a fine line to be drawn between working class heroes and villains. “There is a certain amount of valid criticism of us for glamorising so called violent people”, Larry accepts, “but one thing I know about Bruce Reynolds, who has not been involved in criminal activity for many years, is that he is old skool, a gentleman, he is a really intelligent man and me and him really got on. The reason he robbed the Brighton train was because after all the war years and poverty; he had been brought up with movies with cowboys robbing trains and he thought to himself ‘that’s never been done in this country’, so he read up on all the Jessie James stories and it was executed like a military operation. So yeah, he was a real outlaw, but he has a certain dignity about him. With all the fucking liars in our government, who are the fucking criminals?”

Clearly The Alabama Three have an underlying political edge, from the subtle, and sometime not so subtle lyrics, to appearing at events like the pro-cannabis event ‘J-Day’ and anti death penalty gigs. “We are political but the main job of a Saturday night band is to get the ladies arses moving left to right and the gangsters at the back feeling alright, all night. In the process of getting the ladies to move their arses if you can mention things like ‘do you remember the miners strike’ and remind people, you can have a political conscience without being like these posturing pop stars who just make themselves look a bit wank”.

“I would rather ask questions and let people find the answers themselves, than preach to them as if I have all the answers. We respect the audience”. Sounds fair enough to us! 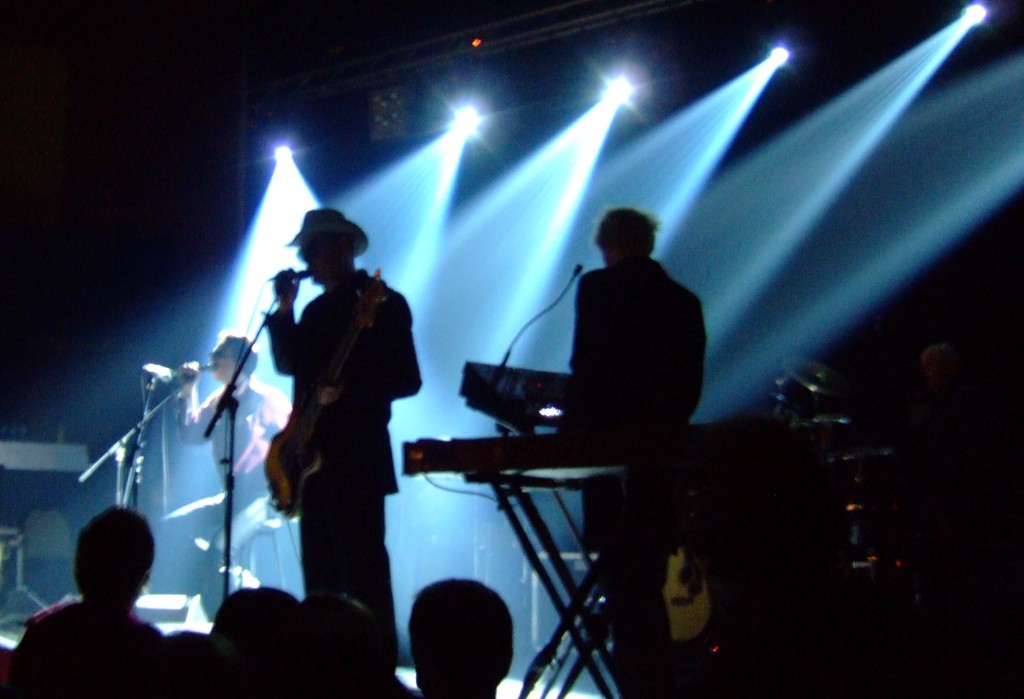 Acoustic sets, full band sets, sound system sets, pubs, night clubs, little festivals, big festivals… the Alabama Three are likely to turn up anywhere doing anything. If you aint seen them over the last few years, you aint been out of the house. “I like festivals” Larry tells us, “cos you can do the show then go raving for three days around the site. When we do a gig we have the after party, but it’s not the same. It’s a different discipline, with a festival you have to get in quick and give the crowd what they want, where as with your own tour you can do it the way you want, you can be sat in a pub before talking to mad Welsh women”. 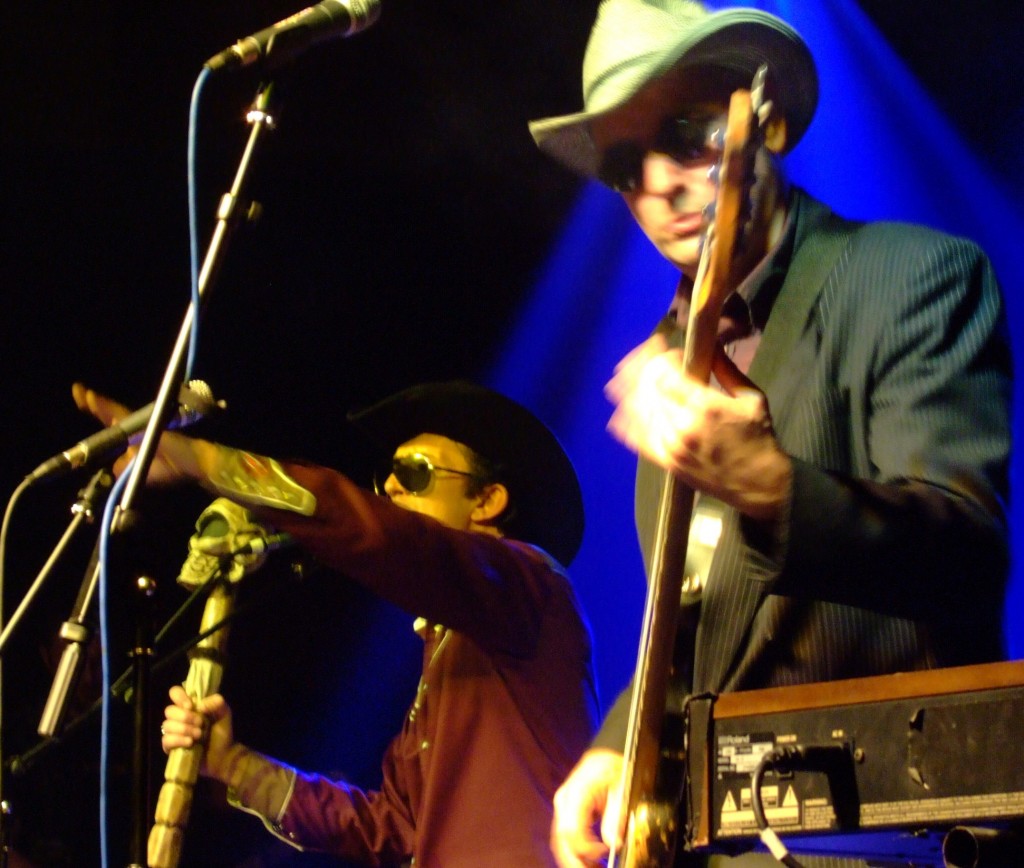