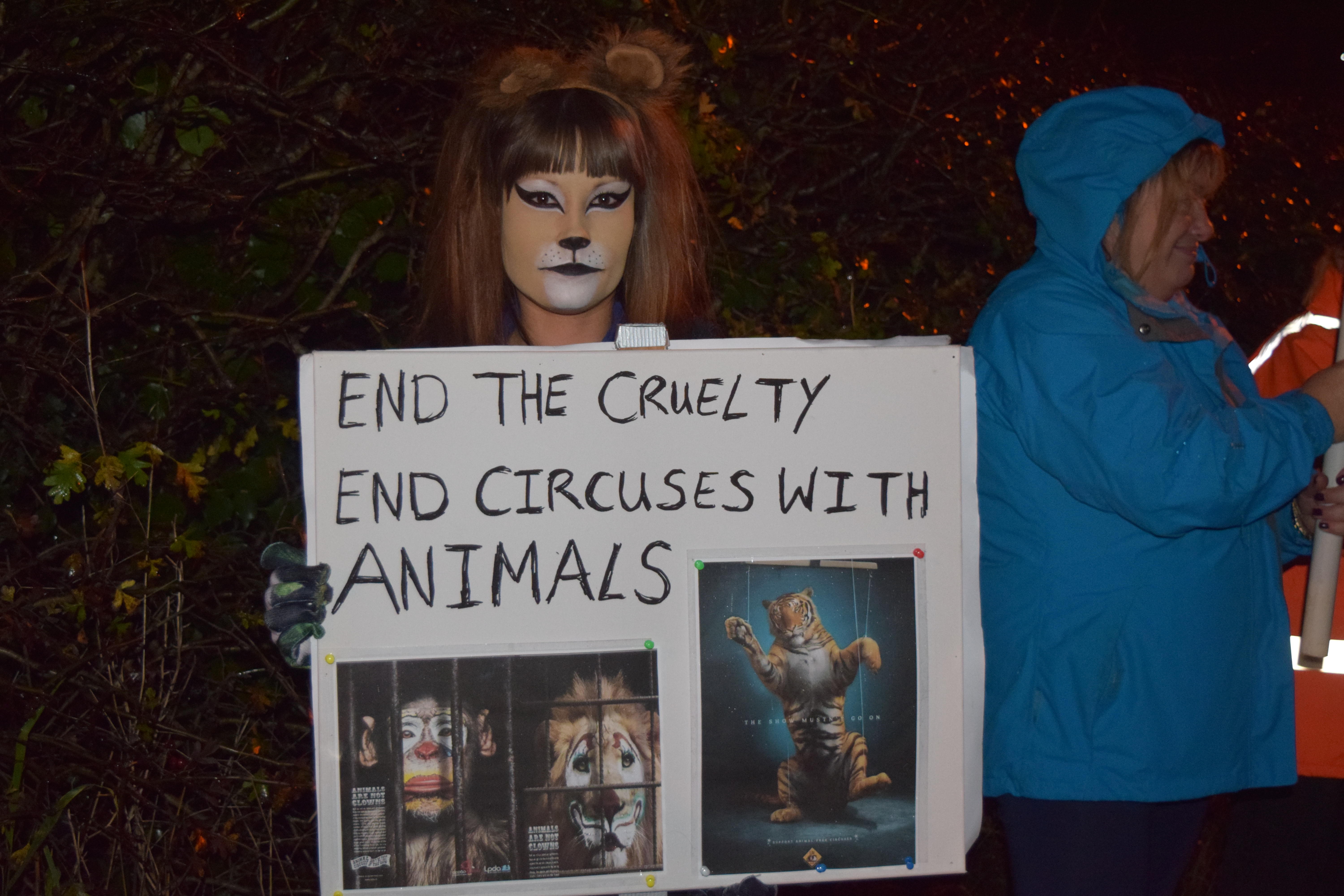 Tyr-y-berth has been revolting this week, as protestors have gathered every night to say ‘down with this sort of thing’, outside a travelling show put on by the UKs last Lion Tamer.

The once famous Chipperfield Circus, regulars on prime time 1970s Saturday night TV, appear to have fragmented. Thomas Chipperfiled now splits his time between running ‘An Evening with Lions and Tigers’ and defending himself in the media.

The show cannot tour England at the moment, because the cages in which he keeps the animals have been declared too small by DEFRA. As a result, he has resorted to touring Wales, where the legislation is slightly different. The aim of the tour appears to be to raise money to increase the size of the animals ‘enclosures’.

An enclosure sounds nice, but what they actually mean is ‘cage’. If you read between the lines, they seem to be accepting themselves that their cages are currently too small. (We have not touched on whether they should be in these cages in the first place).

Much of their web presence seems to be dominated by defending themselves from accusations of cruelty, and having a pop at animal rights activists, which speaks volumes about what they do.

They claim to be educational and entertaining, although in reality there is nothing educational or entertaining about this show. The show is totally unnecessary and undefendable. No matter how much those involved tell us they love their animals (which they do at every opportunity), you can show love without making the one you love do tricks in front of a paying audience.

The show claims that it educates people in two ways; “The first is conservation and habitat loss of these animals”. How on earth getting lions and tigers to perform parlour games like jump through hoops or leap from stool to stool educates anyone about conservation is totally beyond us.

“The second is education about how the animals are kept, trained and transported in travelling shows”. This is bordering on surreal. They appear to be exploiting these animals so they can educate people about how animals are exploited. Don’t forget, this is the only show travelling with lions and tigers in the UK.

The owners of the show keep telling us that if these animals are not part of the circus they would have to be released into the wild and would not survive. We are not experts on how well they would survive in the wild, but we are pretty sure there are many more intelligent options for these animals. It is not a black and white case of either release them into the wild or let them carry on being exploited by a circus.

The show has been dogged by protests everywhere they go. In some places protestors have managed to shut them down. The protests in Tyr-y-berth, near Bargoed, in the heart of the Rhumney Valley, South Wales, have been good natured, well attended and peaceful. On most nights the protestors have outnumbered the punters.

The majority of cars that drove past were beeping in support of the protest. One lady took the time to drive up to the nearest supermarket and come back with crisps, chocolate and drinks for the protestors. Another lady called in with a banner made by her little son, who is too young to attend the protest but was keen to show support.

The protestors have ranged from young teens to the retired. On the whole the people protesting have been locals that have never been on any kind of protest before. Protestors made a point of not challenging people going in, the last thing they wanted was to upset any children. But that has not stopped the Chipperfileds branding the protestors as ‘extremists’, even though the only aggression has come from the Chipperfields themselves.

The protest has been an example of how social media can be used for good. The whole campaign has been pretty much organised through Facebook, which it turns out is not just for pictures of your dinner.

Hopefully this will not be necessary in the future though, as it looks like a motion will be going through the National Assembly for Wales shortly, which will ban the use of wild animals in the entertainment industry. Watch this space.