The Skapa Collective has today released their Wales Euro 2020 anthem, in association with Show Racism the Red Card.

Yes, folks, it is that time of year. The airwaves will soon be filled with the sound of football anthems, both official and unofficial. Euro 2020 kicks off in a few weeks (all be it a year late) and The Skapa Collective, with their Wales tune, have set the benchmark high. 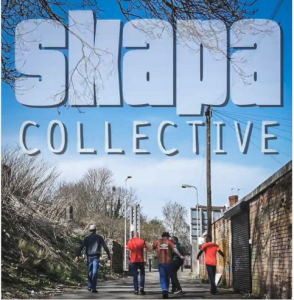 The Skapa Collective are an eleven-piece ska band from South Wales. For this release they have drafted in Ducky and Roddy from the original SHARP band The Oppressed, Suzi Chunk and Gareth Potter on the cymraeg version.

The tune is a reworking of an old Ken Dodd favourite, given a bouncy ska makeover. “Happiness, happiness, we are the Red Wall, Cymru am byth, I thank the lord that I am welsh, and off to the Euros not stuck on the shelf.”

For its bouncy tune alone, this song qualifies for the knockout stages of the Euro anthem finals, but throw into the mix the fact that this has been done in conjunction with SRTRC means they have pretty much got the trophy in their hands.

The fact that there won’t actually be much of a Red Wall due to Covid restrictions (at least not on the scale of France 2016) it a mere technicality. This tune will have us bouncing in our armchairs and hugging in groups of six or less, from Cardiff to Llandudno and from Aberystwyth to Offa’s Dyke.

Let’s see Skinner and try to Baddiel top this.