The People’s Champions, The Levellers,  roll into the Valleys in the middle of a storm.

Where to start? A difficult one. I’m not a massive fan of The Levellers, but I like them enough to shell out for a ticket when they roll into my home town.

I overdosed on the Levellers back in the tail end of the eighties when they seemed to be constantly supporting New Model Army, who I was a massive fan of. Its possible they only did one tour, it’s just that through the filter of thirty years of memory it feels like they were always supporting NMA.

It wasnt long before they took on their own life and started headlining their own tours and festivals. There was definitely a point when they had grown to be much bigger than NMA.

Although never a massive fan, I have certainly never disliked them musically. I’m not sure I put that over very diplomatically though during an after-pub-closing-time session in their studio in Brighton – resulting in us getting chucked out. Bloke from Flannel had blagged us in there, and the mention of the Levellers always invokes memories of the late great Bloke, so for that reason alone, the Levellers bring back happy memories.  (I’ve never had a chance to apologise,  so sorry Jeremy). 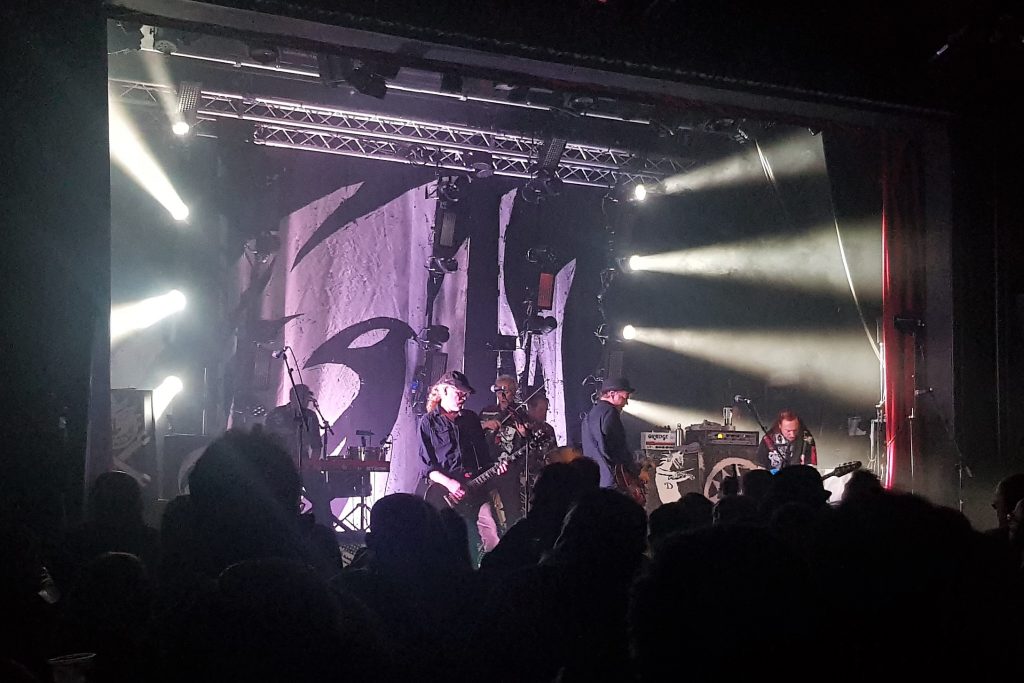 Whilst I’ve never rushed out to buy their music, I’ve always admired their social conscience and the things they put back into the counter culture. They set up the Metway in Brighton, for instance, to support local grass roots initiatives, they have supported the travelling community and they run their own grass roots non commercial festival,  Beautiful Days. Tonight they are helping out a Blackwood based homeless charity.

And in the past they have been very supportive of Peppermint Iguana, letting us interview them many years ago and bunging us the odd demo to review.

So when it was announced that they were coming to Blackwood there was little hesitation in snapping up a ticket.

When the day finally came around it was touch and go whether I would make it, storm Jorge was lashing south wales and there was flooding everywhere. But make it we did, just in time to catch the end of Sean McGowan’s set. No, not him from The Pogues, a young singer songwriter from the Billy Bragg school. (I generally try to avoid comparisons, but hey, he mention it himself on stage).

There was a nice crowd. Not uncomfortably full, room enough to be able to wander around but full enough to look like a packed house. Just how I like it.

And there was good cause to wander, loads of faces from the past to catch up with, faces that dont travel far for gigs these days but will turn out in droves when a big name drops by – which is not very often these days, although it does seem to be improving of late.

When the Levellers finally hit the stage a massive roar goes up the band immediately put their pedal to the metal. They have an impressive light show, clearly their own rather than house lights, unusually concentrating on the band being lit from the back, which creates a mean rock and roll vibe. 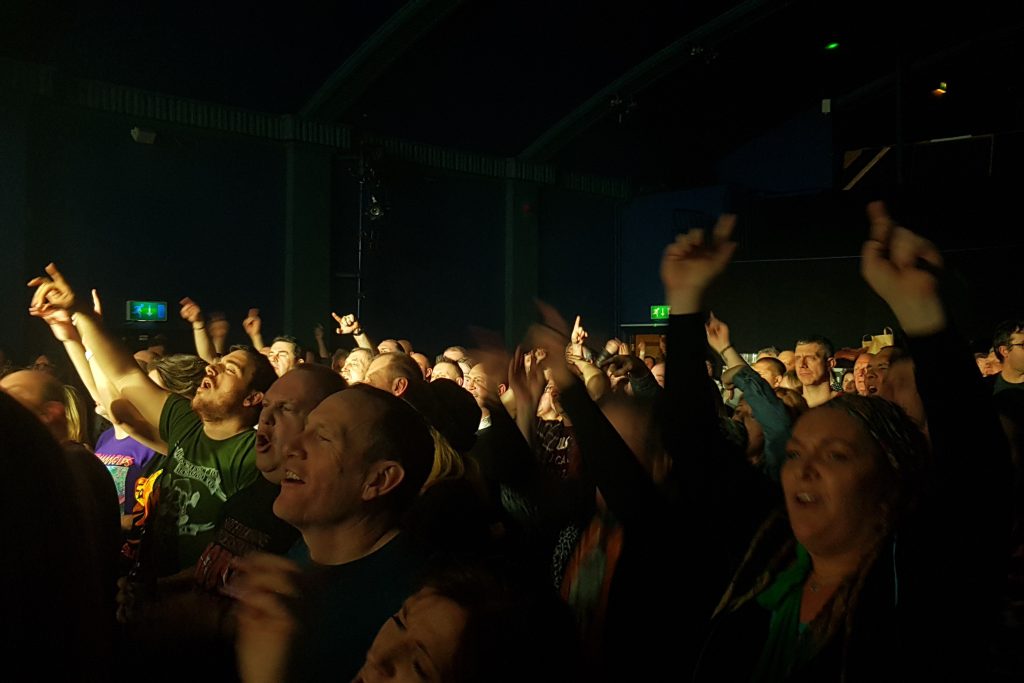 Despite not being a collector of Levellers music the vast majority of the set is familiar. Orbiting the same festival counter culture, it’s pretty much impossible to avoid hearing the Levellers on a regular basis.

At first it’s a nice vibe – surrounded by familiar faces, listening to familiar songs and everyone in jubilant mood. What’s not to like?

Then Stephen Boakes hit the stage, complete with obligatory ultra violet make up and dayglo clothing, and goes straight into a didgeridoo solo. It’s just like being at a nineties rave, but hey, the nineties were a great time to be around.

I’ve always been a sucker for the didge and at this point even this miserable bastard cracked a smile. The gig seemed to go up a gear from then on. 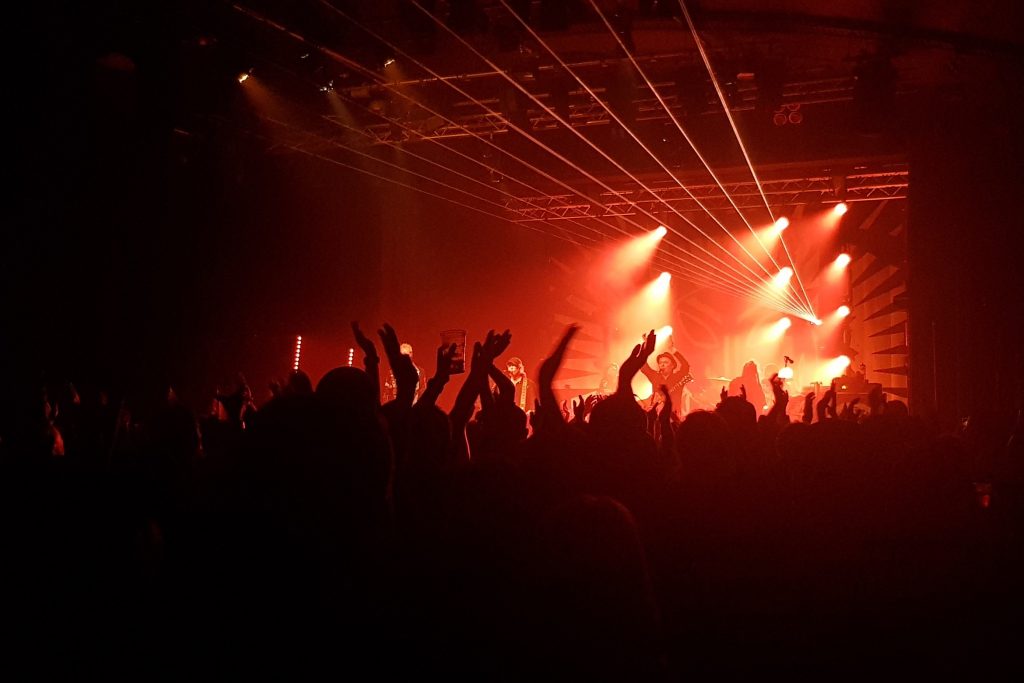 ‘One way’, ”Beautiful Day’ and, I think, ‘Belaruse’, were rolled out, along with the new single ‘Food, clothes and shelter’.  A thousand arms are thrust aloft, choruses are sung along to and many smiles are smiled.

Despite never having gone out and bought any Levellers music (and they have an extensive eleven studio album back catalogue), tonight proved the power of live music can and does trump sitting at home listening to a record.

Long may the Levellers continue to roll their thing across the land.

(And come on Blackwood Miners, you used to put on cracking gigs in the day, let’s have some more)