The Hang Massive kick off UK tour with first ever Welsh gig.

I can’t think of any other gig where I have felt the need to start the review with an explanation of what instrument is being played. But given this is the only band I have ever seen using a Hang, it seems the obvious place to start.

The Hang is a small flying saucer shaped instrument made of steel that is a descendant of the old Caribbean steel pan. It looks and sounds like an ancient instrument that Buddhist monks would have played in Tibet thousands of years ago – it’s just got that mystic, meditative vibe about it. However, it was invented in the year 2000 by two dudes in Switzerland. Apparently it falls into the Idiophone family of instruments. 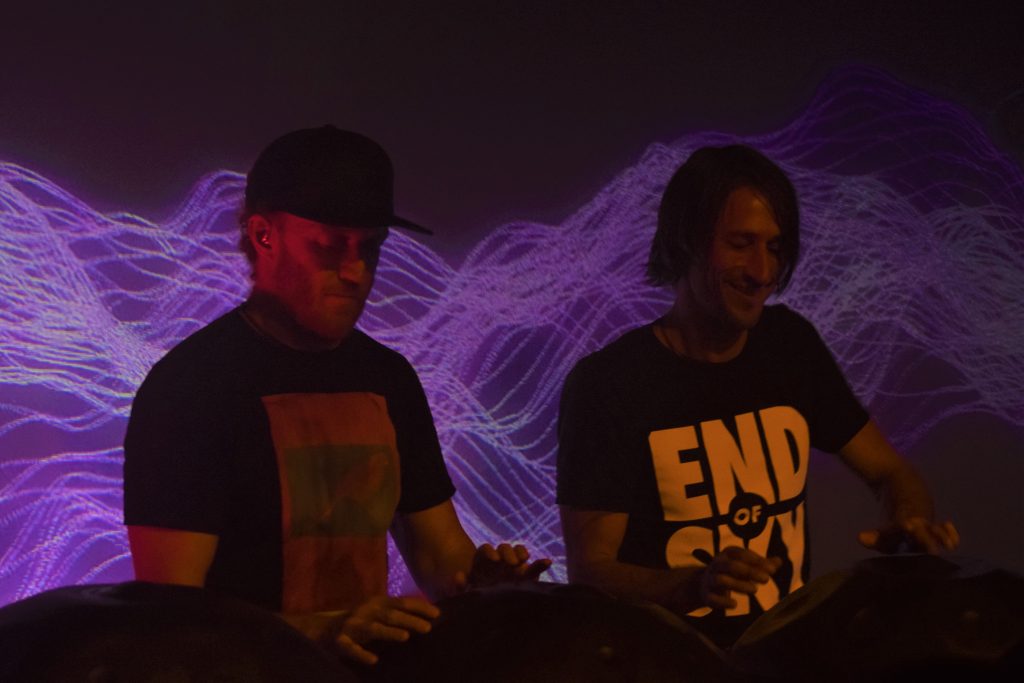 The Hang uses some of the same basic physical principles as a steelpan, but is modified in such a way as to act as a Helmholtz resonator.

So now you know.

I’ve only seen buskers using them before, but they dont come cheap  so tend to be restricted to use by people who have modes of income other than just busking.

The Hang is an achingly hipster instrument which is about as rock and roll as a cucumber, avocado and quinoa sandwich on sour dough bread with the crust cut off. But if you leave any self imposed street cred snobbery at the door and allow yourself to be immersed in the Hang sound, you will be transported to somewhere far more mystical and relaxing than the modern Swiss roots of this instrument suggest.

There is nothing to compair the Hang to, as it sounds so different to everything that has gone before. But I’m going to make a very personal comparison. I’m going to compare a Hang Massive album to John Martyn’s album Solid Air. There is no guitar on Hang Massive albums and with only a few exceptions they are purely instrumental – so an odd comparison to make. But the Massive invoke memories, sitting in the dark with only a candle and a special friend to keep me company, lost in the sublime sound that takes you somewhere else.

In some ways a Hang gig is counterintuitive. The sound is so hauntingly beautiful, you just automatically close your eyes and drift away on a musical magic carpet. You dont need a dancefloor,  a bar, or even your mates to hang out with. You certainly dont need to be surrounded by people chatting and taking selfies. 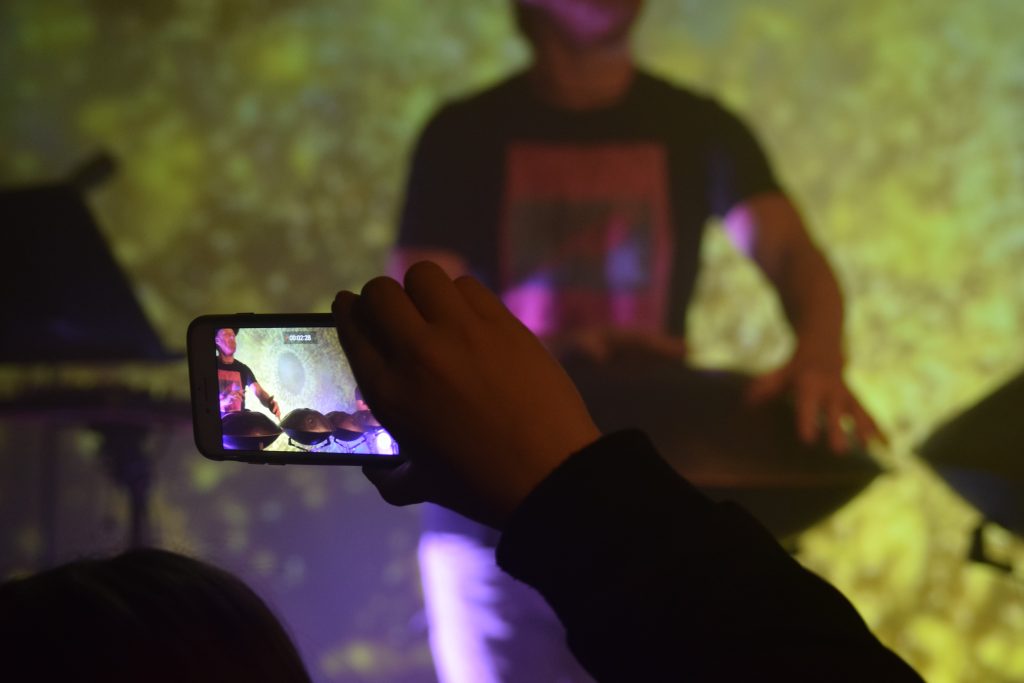 You just need a decent set of headphones and a hammock.  And perhaps some Asian sunshine on your face.

Along the front of stage a row of Hangs is lined up. Presumably all tuned differently.  On either end is a small sampler/drum machine that is used to add depth to the chimes of the Hang. Behind is a huge screen, onto which s series of appropriate images are projected.

That’s right, projections. If you were planning on standing there with your eyes closed, think again. 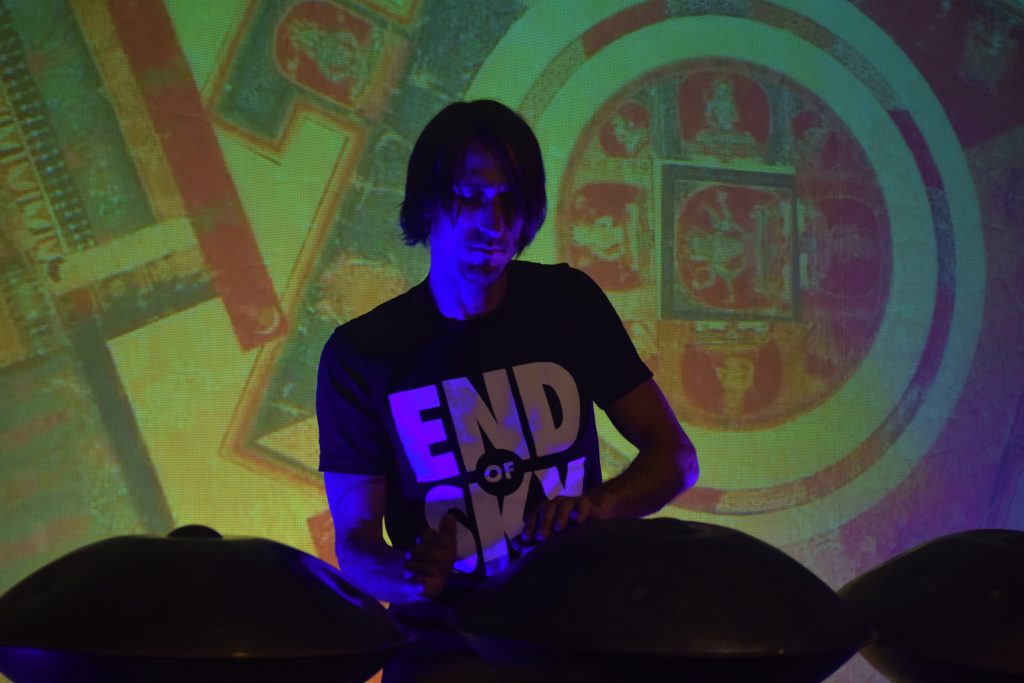 The band, Danny Cud and Marcus Offbeat, unceremoniously walk on stage and without saying a word, start the gig. A preset minimalist beat emerges from the drum machine and the guys start tapping their Hangs. Yes. Tapping. They are wired up so there is no need to bang like a drum. You cant get much more laid back than this.

The visuals kick in and we get a stream of chill out images on the backdrop.  We float between images of Buddhist temples, infinite fractals,  and drops of water in a calm pond. Each image enhancing the sound and making you glad you kept your eyes open. Simple yet engaging, the visuals draw you in and help you forget you are in a room full of people going back and fore the bar. At one point the visuals were so immersive I had to look away, I thought I was going to keep over. 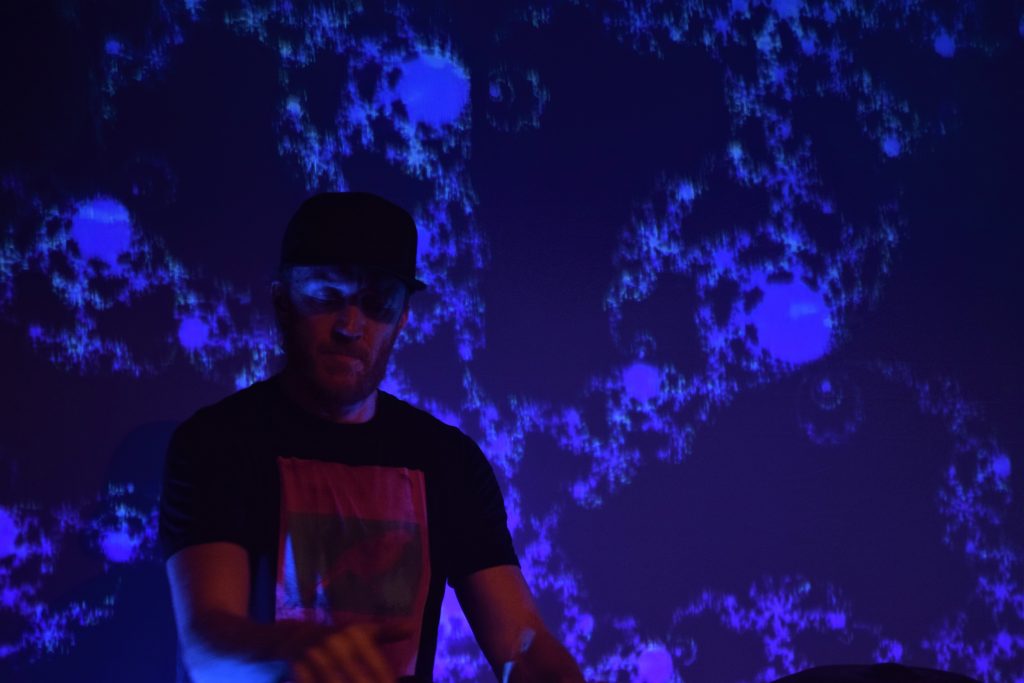 But the music. We are here for the music. We gently wander through the back catalogue of the Massive, taking extra time to admire the most recent album, 2018’s Luminous Emptiness.

Tbe problem I have with instrument music, especially from a band that specialises in instrumental tunes, is the lack of lyrics is a barrier to actually recognising each tune and putting a name to them. And if the band dont introduce their tunes, you are snookered.  But it’s not the end of the world. You can recognise tunes without knowing the name and enjoy them in the moment (it’s just hard to pick them out off the album to listen to again  – (sometimes the search is half the fun).

Dispute the bizarre concept of a Hang gig, they have the audience swaying, grooving and grinning like Cheshire cats. Between songs we get rapturous applause and adoration. 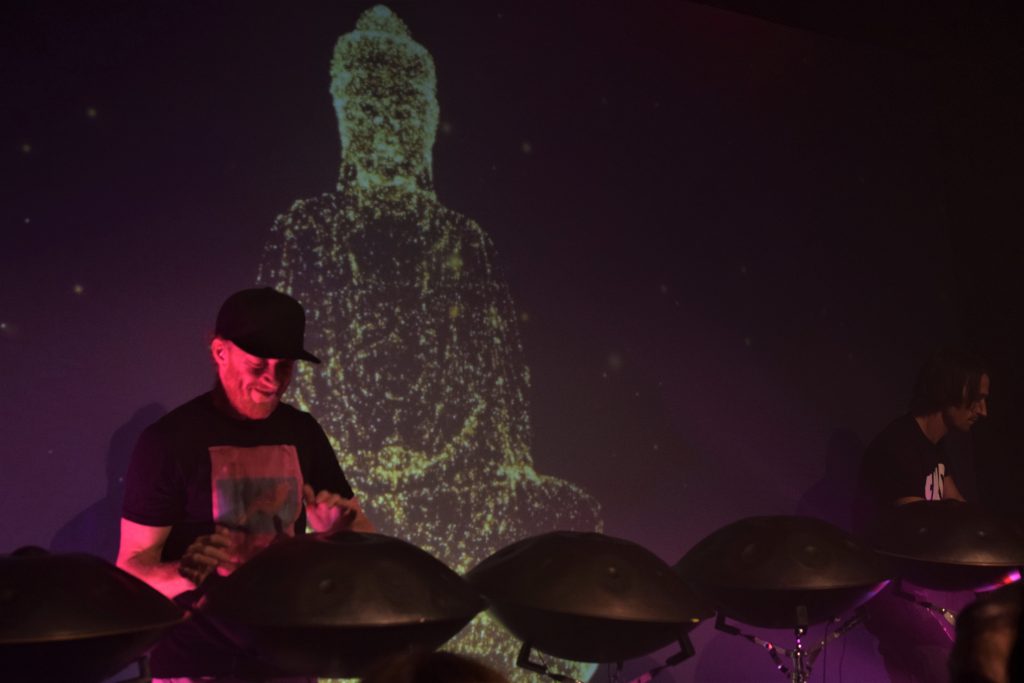 There are slighly up tempo moments that inspire arms to wave in the air as if it was 100bpm faster than it actually is.

Towards the end we get ‘Once Again’, the viral hit (currently standing at 42 million YouTube hits) from 2011 that made their name. Then after a brief return to the dressing room we get an encore that still leaves the crowd baying for more at the end.

If you’re worried about whether their chill sound works live, worry not. Go see them. If you’ve never heard of them, just take a punt. Go see them. Just once. You might be surprised.