Today marks ten years since Bloke left the building. Bloke had more life in him than any other person I have ever met – and that is going some.

Below be the thoughts I put on my old blog at the time. 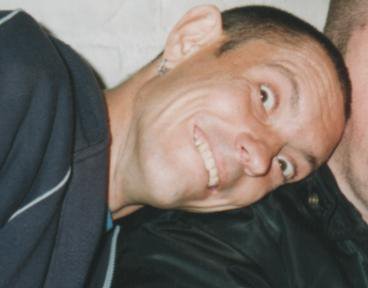 R.I.P. BLOKE: A personal thought on the death of a dear friend.

No posts for a while, I have been a little bit on the busy side, then when I switch on my PC to write something, I am hit by an e-mail that brings me the tragic news that my mate ‘Bloke’ has shuffled off this mortal coil.

Bloke was the bass player with Brighton band Flannel. Not exactly a big name in rock but they were a bit of a cult on the festival scene. Yeah, I am sure Bloke would like them being described as a bunch of cults.

I first crossed their path when they came and played a Peppermint Iguana gig for us In Blackwood, supporting Bhang II Rites. They crashed out in Iguana HQ after the gig, and it was soon obvious it was going to blossom into a lasting relationship.

We all hit it off on many levels, Bloke’s sense of humour in particular never failed to have me in Stitches. My head is filled with many memories of him, from that crazy bank holiday weekend they spent with me, through the times we met up at gigs and festivals and the times when I just went to Brighton to visit them.

I have a vision in my head of Bloke crowd surfing at his 40th birthday party which I cannot get out of my mind…. laughing his head off like a little kid, and that is how I will remember him, always happy and up for a laugh. Flannel had split up at that point and Cosmo, the Guitarist had come to live in Wales, but they got together for Blokes 40th. I can remember being invited now, when he rang me I was being chased through Dublin by riot cops with water cannon, I was at an anti EU demo. The whole party thing was a bit mad, the gig was in a pub owned by Mad Frankie Frazer, and the support band featured the son of comedian Mark Little (Joe Mangel from Neighbours). The crowd was rammed with all the names from the Brighton scene, Tragic Roundabout, Headmix, and a few ex Tofu Love Frogs, to name but a few. After their set, Bloke was picked up by the crowd and passed over their heads to the bar.

I once got to perform with Flannel, they were doing this punk rock karaoke thing where they invited friends to come up on stage with them to perform their favourite punk song. They contacted me a few weeks before Glastonbury and asked me to pick a song, I picked ‘Fuck Off’ by the Electric Chairs. It turned out they were doing this as headliners on the Saturday night, all be it on the ‘Mille and M Dome’ Stage in the Greenfields. We waited ages for them to come on, Rory McLoed was on before them and he kept on and on and on, we thought he would never go off. I missed all the bands I wanted to see that night because I was determined to do this with Flannel. It was amazing, one of my best memories of Glastonbury in 20 years of going there.

We met up in June 2003 (when the picture above was taken). Bloke managed to blag us into a recording studio after stop tap so we could have a ‘chill’. It turns out it was the Levellers Studio and we eventually got chucked out for misbehaving (mainly me telling Simon Leveller I thought his band were shite)… Bloke was quite literally  rolling about in the gutter cos he thought the whole sketch was so funny.

I am sure he had his down moments, but I never got to see any.

Nothing was serious to him, from his ridiculous attempts at a Welsh accent. … “Who’s coat is that jacket”, to his stupid text messages.

For the last few years he and his wife Sal and their kids had been planning to live in Europe, they spent ages doing up a little bus, so long I was having doubts as to whether or not it would really happen. Then one night I was in Eastbourne I sent him a text to say how crap it was there and suggest I pop down to Brighton to see him, but he simply replied, “Yeah, I know, it is really crap, but it is great here, I live in France now.” The family had moved to the Pyrenees and apparently had found their little piece of heaven.

Then a couple of days ago I received an e-mail from Cosmo to tell me that Bloke had had an accident, details are a bit vague but it would seem he fell into a ravine and did not survive.

I was stunned. Our meetings had not been numerous, but each one had been memorable and I feel privileged to have had the opportunity to share a little bit of him.

I suppose the one saving grace was that in his 40 odd years with us he packed more into life than many 80 year olds, and at the end he was living his dream. Not much consolation for Sal and the kids at the moment, but I for one am determined to remember him with a big grin on his face and a wicked glint in his eye.

Cosmo recently joined us on the Peppermint Iguana Radio Show to talk about life, the universe and everything. Needless to say, Bloke and Flannel came up in the conversation. You can listen again to the show here.