Long awaited Tarantism seventh studio album is locked and loaded, ready for release in May. 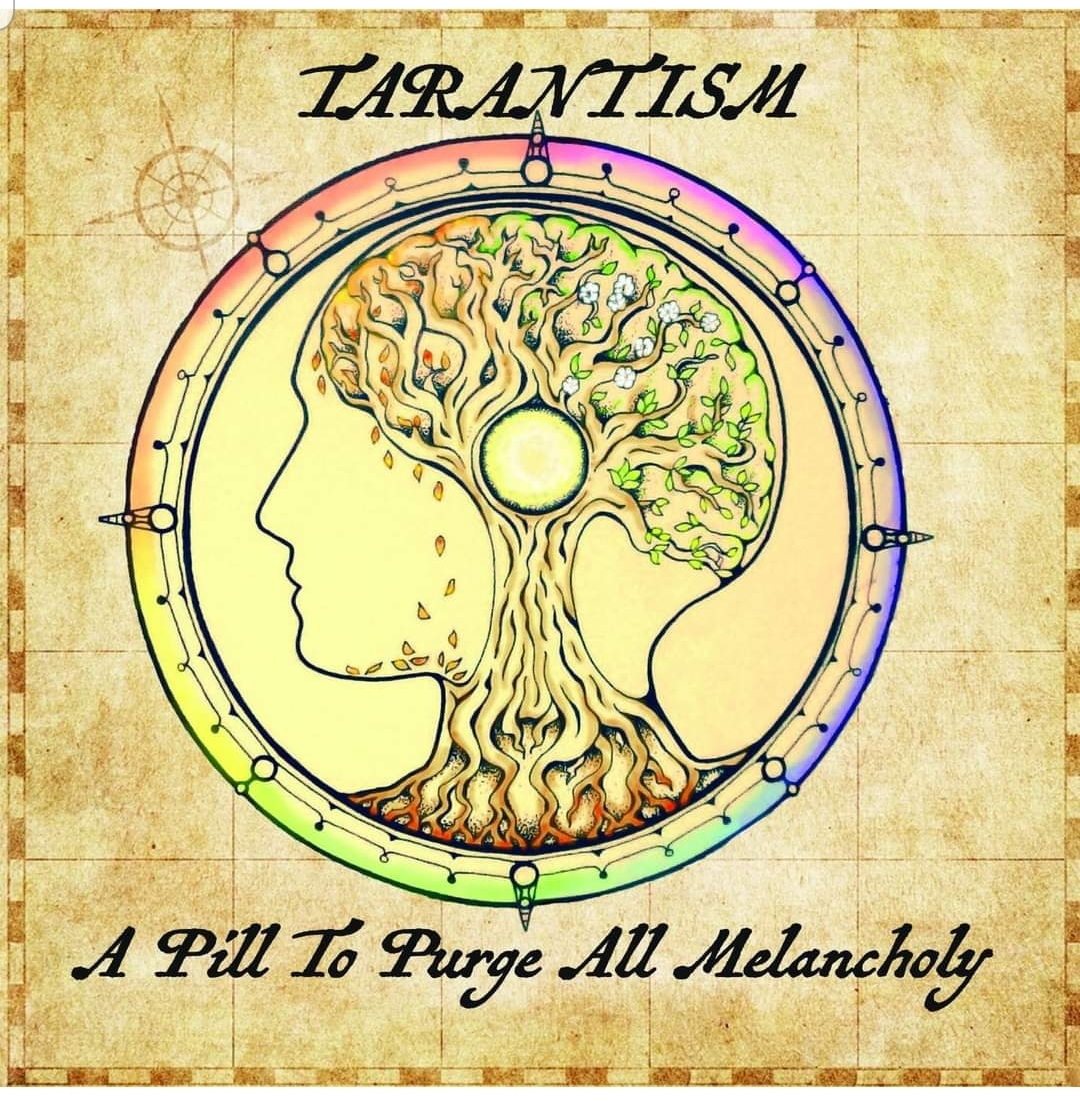 Tarantism have been creating dust clouds and mud baths in festival fields for over a quarter of a century now, getting people to dance wherever they turn up. Seven albums in that time is not prolific, but hey, they have each been worth the wait.

We will excuse them; band members are spread all over this green and pleasant land and they do have a few other projects on the go. Members of Tarantism are also involved in AOS3, The Brewer’s Daughter and Hawkwind. Not to mention the slimmed down Tarantism Folk Disco.

Pressing play on track one, ‘Good to see you again’, the first thing that hits us is the clear crisp production. We only listened for a few minutes on the laptop, we had to get it on the sound system. This is an album all good stereos have been waiting for. It’s an audiophiles delight.

The second thing that hit us was Mel’s voice. We have known her long enough and seen her live enough times to know she ha an amazing voice – but damn does this production bring it out.

That opening track is particularly meaningful. Tarantism’s raison d’être is to perform live, particularly for the festival family. They are not just a band that are popular with festival goers, they are festival goers. They are an integral part of the tribe. They step in when other bands have forgotten kit, or indeed, forgotten to bring members of their band with them. They feed others, they give sage advice, they are part of the glue that holds the tribe together. So they are not saying its good to see an audience again, they are saying it’s good to be back amongst the family now that festivals and gigs are starting to resume.

‘Good to see you again’ introduces us to the beautiful voice of guest vocalist Willow Simone, a festival/travelling friend of the band, she also appears on ‘Anita’s Lament’ and ‘Alienation’. “She is a remarkable talent”, Mel told us. “And only sixteen when she recorded the largely improvised vocals. She is now in London at music college and we expect great things from her”. So do we Mel, so do we.

Whilst the band are renowned for their up-tempo jig about tunes, ‘Good to see you’ is a slow, thoughtful start to proceedings. ‘Anita’s Lament’, the second track, sees the pace picking up a little bit. As if the band are slowly warming themselves up, like athletes getting ready for a race.

By ‘Alienation’, track three, we are almost ready to rock. With a solid rhythm pounding out from bassist Andy and Mark on drums; Magnus flicks the punk switch on guitar and even has a go at vocals.

Anyone that has paid any attention to the band in the past will have looked up the band name and established that ‘Tarantism’ is ‘a psychological illness characterized by an extreme impulse to dance, prevalent in southern Italy from the 15th to the 17th century, and widely believed at the time to be caused by the bite of a tarantula’. And track five, ‘Tarantelle’ will induce and extreme impulse to dance, although we are assured that no spiders were harmed in the making of this track. It is also based on ‘Barden-Klänge’ by Austro-Hungarian guitarist and composer, Joseph Kaspar Mertz (17 August 1806 – 14 October 1856). As cover versions go, they don’t go back much further than this.

‘Kaz’s waltz’ is a tribute to the festival legend that was Kaz Marsh. The driving force behind the infamous Kaz Bar, puppeteer and all-round inspiration, who sadly went to the great festival in the sky recently. “For all the fallen of our tribe, raise your glass with me tonight, I have no pills just bring me wine, I still can’t bare to say good bye”.

“It was pretty much written on the way home from her wake”, Mel reflects. “It was incredibly difficult, our emotions were so raw at losing an old friend suddenly, we had to play the song over and over to be able to do it without crying, maybe in a way though that was cathartic. It became the centre of the album and was the last song to be written for it. We had been aiming to write an album that provoked emotions, following the ancient ideas that held particular tunes, rhythms and colours to have the ability to cure. When we played at the wake it was a very powerful reminder that people need music to be able to grieve together and to laugh at memories and dance and carry on through loss”.

Next up comes a tune we can imagine Kaz getting down to, an instrumental hoe down, ‘Larks on Acid’. An up-tempo tune that is nailed on to be a live favourite in years to come. Mel gives her voice a rest and concentrates on whistles, whilst Rhi gives it some welly in the diddly fiddle department.

A cover version of eta James’ ‘I’d rather go bind’ slows the tempo down a bit. Why cover this tune? “I’ve always loved the song,” Mel explains. “It’s a great one to get my diva on! We often mess around with covering different songs and most don’t go further, but Magnus got really drunk one night and the sobbing guitar solo came out and, well, its full of emotion, so fitted in with our ideas for this album”.

We have never seen the point of doing a cover version unless you can bring something new to the party. Now, this is a bold claim, but it comes back to what we said at the beginning about Mel having an amazing voice – we think it is actually better than the original – and that takes some doing.

Bringing the album to a close we have ‘Song of Siekilos’, which could conceivably be classed as another cover version, although composer is unlikely to be chasing the band for royalties. It is the oldest surviving complete musical composition, including musical notation, from anywhere in the world. The epitaph has been variously dated, but seems to be either from the first or second century century (So the ‘Tarantelle’ number is a positive newie!). The song, the melody of which is recorded, alongside its lyrics, in the ancient Greek musical notation, was found engraved on a tombstone from the Hellenistic town of Tralles near present-day Aydın, Turkey, not far from Ephesus.
Not only is this album glorious to listen to, it is educational!

The elephant in the room is that this album has been recorded in the middle on several lockdowns. “We had starting recording it while we still lived at Rockaway Park”, Mel explains, “and we had access to the studio there. Well, we at least had drums and most of the bass down. Then Magnus was touring with Hawkwind and we moved to Wales. Just as we were getting back to it Covid hit”.

“With half the band in England and the other half in Wales, which had different lockdown rules at different times, it got really complicated. We managed to do some guitar, whistle and vocals in our home studio and did a fair bit of sending things over the internet. Then in between lockdowns we managed to get to our mate Phill’s (he’s worked with lots of bands including recording tragic roundabouts album and Headmix’s) studio and get the rest of the drums and bass down. Rhi visited us as the second lockdown finished and we got the last bits of fiddle and vocals done.”

We couldn’t help but wonder if clouds have silver linings and all that, with lockdown actually freeing up time to record because of the lack of gigs. “Whilst it did help in that we had time to do the mixing and artwork, it obviously impacted as we would usually play new tracks a lot with the band and play them out, as songs evolve when you do them live. It also meant that we had no money to finance it. The release of the ‘Live at the Horsedrawn’ album last year helped with that and also donations when we did some online gigs in lockdown, so thanks to anyone who contributed.”

“The mixing has been done by Magnus at home and over the internet, sending mixes to the rest of the band for their input, with our son Silas doing final mixing and mastering. He is a producer and writer mainly making beats for rap and hip-hop artists and knows a lot more about modern production than we do.”

And as we said at the top of the interview, the end result is a beautifully crisp and clear sound.

Overall, it is an incredibly mature album, varying from hauntingly beautiful ballads to full on floor stompers – but all juxtaposed perfectly. It’s best listened to from start to finish, like we did back in the day. So set aside some time to just sit down and listen without any distractions.

The good news is that when it is released in May there will be a nationwide tour (including a gig for Peppermint Iguana in Newport’s Le Pub on 12th May). The bad news, is that this will probably be the band’s last full tour, various logistical issues making life on the road increasingly difficult. We are pretty sure they will still turn up at the odd festival though.

And Mel and Magnus already have an acoustic English folk/Appalachian album in their minds, so it aint the end of the road just yet. They are, after all, suffering from a psychological illness characterized by an extreme impulse to dance. So will you be when you hear this. 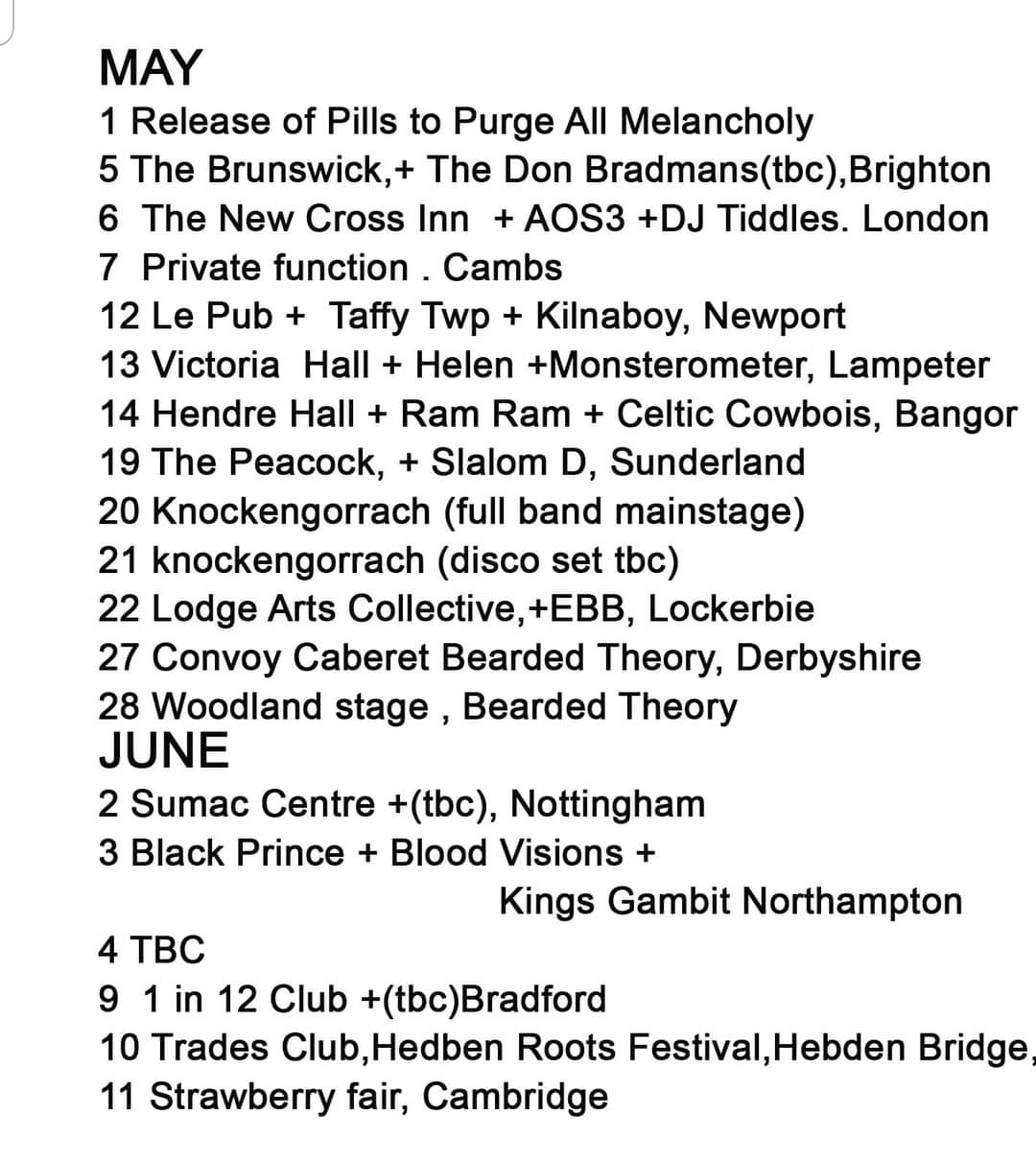