Still not quite done yet. We have another day of full on guided tourism to go. And there is a lot to see in Xian.

After breakfast we jump in Mr Hu’s Toyota Chariot and we are transported incredibly safely to the Shanxi History Museum.

While we wait for the gang to gather, I chat with Timo about music. Without batting an eye lid I am provided with the top five rock bands in China. I will have to wait till I get home to find out if I am missing out on something credible, but it is a starter for ten.

The museum is split into three main galleries.  A lot of the artefacts here date as far back as six thousand years. That’s four thousand years BC. I’m pretty sure that back in Britain at that time our ancestors were living pretty basic lifestyles. Over here though, the ornamentation on their pots went way beyond functional.  The design and decoration of both bronze and pottery vessels was intricate, highly sophisticated, and technically advanced, with many of the specimens of a standard that would sit well in any shop today.

The Ming dynasty is renowned for its pottery, but I had always associated it with fine china and intricate paint work. But some of the figures from fourteen centuries ago would look well cool on my mantle piece and have not dated at all.

Inevitably there was a Terracotta Warriors display but we’ve seen them in their proper home. That might sound cocky but hey, it’s been that sort of trip.

A short blat away in the Hu-mobile and we are at the site of the first ever Buddhist temple in China. It was set up by the dude that first brought Buddhism to China from India. The Temple is a pagoda of the tower variety.  Unusually it is made of stone rather than wood. It leans slightly because constant development of the city had resulted in the water table shifting in the 1990s and the ground drying out. However, the tower has a remarkable semi spherical foundation so, just like a Weeble, it will wobble but won’t fall down.

We are given an extremely informative tour by a Buddhist volunteer. In one of the buildings there is a three dimensional diorama of the life of Buddha made out of jade of various hues and shades. I might have got this wrong but I am sure she said it had the same value as half of Hong Kong.  I didn’t see any armed guards though.

Out of the blue we are whisked away to a private room where we are shown a specimen of the original Buddhist text. Then we are sat down for a lesson in calligraphy. Alarm bells start to slowly ring.

We are taken into an area with some truly fine ink paintings on rice paper. I note they all have prices on. Ever so slowly the alarms get louder, then the lights start flashing.

Our guide has suddenly gone from mild mannered Buddhist to used car salesman.

My eye is taken by one small painting and I go for it, but as we are ushered into the full on gift shop it’s like being in Empress Car Sales.

Even if there is something nice there we aint going to buy it because we are too busy looking for the exit. It’s counterproductive.  And a shame because it is a very special place.

As we sit waiting for lunch to be served I bring up the subject of music again. Timo tells me there are very few record shops in China, most people prefer to stream or download their music. Not a total shock, but it seems almost no one bothers with buying physical releases.

Lunches have taken a turn for the better the last few days and today is no exception.  Not as posh as yesterday, more the Chinese equivalent of Harvester or Nando’s, but fine grub indeed. And very edible.

Edible is not a word that could be used about some of the things we see in the food alleys in the Muslim Quarter after lunch though. We are in scorpion on a stick, goats heads and fried whole squid territory. 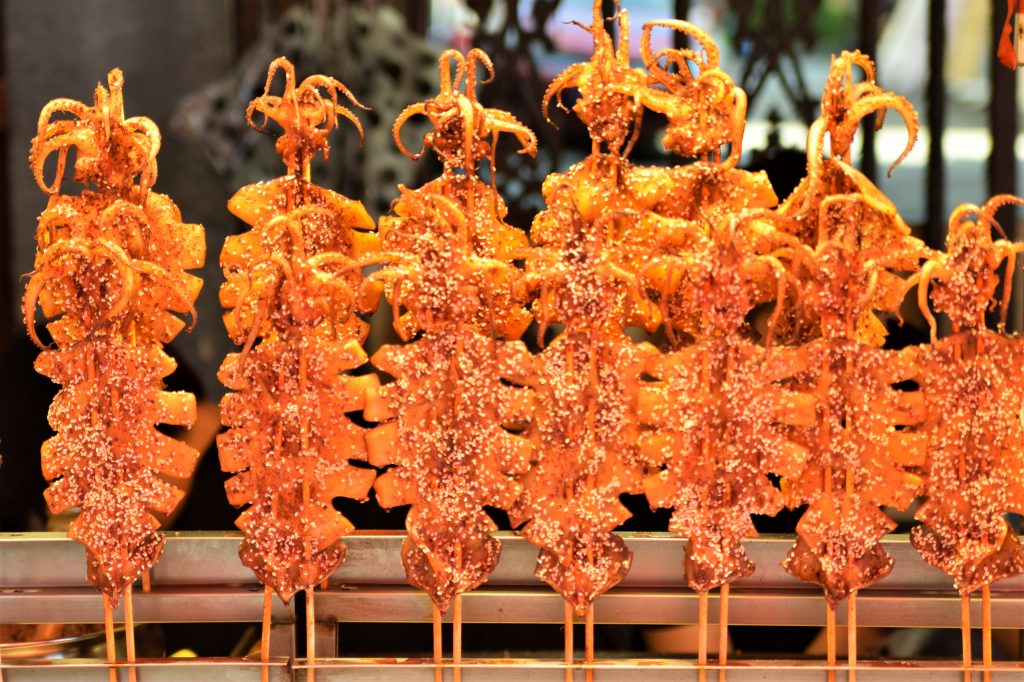 There are fifty two ethnic groups in China. Han make up the majority of the population.  Eleven of the ethnic groups are various strands of Muslim faith. Whilst in Europe most Muslims are of an Arabic, Middle Eastern background, here the Muslims are all Chinese. You cannot tell them apart from any other Chinese person.

There has been friction of late with some sects of Muslims and the state, to put it mildly. Timo tells us many of the radical muslims are being ‘re educated’.  Western media tells of concentration camps.

Inevitably the truth is probably somewhere between the two versions. I lean towards the western media version. But I have to say, it is very difficult to totally buy into the oppressive regime thing, you dont feel it when walking down the street. It all seems so friendly.

Having said that, as we are walking around Xian, protestors in Hong Kong are having their heads caved in by police. It’s all just surreal

Here in Xian there is no issue with islam,  peace, harmony and good will rules.

We walk through the Muslim district, first down a street selling weird and wonderful food, then down an alley that is effectively a flea market.

Whilst ancient Datong was impressive, this place does not feel particularly ancient, but it does feel more authentic.  A local bazar for local people. The hustle and bustle is exotic and exciting.

Then, completely by surprise, we are away from the hustle and bustle and in an eerily quiet courtyard. It was almost as if someone had turned off the Muslim Quarter.

In an unexpected twist, the mosque was significantly more peaceful than the Buddhist temples we had visited and far less busy. There did not appear to be many tourists, simply people seeking solace and tranquillity.  Whilst there was a small gift shop, there was no hard sell. Either you wanted an Islamic hat or you didn’t.

There was one negative.  Due to the lush vegetation in the compound, all the mosquitoes in China appear to have congregated in the courtyard. The bite count trebled in a few short minutes.

We spend some precious time absorbing the ambience of the temple but soon the mosquitos become unbearable and we head back out into the big bad world.

Our final historic sites of the trip are the bell and drum towers. Two vast structures, one containing a bell, the other containing a – I’m sure you can work it out. The Bell tower is always to the east of the city. As the sun rises from the east the bell is used to chime the hours as the morning progresses.  Once mid day arrives the drum in the west is then used to chime the hours of the PM as the sun slowly moves westward towards sunset. The bell and drum are big enough and loud enough to be heard throughout the city.

This is common in many cities in China.  But in Xian the towers are redundant, serving only as a tourist attraction these days. They have been replaced by an electronic chime that booms out on the hour, along with an electronic voice praising Chairman Mao. One of the many things about the city that is Blade Runner-esque.

After a much needed chill we head down to the south gate. Apparently it looks spectacular illuminated at night. When we arrive the sun is still up so we head for the mythical bar street, which it turns out was right behind sketchy art street.

Timo has a theory. When Chineese people go shopping, they know what they want. If they want, for instance, art materials, they go to an area where there are lots of art materials shops. If they want food they go to a street that has lots of food stalls. And so on. They don’t want to try on a pair of shoes then have to wander half way across town to find another shoe shop before deciding to go back and buy the first pair they tried on. Simple really.

So if you want to go for a pint in China, you go to bar street – which is where pretty much all of the bars in the city are clustered.

We are pleasantly surprised to find a row of bar after bar. Not restaurants or cafes that sell beer, but proper bars. Like Mill Lane in Cardiff.

As we walk along they try to drag us in. Again, counterproductive.  We walk on. As we progress up the street the pubs become more laid back. We stumble upon The Tribe Bar. They don’t try to drag us in and the music sounds very civilised – chilled jazzy trip hop. Best music we have heard in China so far. Next thing we know we are on our third round of Belgian beer and are Shazamming the music. We might have finally discovered decent Chinese tuneage.

Eventually we decided the sun has gone down enough to check out the illuminations on Welcome Square. Unusually, they turn out to be a bit shit. In fairness it looks like they might be building something on the square in preparation for the 70th anniversary celebrations.

It must be a sign of old age. We have only been here two days (or is it three) and we already know where all the public toilets are on the route home.  We make it back to the hotel without any trouser accidents.