Up at the crack of dawn, we were ready and waiting for Lucas, our guide for the next few days. No sign of our transport though. There was a marathon on and the old town was in lockdown.  Not a major problem, because there was loads of stuff to see but a short walk from the hotel. All the historic stuff had been built within spitting distance of our luxurious abode. I know, because I saw someone spit that far. They do like a good spit the Chinese.

As we walked towards Buddhist temple number one several athletes on course to break their personal record paused to have a selfie taken with the European bearded ladies and the blonde giants (I might have got that the wrong way around). 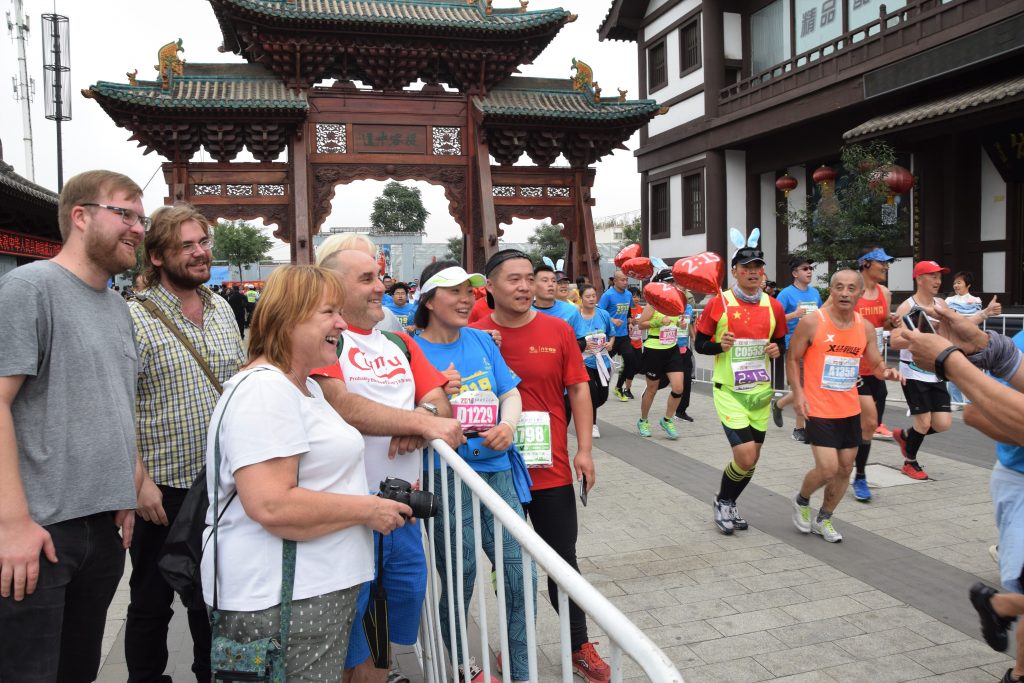 Lucas ushers us into the temple and commences what would turn out to be an extensive idiots guide to Buddhism.  The centre piece of this site is over a thousand years old. Although many of the buildings in the complex are less than a decade old. It is difficult to tell the difference between faux and the real McCoy. 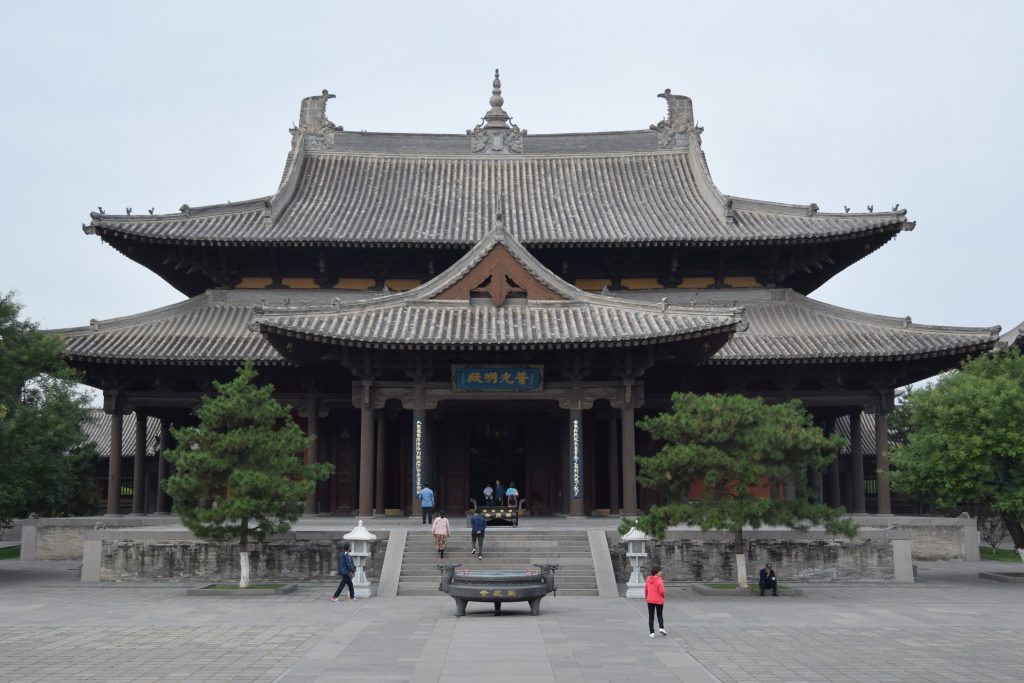 Whilst the old town looks like Shangri-La, it is controversial.  Many of the locals living in the old town have been evicted in recent years. Modern buildings bulldozed to make way for ancient pagodas. But tourism is being used to fill a gap created by the closing g down of the local industry. 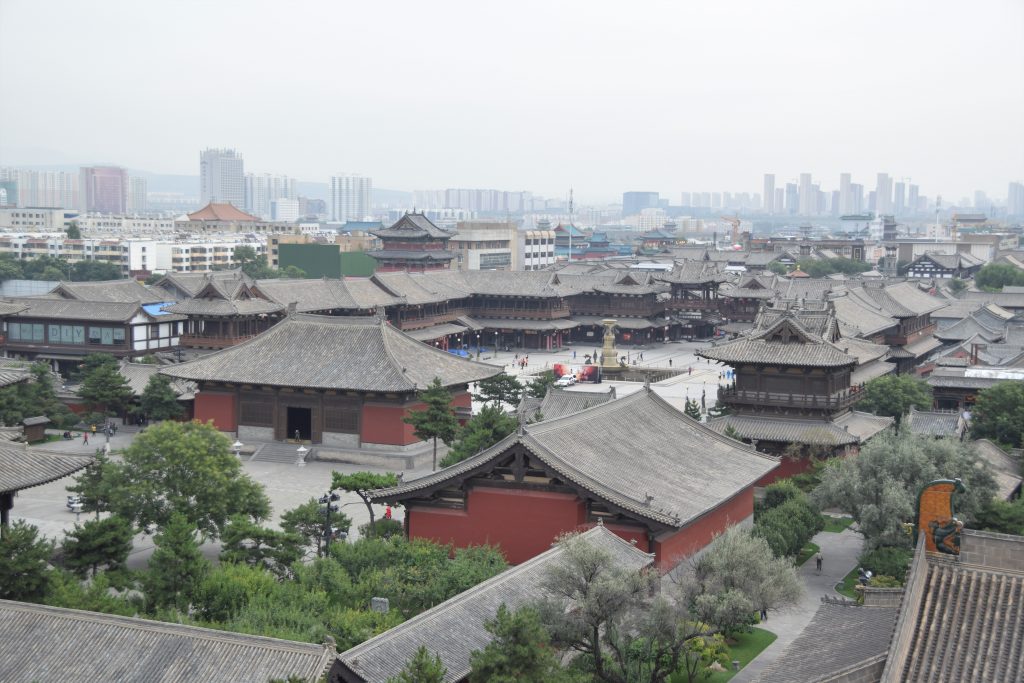 Datong has for many years relied on coal mining for employment.  Now, in an effort to move away from fossil fuels, the mines are being closed down. As we walk to our next site of interest I chat with Lucas, telling him of how the coal mines of South Wales have also been shut down. Not for any environmental reasons though, but as part of Thatcher’s bid to neuter the trade unions.

Lucas is keen to learn more of my thoughts on Thatcher as we wander on to the subject of privatisation, Reganomics, globalisation and socialism.  Lucas himself becomes a major part of the tour, as we spend the day exchanging ideas on culture and politics. The Welsh language, family values, beer drinking, Brexit and racism in Alabama are just a few of the topics covered. (Lucas has spent twelve years living in Alabama, returning with three degrees under his belt).

We stop off at a nine dragon screen. A large mural wall with nine dragons on. It dates back to the Ming dynasty, but for reasons I have failed to retain, it has been moved a hundred yards from it’s original location. It has a nice little courtyard in front of it and a little old lady selling Chairman Mao playing cards for a quid. None of us were mug enough to buy a pack. Well, we all bought a pack actually. 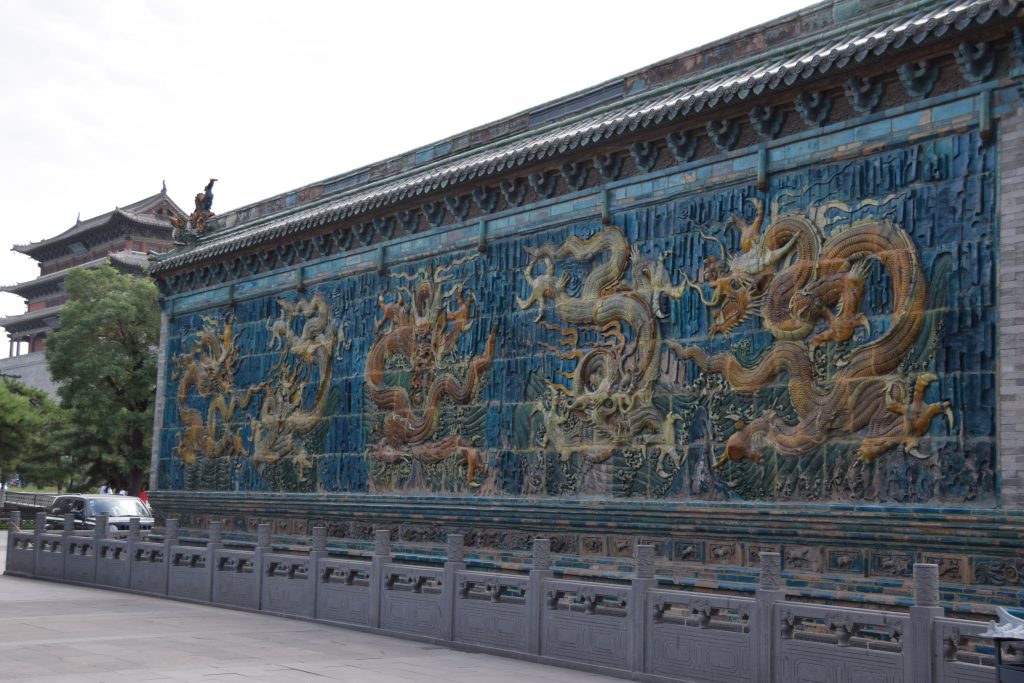 “Not another temple”, we all cried, but were soon rushing up the stairs of a multi storey pagoda to admire the views of the old city, including the ancient city wall (completed in 2018).

Down in the basement the walls, floor and ceiling are covered in copper and amongst the copper Buddhas are little copper earns containing the remains of deceased monks. 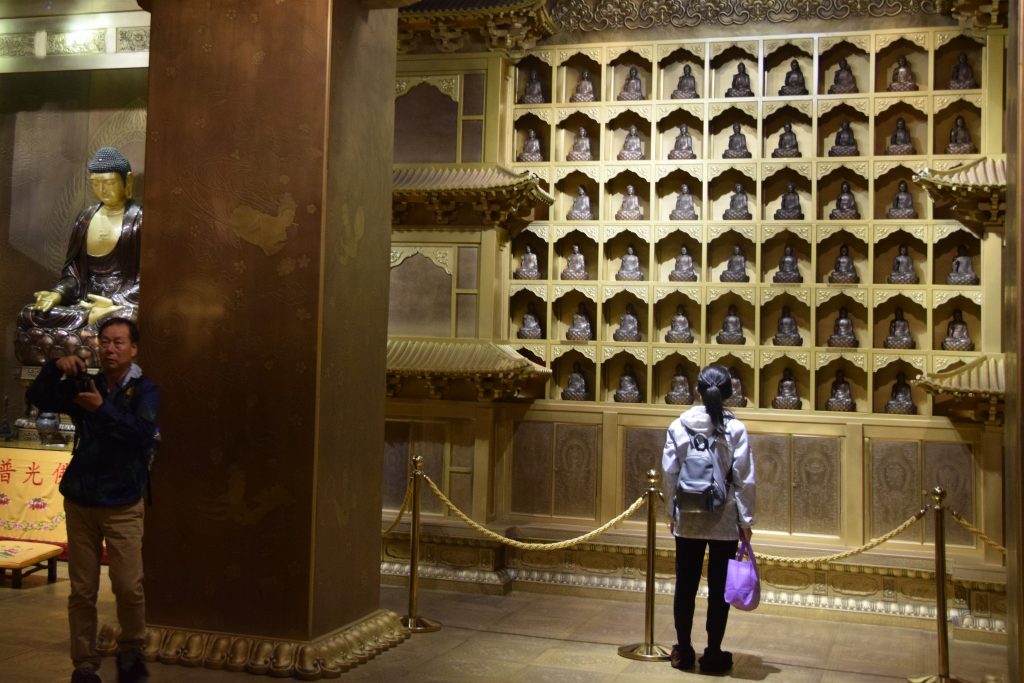 We then head out of the old city and stop of at a restaurant for a smorgasbord of unidentifiable dishes, including many that we are advised contain pork, although which bit of the pig is unclear. Frustratingly we are not sure how many dishes will be served so we get stuck into whatever is put in front of us. Eventually we have our fill but the dishes keep coming.

It is weird. Back home we would not entertain using chopsticks but out here knives and forks don’t enter our heads and just get stuck in with the traditional local eating irons.

More temples in the afternoon.  But with a difference.  We head for the UNESCO world heritage site of the Yungang Grottoes. Fifty Three grottoes with 51,000 statues, dating back to the 5th and 6th century. A staggering feat of craftsmanship with temples and Buddha’s carved into the face of the cliff. Whilst none of us are religious, we can’t help but admire the craftsmanship and dedication that was required to build these grottoes. Although, we do wonder which one Santa is hiding in. 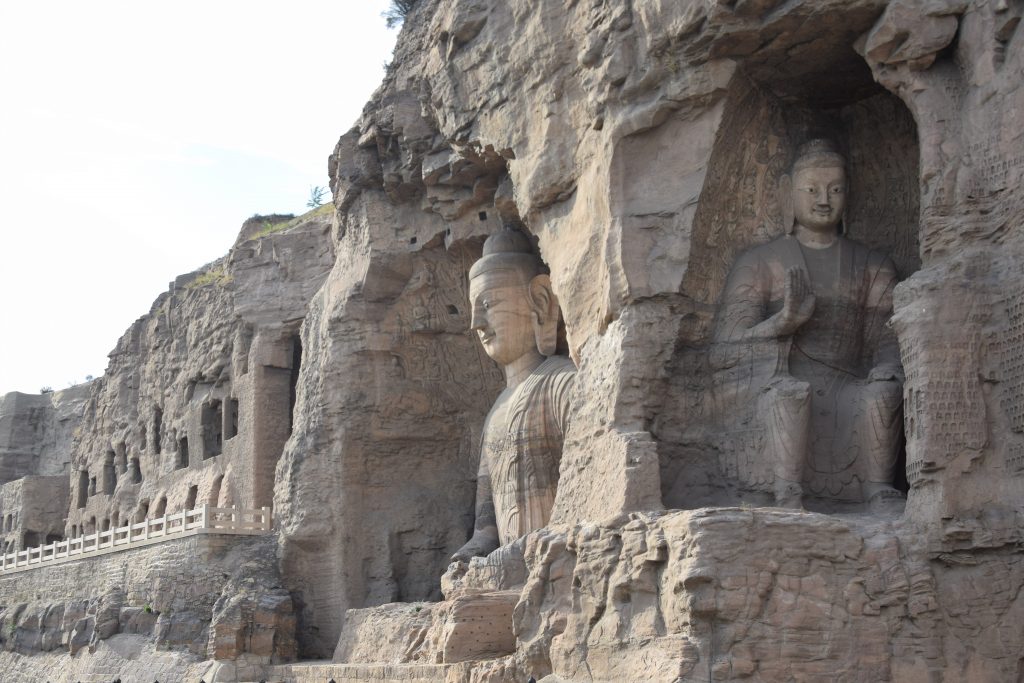 On return to the hotel I rush out to try to catch sunset on the city wall. Getting onto the wall was not as simple as I had anticipated.  First I went through a gate into a ‘Castle Black’ type set up (see Game of Thrones). In the first courtyard there is a market selling tacky shit. I then have to go into a second courtyard which is occupied by a tacky fun fair. I finally ascended the wall and start firing off shots with the camera.

I had missed the sunset by two or three minutes but manage to catch the red sky behind the skyscrapers that frame modern Datong.  As I walk along the wide city walls I curse missing the sunset by such a short margin but the towers that break up the line of the wall soon start to flicker into light and a whole new visual feast is unveiled.

It was lucky that I had gone out on my own. I spent two hours playing with different lenses, apertures, and shutter speeds etc. Towards the end of my walk I spot a huge red super moon and try to capture the new ancient wall, the modern tower blocks and the Asian full moon all in one shot. I have no idea how it will turn out but it reminds me how much I still have to learn about my camera. Am I boring you yet? That’s why I went out on my own. 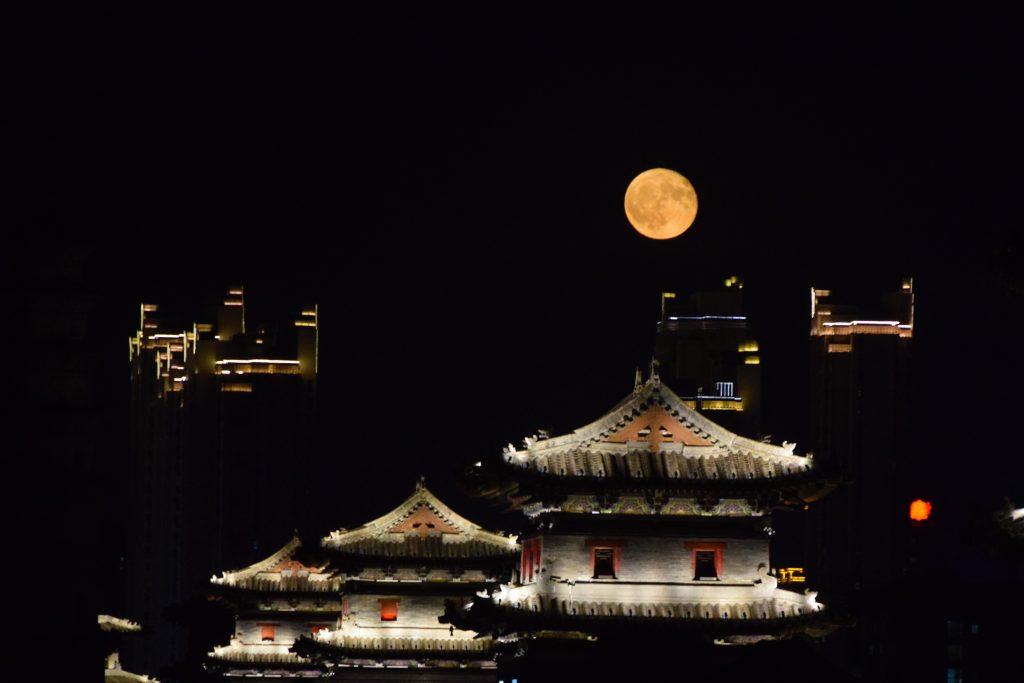 Then I check out the pub to see if there is anyone I know in there. There is.

When we get back to the hotel good old CNN keeps us abreast of what is going on in the world. Apparently, due to Asian Swine Flu the government have opened up the big freezer to keep supplies of pork in the shops. This might explain the abundance of pork related dishes for lunch.

Also in the news is the story that Churchill’s solid gold bog has been nicked from a museum. I check out our bathroom to make sure our heated toilet, with automatic flush and bidet is still there.