Time to move on from Beijing.

When we got back on Friday a note had been left in the room advising us Tiananmen Square would be shut for a rehearsal for the celebrations around the seventieth anniversary of the Peoples Republic.  As a result traffic chaos would ensue. We e-mailed the tour company this info, so they decided to pick us up from the hotel four hours earlier than originally planned. Very organised we thought. Till we realised the hotel was only a five minute drive from the railway station.

It took us a while but we eventually found a nice park to chill in for four hours. We sat in a very pleasant pagoda and were entertained by a lady playing a Chinese violiny looking thing. The presence of a cheap off licence and a sit down toilet meant it was actually nicer, and cheaper, than bar street. 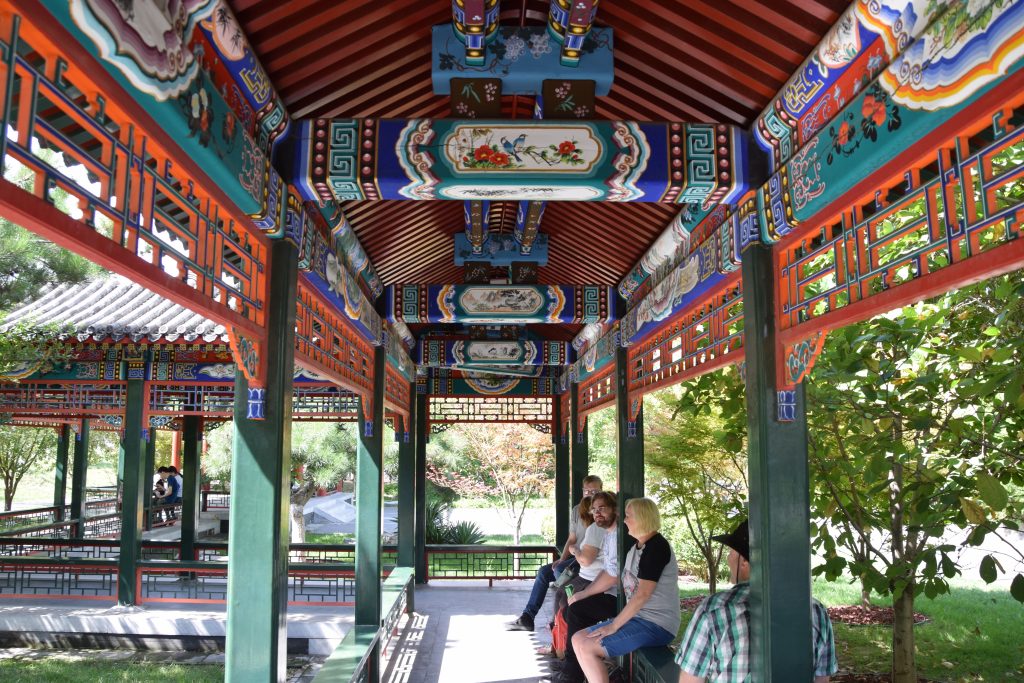 Jim Bob also made an appearance to help us while away the hours.

Eventually we threw ourselves into the chaos of Beijing railway station.  A seething mass of humanity all speaking an alien language with signs that don’t resemble words as we European’s recognise.  One has to take a leap of faith in these situations, otherwise you would become a nervous wreck.

In fairness, when it was time to board we had to walk along a bridge over all the platforms.  All the stairs down to the platforms were blocked except the one we needed. We wouldn’t be allowed to get on the wrong train.

Although the itinerary said fast train, the legendary ‘Bullet‘ train it was not. After a little research we realised it would take six hours to travel just two hundred miles. We suspect the rickshaw dude from the other day might have been pulling it.

It’s a long time since I’ve been on a sleeper train. Pre-EU in fact. Inter-rail as a callow youth. I remember it was pre-EU because we were woken up by boarder guards to show our passports every time we entered a new country.

It was a bit of an adventure being back in a sleeper.  But as we would be on the train from 3pm to 9pm, we weren’t actually going to be sleeping. Six into four doesn’t go, so it was a combination of cramming into one carriage, standing in the corridor (the slowest corridor in the world) and snuggling up with Jim Bob from Carter.

Twenty minutes into the journey three police officers marched into our bedroom and rummaged through the laptop bag of one of our unfortunate Chinese travelling companions. They then proceeded to beat him about the head with sticks. Ok. Some of that was made up, but on a journey like this the imagination can run wild. I don’t even know if they were coppers or ticket collectors.  The uniforms are very confusing.  You can’t tell SWAT from traffic wardens in China.

Eventually the scenery became majestic as we rolled through the mountains.  But due to the magnificence and spectacular ness of the mountains we also spent lots of time going through tunnels.

I settle down to what I think might be the longest reading session of my life, five plus hours in a bedroom full of strangers.  The rest of the gang are next door talking bollocks. I am in a bed next to Eve from the popular television crime series, ‘Killing Eve’.  Is that racist? No. I don’t think it is. It would be racist if I said all the women looked like Eve. They don’t. But the one in bed next to me is the spit of her. I just hope no mad Russian assassins come in to kill her in creative ways. Not before I finish my book anyway.

Actually.  That might liven this blog up if it does happen. I’ll keep one eye open.

With an hour of the journey left to go the guy that had spent most of the trip selling fruit and beer decided to roll up the carpet in the corridor.  It was the full length of the train and the roll was getting quite big as he struggled past our bedroom. Perhaps this was to avoid getting blood on it when the Russian assassin arrived. Maybe this was to be murder on the Datong Express.

On arrival at Datong we are greeted by our guide for our stay, Lucas. He has recently moved back to the area after living in Alabama for twelve years. He is impressed with the hotel we have chosen. We shrug it off. Till we arrive.

All the rooms face in to each other, around a huge ball room. 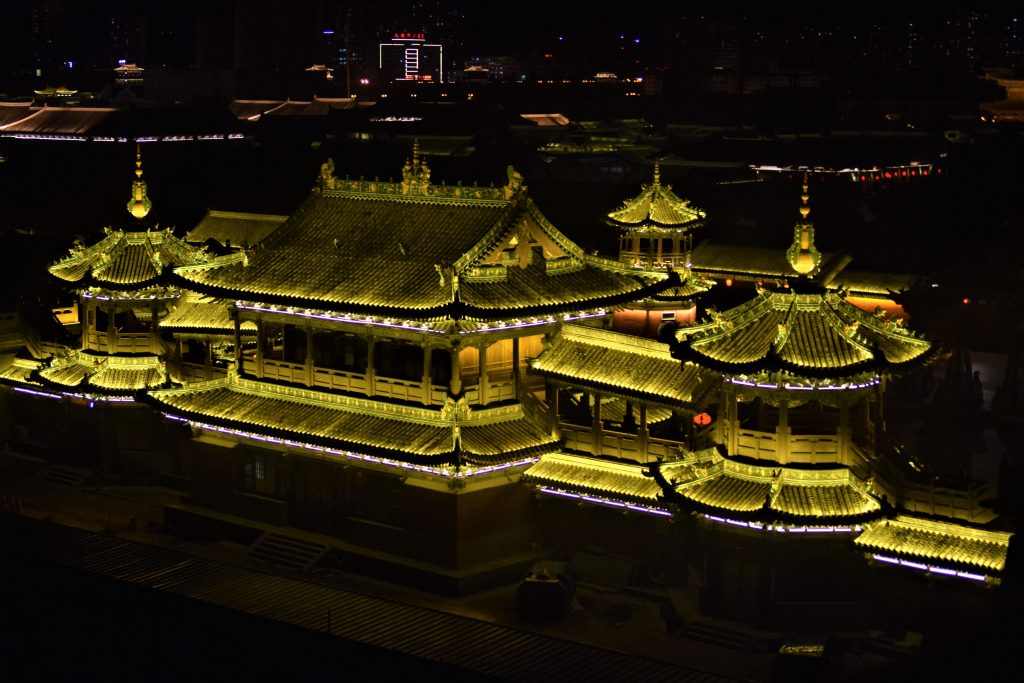 The taps in the bathroom are gold plated and – wait for it – you can adjust the temperature of the bog seat.

We don’t have time to avail ourselves of the facilities though. Rumour has it there are pubs in town. Within ten minutes we find ourselves making our way into the attic (no seats downstairs). There’s not a lot of room upstairs and we have to duck whilst sat down.

The youth wing are sent to the bar and fail miserably to order beers. (One bloody job). Some Germans step in and translate. Beer then begins to flow. Well, trickle is probably more an appropriate description, given our knackered ness.

But soon we have to retire.