Dropping like flies now. Only two of us make it for today’s temple session.  Excessive templing and late night drinking taking its toll.

Today’s temple is a short walk from the guest house. It is Taoist so slightly different from most of the others. There was one display that stood out from everything else we had seen all week. It included Horseface and Cowhead, the Chinese ‘reapers’ that did the bidding of the Eight Judges. Next door there was a graphic display of dudes being disembowelled, having their tongues  cut off and being hung upside down and sliced in half from the groin down . I’m gueesing this is not supposed to be heaven.

I ask Lucas about congregations and all that sort of stuff. Even the largest temples here only have room for a handful of people at a time.  He advises me that, despite the strong community spirit that runs through Chinese culture, they worship as individuals.  Sunday mass is not a thing here. This is a disadvantage in terms of the community spirit but from this heathens point of view it reduces the power of the church to tell people how to think.

We then go for a walk along the old city walls, which date back three thousand years, although something tells me they have been restored a little more recently than that. From our vantage point we can see right across the old city, with all the buildings contained being single storey. 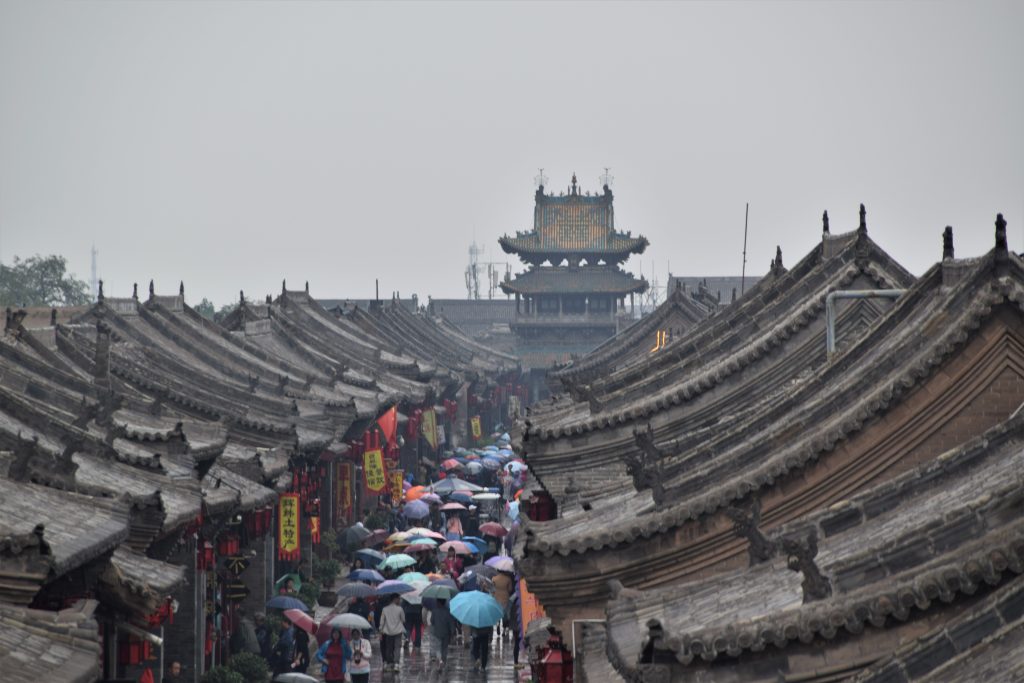 Despite the city walls, the city was occupied during the second world ear for eight years. Ruthlessly.  As the Japanese did everything back then.

On the city wall there are statues of blokes doing the sort thing defenders of a city do. There is also a statue of a scholar. It occurs to me that we have seen very few images of Confucius, which is odd because his legacy lives on in Chinese culture today. Apparently, Lucas informs me, Mao had them all destroyed in the cultural revolution because too many people were using their own interpretation of Confucius to challenge the principles of the people’s republic. 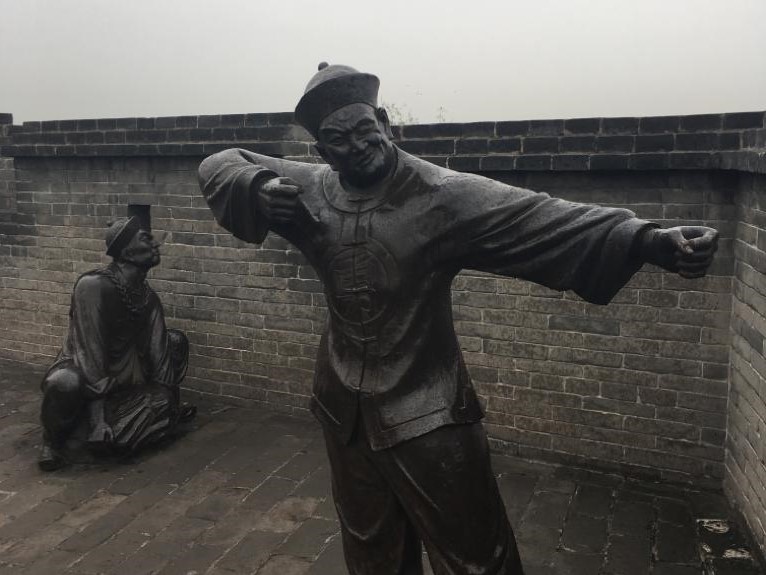 The more I learn about culture here the more questions I have. Buddhism, Confucianism and Maoism, as I understand them, contradict each other in many ways, but many people appear to hold all three in high esteem at the same time.

On the subject of culture, as we are on the wall I hear stirring martial drumming. It’s difficult to work out where it is coming from, but it’s certainly not bland and it does transcend cultures. It’s got balls. Although it is not contemporary, it is evidence that they can rock when they want to. I am more determined to find their answer to the Stone Roses or Pink Floyd.

After checking out of the wonderful guest house we are treated to the best meal of the trip do far. Yes, even better than yesterday. No doubt a contributory factor in this improvement is Lucas’s attention to detail and observation of what we like and don’t like. The veggie options are pretty much obliterated.

We all have a bit of a ‘moment ‘. This is our last day with Lucas. He has been a major part of the last few days and has become a friend we will never forget. Offers are made of a place to stay in Wales and we list all the things he has done wrong. We are from the valley’s, we have got to keep his feet on the ground.

We head for the railway station, our leader gets pulled for having a dangerous weapon in her suitcase. Bang goes our peanut butter sandwiches.

The station fits in with the Chinese mentality of forward planning. It is way bigger than it needs to be for a station that only has three trains an hour. Unlike UK train stations where everyone piles on the platform and Hope’s they end up on the right train, they have large waiting rooms and you are only allowed on the platform when your train is due. Once you have got used to the system it makes perfect sense – it gets more complicated with busier stations, but it still works.

I ask Lucas why it took us six hours to travel two hundred miles earlier in the week. Apparently the slow trains are something to be cherished, as they are being phased out. Today we are on the 240km/hr fast train. 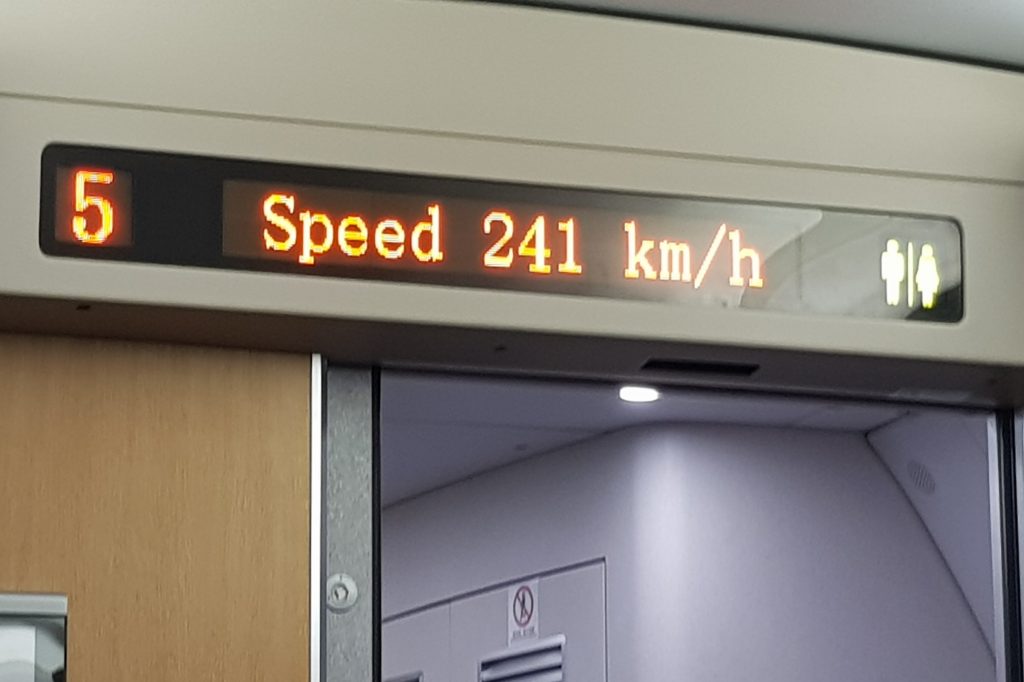 We are spared the indignity of our faces flapping about like they do on Top Gear when driving really fast. In fact we seems to be spared most of the effects of being fired like a bullet.  The ride is incredibly smooth.  And safe now that none of our fellow passengers are carrying deadly butter knives.

Through the ever present fog we can see that we are racing through mile after mile of agricultural land. They clearly don’t like farming on a slope because all hills are terraced to create flat where once there was gradient. Yet another example of Chinese dominance over mater nature. There is nothing ‘wild’ to be seen. For as far as the eye can see for the three hundred miles of our journey every thing is cultivated. The scale of it is impressive to say the least. But one cannot help but wonder about the impact on the environment in terms of fertiliser, pesticides and the displacement and control of wild life.

At one point we lose sight of the crops as we see a huge expanse of poly tunnels, looking like a surreal polythene tundra.

The area was remarkably free of temples or gift shops.

The headphones come out and Ed Wynne’s ‘Shimmer Into Nature’ seems like an appropriate sound track. As the great dimmer switch in the sky is turned down I try to simultaneously review Ed’s first album and re read Steve Lamacq’s ‘Going Deaf for a Living’.

On arrival at Xian, our new guide, Timo is waiting at the gate. Introductions are made and it is instantly clear that Timo is friendly, efficient and has a brilliant grasp of English.  We are introduced to our driver, Mr Hu and whisked off to another luxury hotel.

The rooms are immaculate, but it takes a while to get our head around the bathroom.  Glass bog door and a bizarre window looking in from the bedroom into the shower are strange, but we eventually work out the system of sliding walls and blinds to achieve some modesty.

The youth wing head for the bar, like the young bulls that they are. I opt for a shower, complimentary coffee and feet up with Lamaq. With a big day ahead I want to be fresh in the morning. By midnight the youth are in bed with a trail of zzzzzzzzs floating up to the ceiling.  I stay up with Lamaq till gone one am. So much for my early night.