Day one of a trip to Poland to watch Wales away.

*All names changed to protect the guilty

Flying at 7am doesn’t sound too bad. It is not excessively early and it means you arrive early enough to have at least half a day in country. But then factor in that you have to be there two hours before the flight, and it takes an hour to get to the airport and we are soon in the realms of not much point going to bed.

At least it is Cardiff Airport, not Bristol or Manchester or one to them there London ones. Flying from Cardiff is civilised. It is not too far, and it is not a massive airport that you can get lost in. The big drawback is that it has limited destinations to fly to and not many airlines operate from there. It is improving, because it has been bought by the Welsh government, but not at a particularly fast pace.

In normal circumstances you wouldn’t be able to fly to Wroclaw from here, but this is Wonky Sheep, they have chartered a flight just for us (and several hundred other Wales fans). (See previous blog for a rant about the change of dates)

Dutifully arriving two hours before take off, we find that the flight is at least an hour late. it is too early in the trip to get wound up though. We look around the queue, shouting to mates we haven’t seen for a while and nodding to faces we have seen a hundred times but not got around to talking to.

Eventually the river of bucket hats and replica wales tops flows through the check in and pours into the departure lounge. Via the duty free. It is impossible to avoid duty free in Cardiff. You cant walk around it, under it or over it, you have to go through it. I hate in your face sales techniques. I refuse to even look at the tax free gifts on offer.

I’m not sure if there is a law that says you must have a pint before getting on a plane, but just in case, we do, to ensure we are not arrested by the holiday police. It is here that I find out that our little posse is bigger than I had thought.

It started out so simple.  Me and Becks off to Poland on a Wonky Sheep trip to watch Wales.

Then EUFA and FIFA decided to balls everything up, again, and totally rearrange the fixture list.  Date of game changed. Luckily,  we had booked through Wonky Sheep,  so it was up to them to change flights, hotels and shit.

This meant Posh and Sporty Spice were free to join us. Dim problemo.

Then with 48 hours to go, Sporty Spice books J on the trip, completely rearranging the sleeping arrangements.  Suddenly I’m in a room of my own. So be it. At least I can listen to whatever music I like.

When we go to pick up Sporty and J, I discover that J is only fifteen years old. I’m not sure, so I have to ask. It turns out that J is Sporty’s nephew, not her fella.

In the departure lounge I discover that there are two more in our gang. In fairness, Posh had forgotten as well, so she wasn’t keeping secrets, just forgetful. We are joined by Uncle Albert and Nosferatu.

Whilst in the bar Albert recalls an anecdote from a trip to watch Wales in Russia that involved a lap dancing club, vodka and climbing up a wall. Hence Albert will be referred to from here on in as Spiderman – one of those stupid repetitive ‘in-jokes’ that make no sense to outsiders but has those in the know sporadically giggling for the duration of the trip.

Six hundred words in and we haven’t even left the departure lounge. So fast forward two hours and one thousand miles and we are seamlessly deposited  by the admirably organised Wonky bus outside out hotel.

The last-minute shuffle of rooms meant I was in a different hotel from the rest of the gang. In theory. The reality was slightly different. The Novotel (4*) is in the same building as the Ibis (3*). They share the same lift, same car park, same staff and even the same check-in. the only difference I could make out was they had different breakfast areas. The Tories in the Novotel used the restaurant, whilst us working class dudes ate in a separate café.

Once it had been explained that I was not a fifteen-year-old staying in a room on my own, I was handed the keys to my own room. A twin room – with two beds, so if I shit the one, I would have a spare. Then after a quick freshen up the gang gathered in the bar ready to begin our adventure.

We didn’t get very far.  A few hundred yards from the hotel was a viaduct, under which there was a series of arches, each filled with either a bar, restaurant, or sex shop. We walked down the line checking them all out, before deciding on a bar with a pizza shop next to it. We ordered beers and ordered pizza from next door.

There was no need to hang around to wait for the food, we were given little pager thingys that went off when the food was ready. And when it arrived it was nothing short of amazing. Considering it was only a takeaway, it was like a proper pizza from a proper Italian restaurant. With the pub selling Polish Cyder, and the weather still being warm late at night, we had our own little corner of heaven.

Eventually we started thinking abut moving on to see the rest of the town. As it happens, this coincided with us noticing one of the gang having, like the Queen, episodic mobility issues. Just like God, he was moving in mysterious ways. We weren’t the only ones to notice it though. The barmaid had noticed and was making Polish hand gestures that suggested if we did not sort him out, she was going to chuck him out. Sometimes, you don’t need to be able to speak the same language.

We walked him to the end of the street and pointed him in the direction of the hotel. Then spent the rest of the night criticising the person that had invited him for not walking him back to the hotel. He made it home ok though because he was down for breakfast the next day, chatting with a stranger that helped him get out of the lift.

Whilst drunken friend was making his way back to the ranch, we were heading into town.

The Market Square, Wrocław dates back to 1232 and is one of the largest market squares in Europe. Whilst it is a square, it does not have a large open space in the middle like most old squares. Smack in the middle are the largest two city halls in the country, along with several pubs and restaurants. 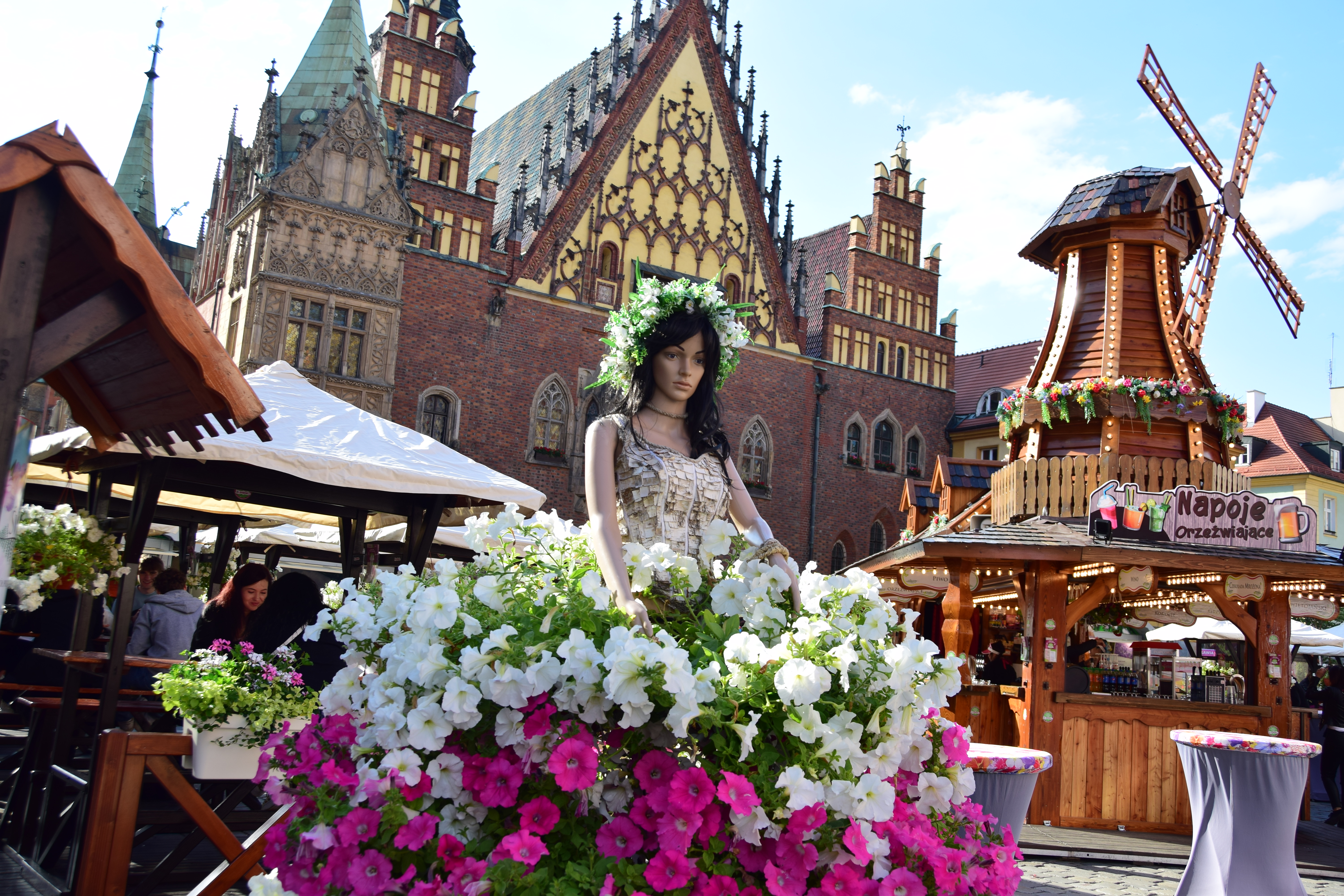 Although damaged by bombing during World War Two, most of the buildings remained intact and were carefully restored. The ring around the square was pedestrianised at the start of the century.

The first thing we see as we walk into the square are market stalls resembling a stereotypical European Christmas market – but without the Christmas. A variety of food, drink and fridge magnets are on display. My eye is caught by a stall selling ‘chocolate kebabs’. A range of things skewered on a stick and covered in chocolate. I opt for grapes and cheese covered in dark chocolate.

Inevitably the square is where most of the Welsh fans already in town are gathering. There aren’t as many as you would normally expect because of the change of date. Many are still booked on to the original flights and will be running from the airport to the game. Many are stuck in UK airports having to deal with cancelled flights and delays that seem to be the order of the day since Covid.

We do a slow lap of the square trying to suss out the best-looking option for a drink, ruling out the Irish Bar and the Hard Rock Café. Why fly all the way to Poland and then go to an Irish Bar? I just don’t get it, for me a major point of an away trip is to sample local cultures, cuisines and beers. I do get that they can become rowdy atmospheric places with lots of singing and camaraderie, especially on match day, but I can’t be spending the whole trip in them.

Our lap of the square is slow because we are already starting to bump into old faces from home, catching up, discussing travel arrangements and comparing notes on where to eat and drink. We start to hear rumours of a pub that does been at a pound a pint.

We find ourselves a nice little pub with external seating and order beers. It looks like all beers come with pretzels, whether you want them or not. Most of the gang leave them, but I devour mine. And theirs. And those left by the guys on the next table we make friends with. 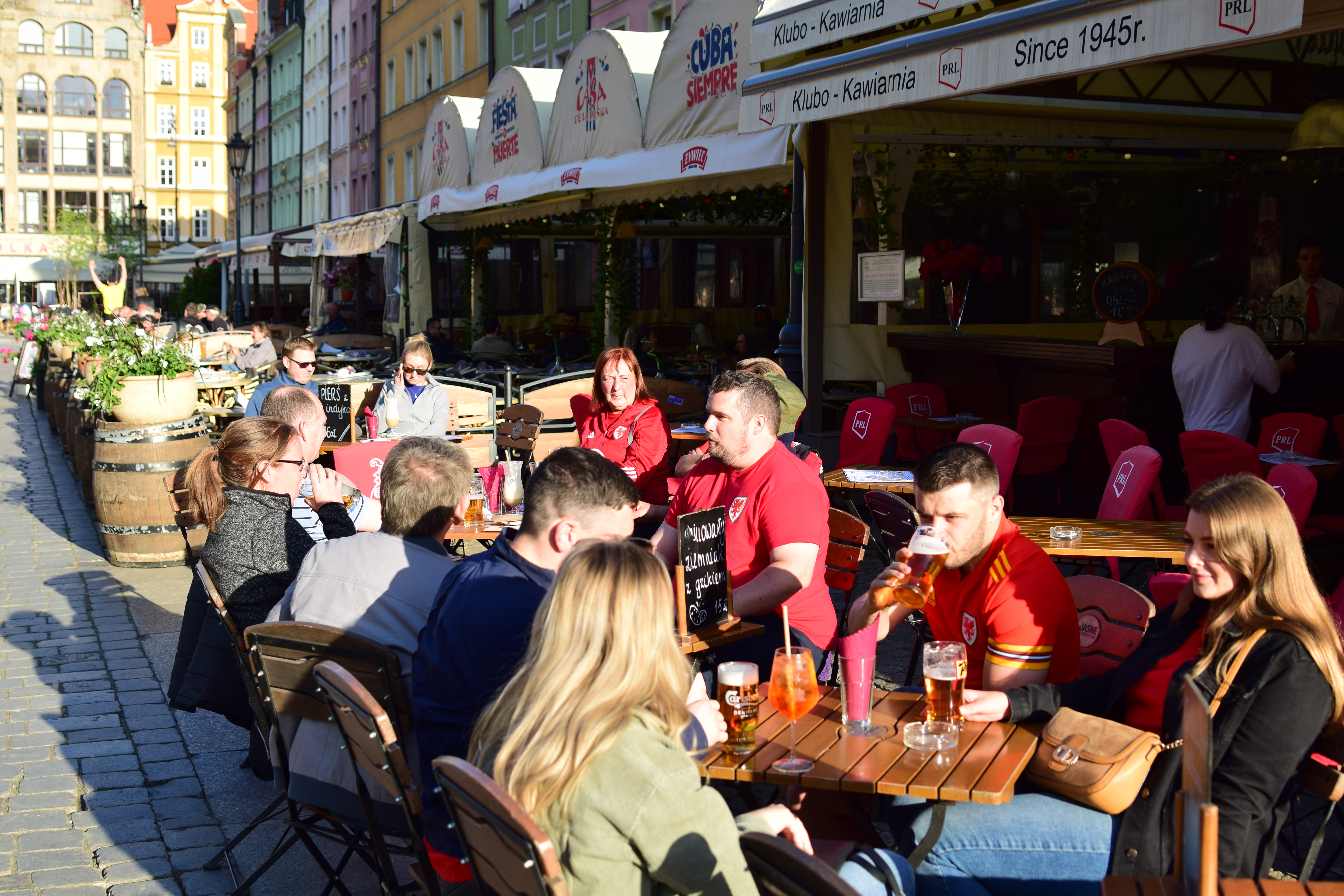 It is table service, so we don’t need to go in till the inevitable toilet break cannot be avoided. Inside the building is glorious, decadently decorated with lots of wooden panels reflecting a time long gone, but also lots of framed photographs of communist leaders, from Lenin and Trotsky, to Mao and Guevara. Numerous others that I do not recognise, presumably Polish leaders of he past. Even the urinals have stencilled communist portraits next to them. I’m not sure if this is a homage or an insult.

This is the only reference to the former Soviet Union I note on the trip. It seems odd, given that only thirty years ago, Poland was at the heart of the communist empire, almost all traces of it are now gone, washed away by the tide of capitalism. In fairness though, Poland was where the first cracks started appearing, with the Solidarnosc union in the Gdansk docks kicking back against the Russian Bear. Not long after, the Berlin Wall had fallen, and the world changed forever.

Posh and Becks decide to retire for the night, and those of us still standing decide to explore. We soon bump into some lads from North Wales who have found the mythical pound a pint pub and follow them off the square and down the steps into the cellar bar.

Przybij Piątaka is a cool little pub with a nice selection of rock music being played over the PA. Interesting rock from the sixties and seventies, Cream, Yardbirds, Zeppelin the Doors etc. I can’t help thinking it is probably better than the music they are likely to be playing in the Hard Rock Café. The staff are friendly and a round of four drinks costs roughly the equivalent of three quid.

We settle into the corner with the lads from North Wales and drink into the wee small hours. Eventually though, the stupid o’clock morning flight is catching up with us and we have to head home. This is a late night pub though so as we head out the door, lots of young locals are just arriving, presumably after being chucked out of the other pubs. 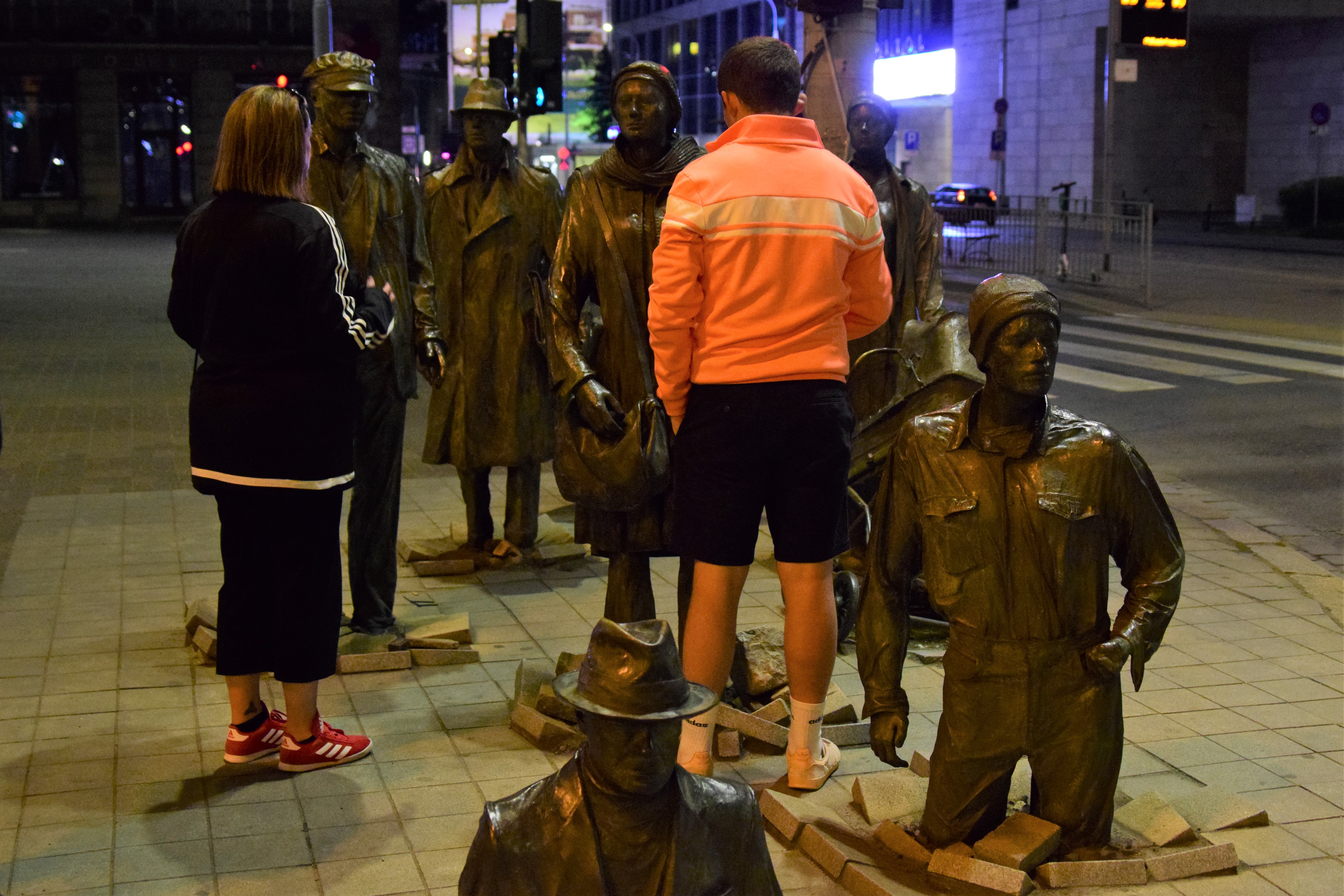 On our way home we pass, for the second time, statues of people walking into the ground on one side of a road then back out on the other side of the road. When we had passed it earlier we had admired the artistry of it. Now, we are contemplating the meaning of it. Some good guesses are made. I resolve to look it up when I’m sober.

Then, as Zebedee said, time for bed.