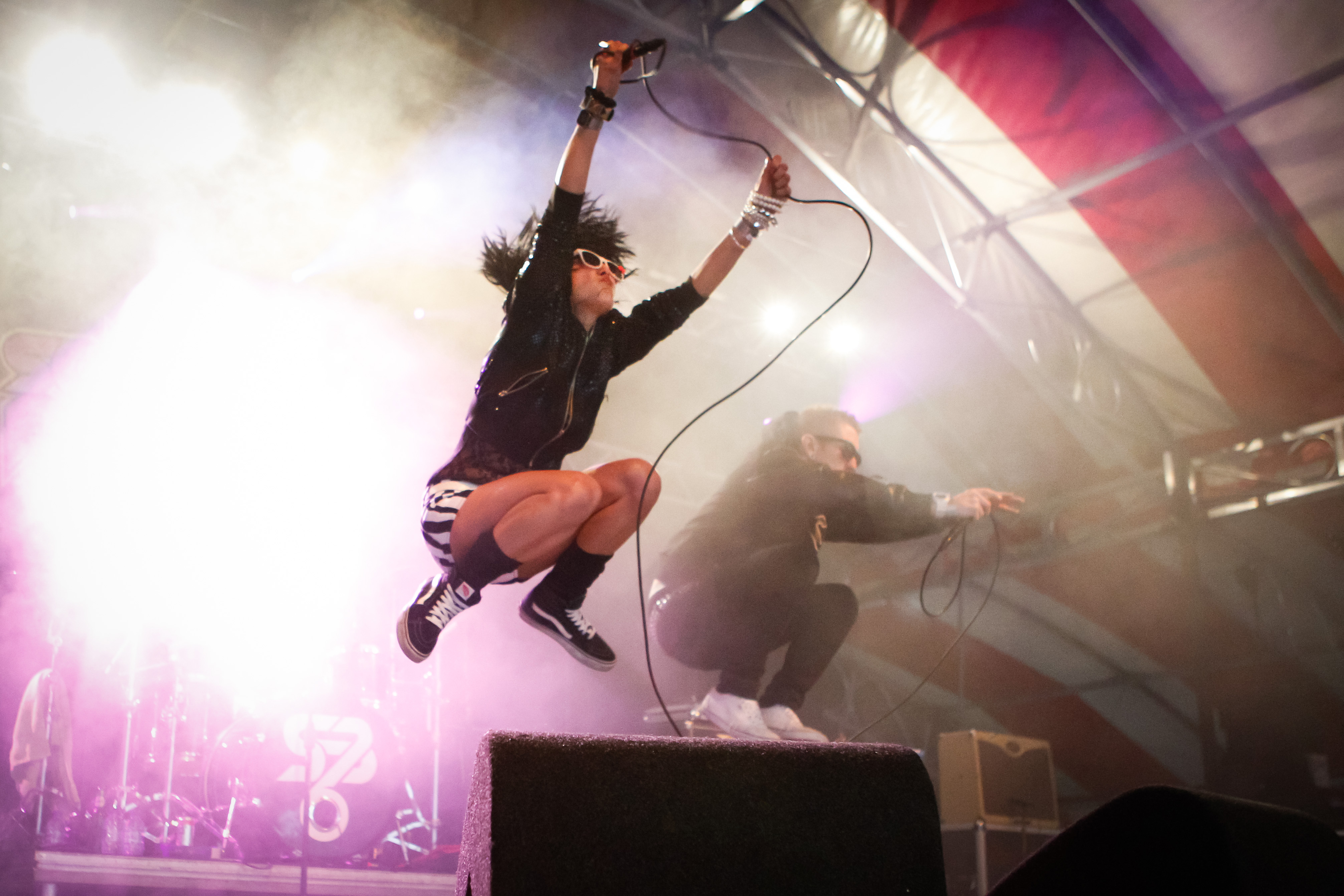 All scenes need a kick up the arse and an injection of something fresh every now and again. The DIY punk scene is no exception and Manchester’s Sonic Boom Six have been doing just that in recent years, bringing samplers, rapping and hip hop into the ska-punk mix.

We caught up with Barney Boom for a chat when they played the Meze Bar in Newport.

“Laila, Neil and myself had been in a ska punk band in Manchester”, Barney tells us of their origins. “Being into dance music as well, being in a ska punk band did not really do it for us so we split. I was doing a recording project, recording some of my own songs. I wanted to do all different styles but have the same band doing it. Laila came in, we got Ben in to play saxophone and we enjoyed it. We recorded a demo and sent it off to a few people. It was never meant to be anything, we were just playing around, but it seemed people liked the demo and we started getting offered gigs.”

We wondered how the SB6 blend came about. “We were going to parties and we wanted to reflect what we were hearing, not just punk and ska but hip hop and jungle and all the other stuff”. A pretty ambitious mix, is there anything they would not throw in the melting pot though? “Cos Laila is Asian we wanted to get some Bhangarh in there somewhere, mixing it with UK street music was really interesting to us, but none of us were really passionate about it, so it was a good idea, which might come back but at the moment we are going to leave it on the shelf. Punk rock Bhangarh is ripe for someone to do, but not us. We try to keep our finger on the pulse the way the Clash did, any genre is welcome, but we know what we are good at.” 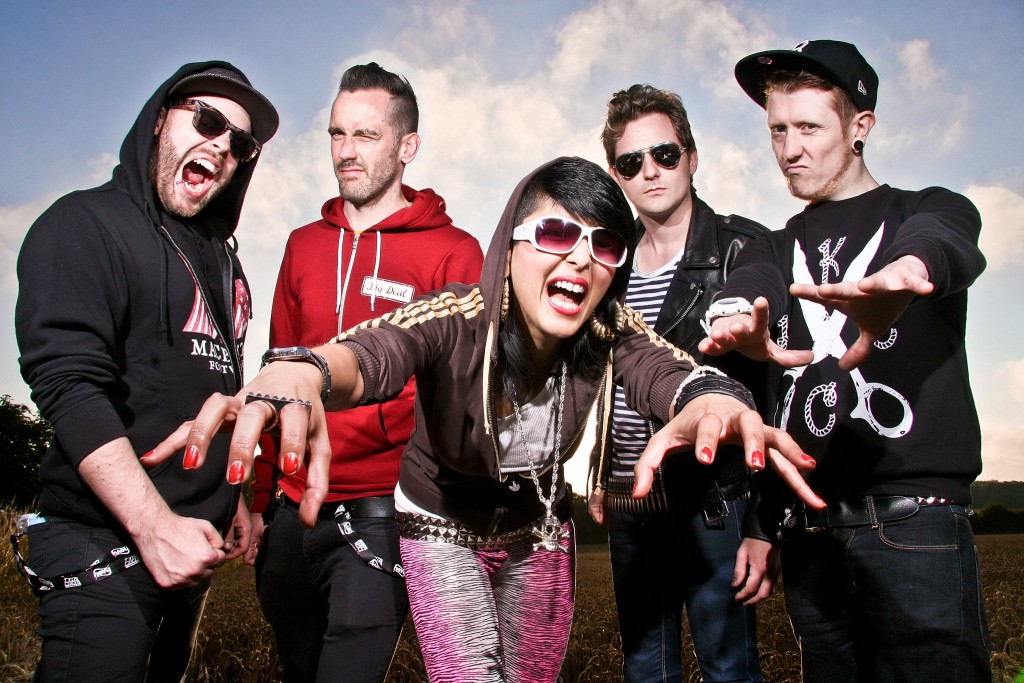 Everything is comparative, but to us here at the Iguana SB6 are young whippersnappers. We were into punk cos that was ‘our time’, but SB6 were not even born then. “I can hear what is my interpretation of punk in a lot of different styles of music. I am attracted to the idea and the ideology. I like loud guitars but I find metal to melodramatic, I find indie too conventional, the energy behind punk and ska is inspiring. I like the idea of alternatives and looking for something new. The status quo is not for me. I got into hip-hop and dance in me twenties but I came back to punk cos that is what I am really all about. Punk is shorthand for independence, rebellion and sticking two fingers up to the man”.

Following releases on Moon Ska Europe and Deck Cheese the band eventually decided to release their own material on their own rebel Alliance imprint “We got to a point with Deck Cheese where we were not selling many records. They were not going to invest the amount we needed invested to get to a bigger place. We wanted to take control, we knew we had a fan base and a big Internet presence, so it was quite easy, we just need to convince a distributor, we told them what we and done and they said yes. Ultimately it goes through the same distributor as moon ska so it’s really not that much different, just cheaper. It was the right decision cos now our fate is in our own hands. It could have just been a vanity label but we were interested in the idea that bands with a similar outlook could group together. It does not matter if the bands are the same style, we are interested in bands that have something contrary to the popular view on life to have a say, hence the name Rebel Alliance”. 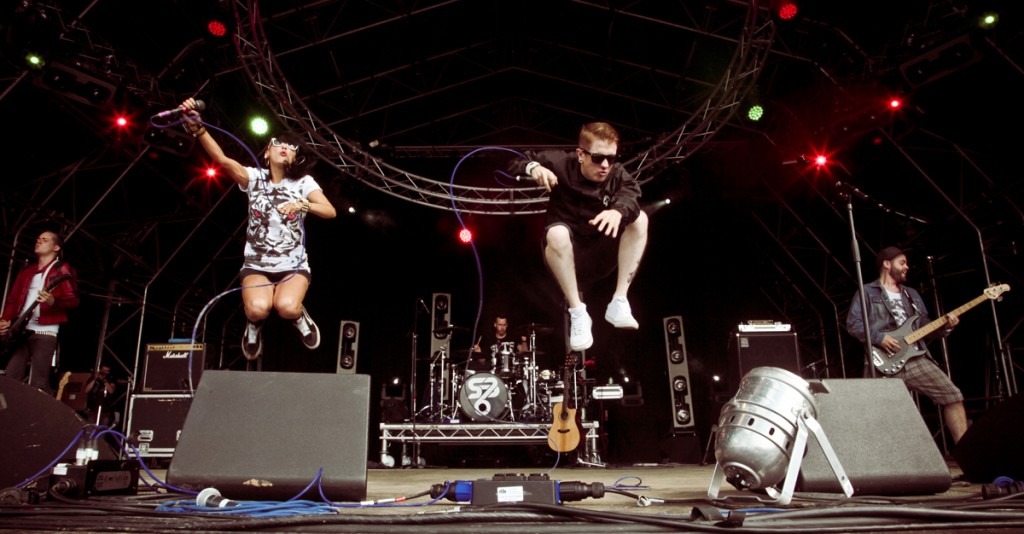 Whilst the label provides a platform for other bands and is a genuinely ‘independent’ entity, they are not precious about it. “We are not religious about DIY, we are just happy to get exposure. There has only been once where we had to say no. We were asked to do a show for a coca cola arts project thing. I will drink coca cola, am only conscious to a certain level, but there is no way were going to promote them cos of the murdering trade unionists thing. Ultimately we are musicians who want to get our music out, who just happen to have a lot of things we want to say. We want to take the band as far as we can go; we want to be an international band. Hopefully we can show that you don’t have to be a trendy band to be successful, you can make a career and still be rooted in the DIY punk scene. If a major came along that would let us have total control of what we did we would sign, but that aint going to happen.”

Not being on a major label has not held them back though. “We played a big punk all day thing in Leeds with Reel Big Fish headlining. Their merch guy really liked us and somehow Laila got up and did the duet thing they do and they really liked us. So they invited us on tour. We have played with the Mad Caddies, Less Than Jake, Bad Brains and so on. It has always been through someone being aware of who we are.”

If being in a band and running your own label is not enough, SB6 also do shows under the guise of Babyboom. “After we finished the Rough Guide CD we had a few traditional ska tunes left over. At the time I thought we were going to use them with the main band but we decided to set up an acoustic reggae thing as a side project. 70% of the material we play is unique to Babyboom. We do a lot of fund raisers and stuff cos, for instance, if we are playing Liverpool on a major tour and play at the Academy then we cant really do a benefit gig in Liverpool the week before, no matter how much we want to do that, so if we do Babyboom the promoter wont know so we go and do it. Sometime it is a case of people want to book Sonic Boom Six and they don’t want to pay us so they try to book baby boom, but we do a lot of charity and benefit gigs for causes we support. There have been a few times where people have booked baby boom and we have turned up and done an SB6 set, but it is just a way of getting around things and not upsetting people”. 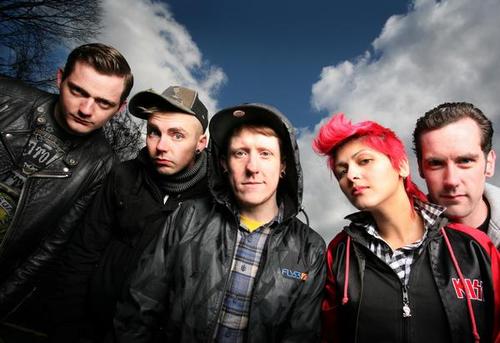 And there’s more. On top of all this they are involved with the Suicide Bid collective; a collaboration project knocking out dubby-ska-punk involving members of P.A.I.N. Inner Terrestrials, King Blues, The Fillaments, King Prawn, Ex-Cathedra, The Foamers, Deathskulls, Black Radio and The Ambition. “ Well we have known John from the Fillaments for ages. In the early days of Sonic Boom Six we gigged together a lot. He clearly enjoyed what we do. He just got in touch and asked Laila to do a bit of rapping on one tune he had in mind, it was for the second album, We said yeah, no problem; if there is anything else we can do for you get in touch. The demo bounced back and forth between us, we gave them some constructive criticism, they agreed with what we were saying and the tune eventually became Give It Up on the second album. He really liked what we had done so we have been doing a bit with each other since. It’s a nice organic thing, it involves loads of bands we have played with and toured with in the past. It’s a nice mix of hardcore firebrand types with a lot of integrity like Inner terrestrials and more left field experimental stuff like ourselves. It’s a nice snap shot of what is going on in the UK at the moment.”

There is no doubt this band are going to go on to be bigger than your average DIY band, they have already played on the main stage at several big festivals. Yet their down to earth attitude means that are likely to carry on playing little gigs as well … In one form or another!