And so it was, that on 22nd October, the 40th anniversary of the release of New Rose by the Damned, the first ever punk single, SHAT (Socialist Hikers + Anarchist Treckers) were up at the crack of noon for a wander around Cardiff Bay.

It started well, with the ‘11am by the fountainy mirror thing opposite the Millennium Centre’ start drifting on to an 11:30 start. Needless to say it was the youngest and fittest of the crew that were late.

The old folks that arrived on time, were well prepared and all kitted out for the walk and post walk drink (well, the drink) in their finest goth, punk and mod gear. There were even two of us that did not have bad backs or dodgy feet!

It is difficult to overstate Cardiff Bay’s place in history. The valleys were at the heart of the industrial revolution. They produced the best coal and steel in the world and the first steam train in the world ever to use tracks was used to transport steel from Merthyr Tydfil. But all of this coal and steel needed to be exported, so the Docks in Cardiff became one of the busiest in the world.

The first million pound cheque ever signed was signed in the old Coal Exchange and the railway station in the bay is the oldest surviving passenger station in the world.

Needless to say, around this grew a vibrant multicultural community and Bute Street became infamous throughout the world.

It’s worth knowing this, because the Bay’s past has almost been wiped out. Following the destruction of heavy industry in the valleys by ‘she who shall not be named’ (Maggie Thatcher) (not that I am bitter) the docks inevitably declined in parallel. These days it has all been gentrified and is a mix of tacky wine bars, restaurants and yuppie flats.

Our first taste of the bay as we arrive is the railway station. The building is thought to have been designed by Isambard Kingdom Brunel and was built as the headquarters of the Taff Vale Railway in 1842-43. It became home to the first steam-powered railway in Wales and played a vital role in linking the coalfields of the south Wales valleys with Cardiff Docks.

However, when the The Victorian Society published its annual list of the most at-risk Victorian and Edwardian buildings in England and Wales earlier this year, the station was the only Welsh building in the top ten. It is, as we say in the valleys, hanging. When you consider this will be the first thing may people who come to the bay will see, it frankly beggars belief. 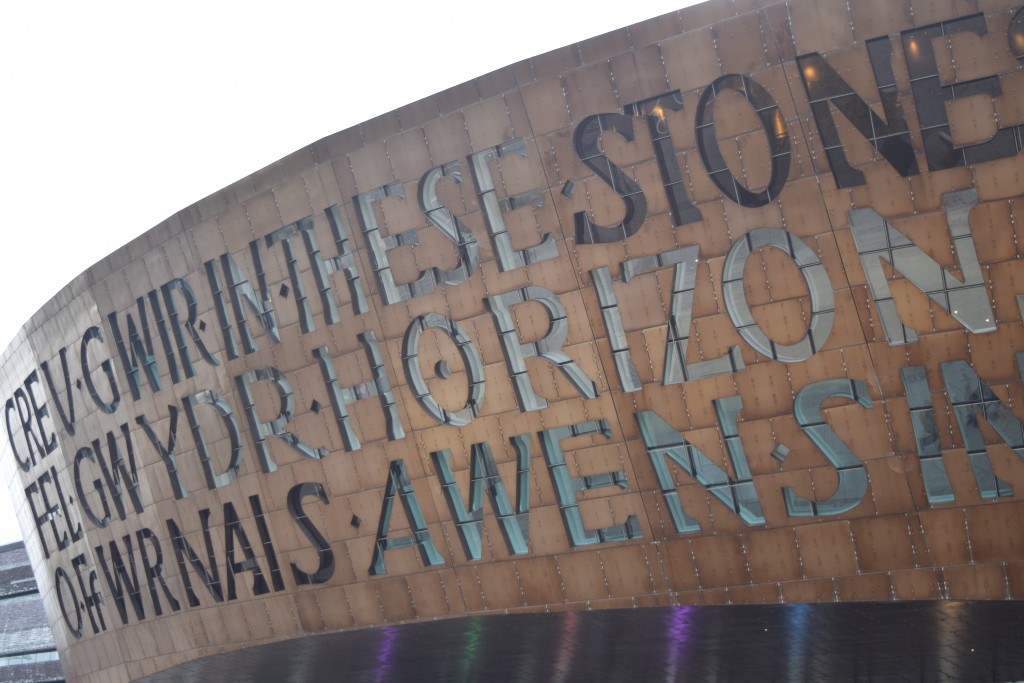 Our meeting point, outside the Millennium Centre is a little better maintained, but then it is comparatively new. The majestic arts centre only opened its doors in 2004.

Anyway – before this turns into a cut and paste from Wikipedia, the walk.

After we decided that the youngsters were not going to turn up we headed off past the Senedd, home of the National Assembly for Wales. An impressive building in terms of its sustainability and innovative constriction, but a pretty ugly monstrosity. Beauty is in the eye of the beholder and all that, but anyone blessed with the gift of sight would be struggling to behold any beauty here.

We then walked past the Dr Who Experience, which may indeed be an incredible experience, but at fifteen quid a pop to get in, this blogger will never know.

Then on to the highlight of the walk, the barrage that makes the bay what it is. A bay.

Just as we get to the barrage the sleepy heads of the SHAT youth wing finally catch up with us.

Seven years in the making, the controversial barrage was completed in 2001 and has turned what used to be the link between the industrial heartlands of South Wales and the rest of the world into an aquatic pleasure park for the rich (well, the reasonably well off). Miami with its head kicked in if you like.

Strolling along the barrage we have the stormy Bristol Channel on our left and the calm waters of the bay on our right. The youth wing immediately let us down by unleashing the dogs and pointlessly shouting “leave them ducks alone”, as we watch the ducks scatter from the advancing canine.

We joyfully frolic along the barrage taking in the scenery and catching up with what we have all been up to since our last SHAT several months ago.We stop and admire the engineering of the lock that lets boats in and out of the bay, to and from the sea.

Then wander past the Custom House, sharing memories of the ‘proper’ Custom House in town (nudge nudge, wink wink).

Then a stroll through the marina, thinking to ourselves what a pleasant walk this is and marvelling at how we are already half way around.

After the marina, we stroll past some blokes in dinghies going through some rapids. A bit like a posh version of the old Log Flume they used to have in Barry Island Fun Fair.

We then wander past some functional soulless boxes that are what passes for houses these days, then come to the end of a bit of a peninsula thingy. Oddly, the Senedd looks further away than it did when we were by the marina. Perhaps we were not as far around this walk as we thought.

Then more ugly boxes, then boxes on top of boxes and boxes with roof gardens and boxes with shipping containers on top and – more bloody boxes. I suppose it is what turns some people on, but they just look soulless and I suspect any community spirit is short supply in these sorts of neighbourhoods. But we should not be judgemental.

The conversation move around to Formaldehyde and amature taxidermy to lighten the mood a little.

Then we finally leave Lego Land and find ourselves walking across a big fuck off bridge with a dual carriageway on it. This pub does not seem to be getting any closer!

We walk past a wetland nature reserve that is highlighted on the map provided the BBC for ‘Weatherman Walking’ recommendations. Sorry Dereck, we aint got time for that now, all thoughts of soaking up the scenery were drained when we soaked up Lego Land. We just want the pub now.

And finally – we get back to the heart of the bay, walk past all the wine bars and restaurants and head straight to The Packet, the only proper pub left in what was once a thriving port full of dockers and seamen looking to drink heavily and – well do the stuff that sailors and seamen do.

Ciders were bought, feet were put up and an eight hour drinking session began – which included beer, food, wandering around Cardiff to try and find a pub showing Cardiff City on the telly (what’s that all about?) and the purchase of a New Rose off a Romany lady, to commemorate the 40th birthday of punk rock.