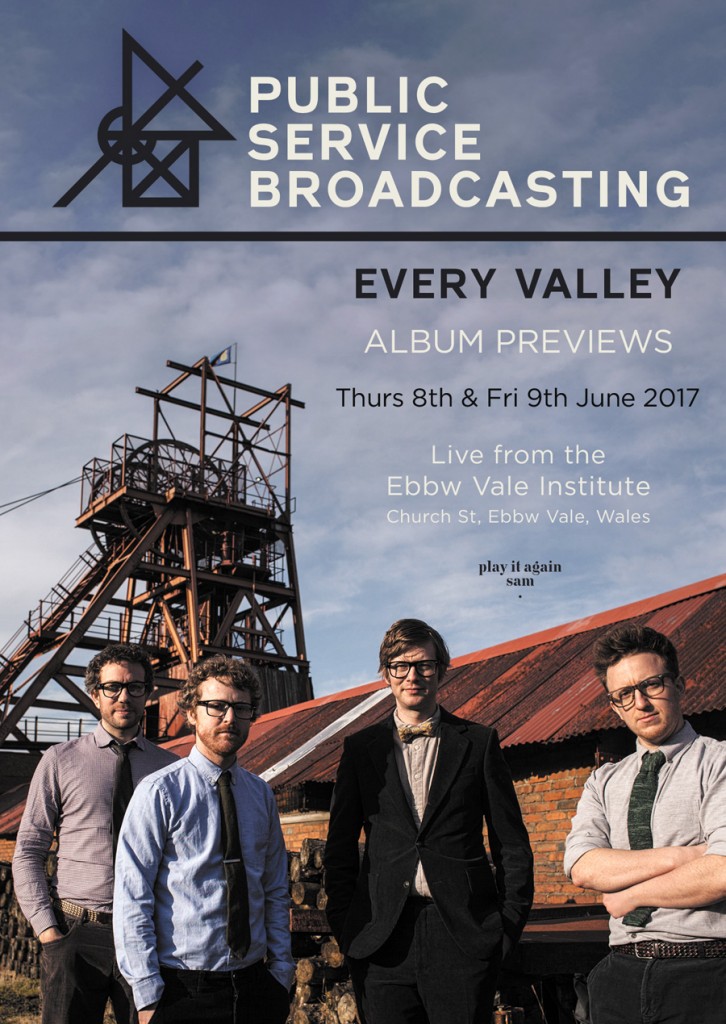 Public Service Broadcasting are to release their third album this summer and will be previewing it with two low key shows in Ebbw Vale, South Wales.

The following statement has been released by the band today:

Our third album is called Every Valley and is a story of industrial decline. It’s centred around coal mining in the UK, and in South Wales in particular, but it’s a story that’s been repeated across the western world and which has particular resonance in today’s political climate.

I have no personal ties to mining, be it coal or otherwise, and I have no family links to the area, but something about the story drew me in. This is an album about community as much as it is about mining; it’s the story of an entire region reliant on one industry, and what happens when that industry dies. What’s certain in my mind is that this album isn’t just about mining, and isn’t just about Wales. It’s a story reflected in abandoned and neglected communities across the western world, and one which has led to the resurgence of a particularly malignant, cynical and calculating brand of politics.

We recorded Every Valley in Ebbw Vale, historically a steelworkers’ town but one surrounded by coal mines, in the former lecture hall of their former workers’ institute. It seemed important to record in the valleys, as I wanted this album to feel connected to the area it was written about in ways our previous albums hadn’t been. I wanted the album to have a rich, earthy, full sound, and to carry some of the lilt and lyricism of the language itself, something embodied by its title, taken from a 1950s transport film. It hints at peaks and troughs, at the strength and solidity of the community, and the geographical reality of the industry.

We’re really looking forward to sharing the album with you – it’ll be out in early July.

Congratulations and commiserations respectively to those of you who managed to get hold of, or missed out on, tickets for our Electric Ballroom show. The link we hinted at is that the EB was the venue for the famous Pits & Perverts fundraiser, as depicted in the film Pride. In our case maybe more Pits & Public Servants, but who knows, things might get lively.

In addition to our London show, we’ll be playing two special album preview gigs in the very room in which the album was recorded. We’ll be playing a selection of new songs – not the full album as, as you’ll hear, some of it is a bit logistically challenging in a small room – and some older favourites.

Tickets will be going on sale at 10am on Friday 24 March from here.

There are only around 200 tickets being released per night and we’ll be making some more tickets available exclusively for local residents nearer the time.

We’ll be playing relatively early to allow people to get trains afterwards (the last train to Cardiff leaves at 10.34pm, so there you go), and there are plenty of accommodation options locally if you’d like to spend a bit more time in the valleys. We’ve put together a small FAQ section here for those who are interested in coming along.

We’ll be announcing an autumn tour in due course, and we’ll be playing a number of festival and other shows over the summer as already advertised. More news, and the video for Progress, will be coming soon. Until then, you can stream the single here for now.