Good King Wenceslas might have liked his deep pan, crisp and even, but in Newport they like their Christmas pizza to be of the tramp variety.

When I was a lad, Newport night life was a little leary,  to put it mildly. It was a place where you went out for a laugh and came home in stitches. Especially if you were a valleys boy looking for adventure in the bright lights of the big city (although back then it was only a town).

For many years it consistently topped the charts of the most violent town/city centre in the UK to go for a night out. Clubbing took on a whole new meaning

After a few attempts at at night’s out, it soon became a place to avoid.

But then it started to have some interesting gigs. It started slowly, with Cheap Sweaty Fun putting on gigs in Stow Hill Labour Club, then after several venue changes, settling on TJs. It then started to snowball,  with other promoters putting on gigs and slowly but surely Newport became a hotbed of musical activity. It was possible to have a good night out without getting your head kicked in after all.

After the closure of TJs a number of venues tried to fill the massive void it left behind but it wasnt until the arrival of Le Pub that something properly clicked. Once again there was a venue that was organic, welcoming and was attracting pretty damn decent bands.

And it is catching. That end of town has taken on a much more laid back funky vibe to it, with several other venues putting on live bands and selling decent beers.

Black Friday (the original Christmas drinking one, not the on line shopping one) can be hard work anywhere.  But the idea of Black Friday in Newport is particularly unattractive to little old me. But hey, Pizzatramp are playing Le Pub.

On arrival at the venue it is unexpectedly quiet. But in an age of 4am stop taps, people tend to come out later – ot so I am told.

The whole reason for us going to the ‘Port was to go to a gig, which generally involves watching live bands. There are four bands on the bill tonight. I think. But to my shame, I didn’t really get to see any of the support bands. 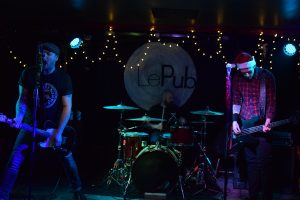 Whilst Le Pub is a live music venue, it’s a pretty cool place to go for a drink even if your not going in to the gig room. Slowly but surely the bar fills up with Newport’s finest hipsters, punks, and radicals. Craft ales are drunk, vegan burgers are eaten and metaphorical fat is chewed.

After several hours shamefully ignoring the support bands and drinking Orchard Pig, we head in to catch the main attraction,  the best band ever to come out of Caldicot, the legendary Pizzatramp.

The Tramp are also three sheets to the wind and continue the green room hospitality on stage. 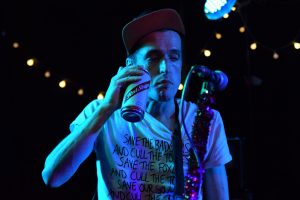 It can never be said that Pizzatramp songs are boring. They are not long enough for you to have time to get bored. The introduction to each song,  with explanations as to what the lyrics are about, usually last longer than the actual songs themselves. And often more entertaining.

One song is introduced as being about throwing up over the PA at a gig in Scotland whilst on ketamine. (Not a real life incident officer. Rumour has it, it was actually Manchester) 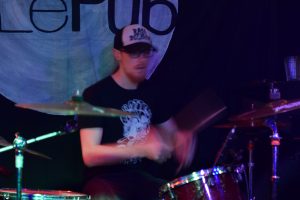 We get songs like, ‘I hope you fucking die’, ‘The Manic Street Pteachers are shit’ and ‘My back is fucking fucked’.

It has to be said Newport is far more down to earth than its bigger posher neighbor. (I mean Cardiff, there is fuck all posh about Swansea). All pretensions are left at the door and the mosh pit that forms upfront resembles a 70s football terrace on times – but without the flares. Mostly.

When the pressure cooker of the dance floor hits boiling point,  the steam is released without any fuss and everyone carrys on regardless. It’s a Newport thing.

Pizzatramp dont really take themselves seriously.  But you should.  Aside from the larking about and the wacky banter, when they can be arsed to play a song longer than a minute they lay down some half decent riffs. I’m not generally a massive fan of this hardcore nonsense  but I would rate these guys as one of the best nights out in Wales at the moment.

And to quote Tom Fowler,  “every town should have a Pizzatramp”. Unusually,  I agree with him for a change. 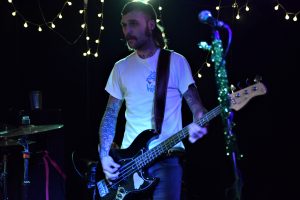 Once the ‘Tramp have done their thing, we head back to the bar. It’s now packed and there is a queue to get in. More Orchard Pig is swigged and peanut butter pretzels are wolfed down. More nonsense is talked, although by this time it’s either shouted or met with nods of understanding, even though you dont have a clue what is going on.

Eventually we head out into the night, making room for two more from the queue to be allowed in. We wander past several gangs of trouble makers in high vis jackets, but luckily the Newport natives are quite capable of making sure the police behave themselves.

After several decades of not being a fan of Newport, the jury is still out. Le Pub, however, is without a doubt the coolest venue in South Wales. And we will have no hesitation visiting there anytime.  New year, six nations, black friday – no matter what is going on around it, Le Pub is always capable of keeping its head whilst all around are losing theirs. And nonchelantly making it look easy . Check it out.