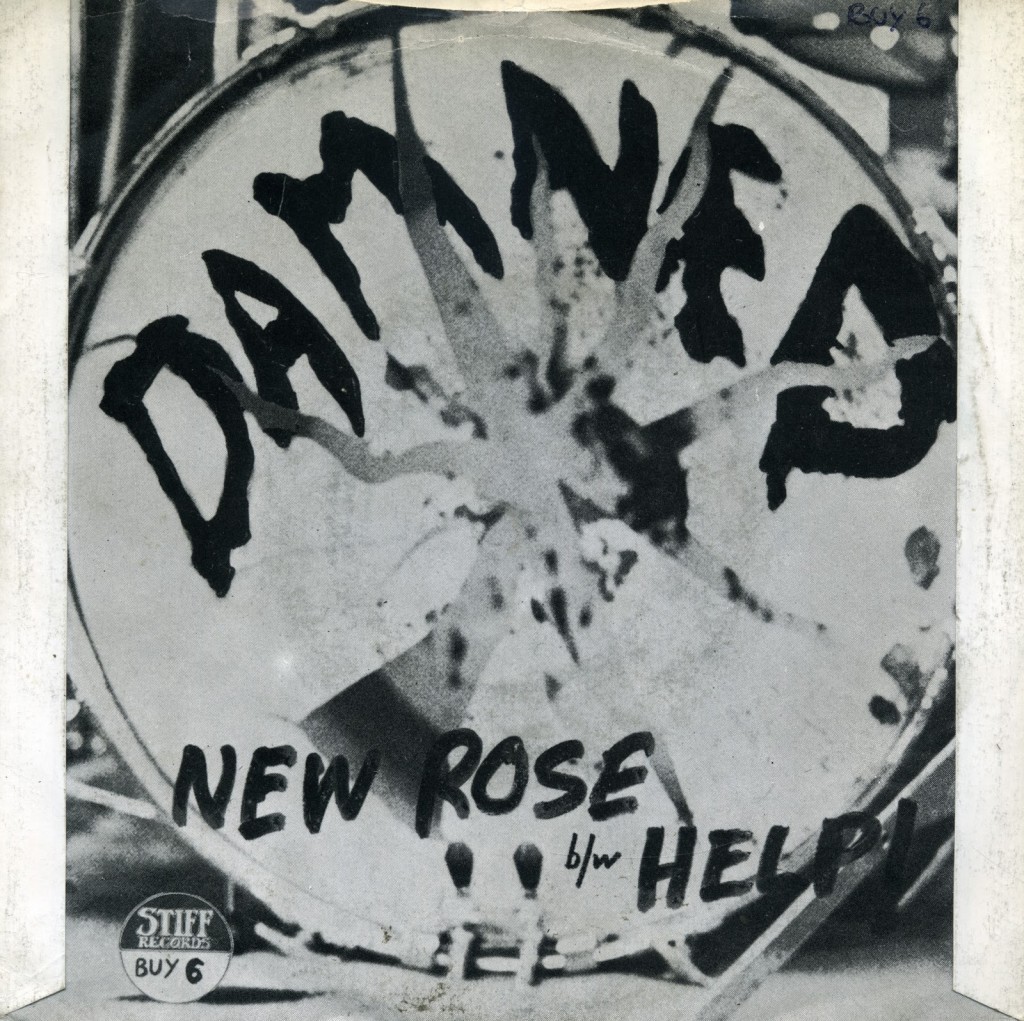 Today marks the 40th anniversary of the release of New Rose by the Damned, widely regarded as the first ever punk single. Yes, forty years of a brand new music that changed the world for ever.

Firstly, was it the first ever punk rock single? Well, it depends on your definition of punk rock. Many would argue that punk rock was born the other side of the pond, with bands like The Stooges, the New York Dolls and the Ramones. Even if you stick to this side of the pond, The Hollywood Brats, The Hammersmith Gorillas and The Pink Fairies, all arguably punk rock, beat the Damned on to vinyl by several years. Even over in Australia, a continent oft forgotten about when early punk is discussed, the Saints released (I’m) Stranded, an indisputably punk rock record, in September of 1976.

The difference with New Rose though, was that it was the first single from a band that were part of the new scene that had developed with the recognisable identity of what we call today Punk Rock. The Pink Fairies were scruffy hippies and the New York Dolls were – well, they were garage.

The second question would be were the Damned the first ever punk rock band? And the answer would have to be no. Even if you take the precursors of punk rock, like Eddie and the Hotrods and the The Doctors of Madness out of the picture, The Stranglers started out in 1974 and the Sex Pistols were gigging back in 1975. There was also the greatest band there never was, London SS – a band that never gigged or recorded but at one time or another featured many of the key players in the early punk scene, including the Damned’s Brian James.

All this was part of the firmament though, punk rock finding its feet and working out what it was going to be. The Sex Pistols were probably the first proper functioning punk rock band but the Damned were hot on their heels. How did the Damned beat them to vinyl? It depends on who you listen to. Some would say it was down to the competitiveness of the managers, some would say it was down to the Sex Pistols spending more time on polishing their production. But whatever the reason, The Damned managed to release the first punk single.

The third and perhaps most important question would be, what exactly is punk rock? To outsiders answer would undoubtedly be, unkempt hair, shabby clothes and loud talentless shouty rock music. A ‘uniform’ very quickly developed. Ripped clothes, safety pins, spikey hair, and leather jackets. A musical uniformity also developed, three chords, played fast and loud. It wasn’t long before the punk look was recognisable enough to appear on London post cards. This uniform was no doubt inevitable given that Pistols manager Malcolm McLaren was selling it in his shop, Sex.

This simplified version of punk spread like wild fire through the country and then back over the pond, selling back to America the sound it had tried to export to us a few years earlier. Bands started springing up all over the world copying this punk rock blue print. But this was missing the point somewhat. Punk was supposed to be about ditching the old and doing your own thing. It was about handmade fanzines, home-made fashions and not following anyone else. It was about rejecting the bloated prog rock past.

Whilst the early frenzy of bands like The Clash, the Buzzcocks, Desperate Bicycles, Satans Rats, Eater and so on bloomed like a new and original rose, very quickly bands like GBH, the Anti-Nowhere League and Blitz came along, copying that first wave. Which sort of defeated the point, what’s original about that?

Did that mean punk ended? No it didn’t, it just meant that it evolved whilst the mainstream was distracted by the imitators. You had post punk, and anarcho punk – then it moved even further away from its roots, with things like indie and acid house (whilst totally different, about as punk rock as you can get) and drum and bass.

As things like indie (music on an independent label) and acid house themselves became exploited by people trying to make a fast buck by packaging them, the punks just moved on to something else.

Punks were doing things their own way, writing magazines, setting up clubs, putting on festivals and generally questioning everything they were told by the establishment.

So, is wrapping oneself up in nostalgia and looking back forty years a punk rock thing to do? Surely we should be looking forward not backwards. Aren’t proper, pure, punks looking to the next thing? Well yes and no. If you are stuck in the 1970s and early 1980s then you really have missed the point. If you are an ‘ex-punk’, you never really were a punk, you were a fashion victim. If you were a proper punk, you are still rebelling in your own little way and you are looking for something new all the time.

BUT – if you are a ‘pure’ punk that thinks burning a million pounds worth of punk memorabilia to prove a point is a clever thing to do, you are also missing the point. There is no harm looking back to the glory days and remembering where we came from and how we got where we are. If you don’t do that then you are doomed to miss out on a rich seam of fantastic and inspirational music that changed the world. But when you look back you need to know which bits to devour and which bits to move to the side of your plate. This blogger would suggest that New Rose is worth treasuring – but don’t do as I tell you. Question everything I tell you – if you want to.