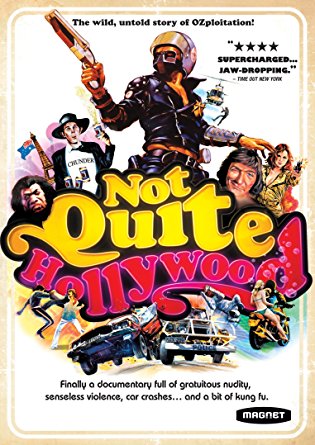 If you thought ‘Mad Max’, ‘Crocodile Dundee’ and ‘Picnic at Hanging Rock’ were the only films ever to come out of Australia you would be wrong. There is a whole genre out there, ‘Ozploitation’, whichwhich has passed most of the world by. Not Quite Hollywod tells you what you have been missing.

It will come as no surprise that, as with much of Australian culture, subtlety is in short supply and excess is the word.

Throughout the seventies it was a no holds barred fest of gore, horror, action and post apocalyptic sex, going well beyond the boundaries of taste and art that the rest of the world stuck to.

This entertaining look at the rise and fall (and resurrection) of Ozpolitation features interviews with the cast and crew of many of the films and a heavy dose of Quentin Tarantino, who, surprise surprise, raves enthusiastically about Ozploitation.

To be honest, most of the films look unwatchable to this reviewer, but this documentary is a must see, with laughs galore at the sheer audacity of the plots and the devil may care attitude towards the rules of both taste and safety.