Mclusky burned briefly but brightly between 1996 and 2005. Depending on which source you read, they either formed at a gig in Blackwood Miners Institute, at the Reading Festival, or whilst working together for a double glazing firm. But that’s the way they seem to roll, not getting bogged down with facts, history or rules, just getting stuck into laying down dirty chunky riffs.

After splitting in 2005 the members went their own way and did their own thing, with varying degrees of success, including forming The Future of the Left, Shooting all Unarmed Men and Christian Fitness.

(*EDIT: Just to clarify, ‘Shooting all Unarmed Men’ is the name of a band, not what they actually did) 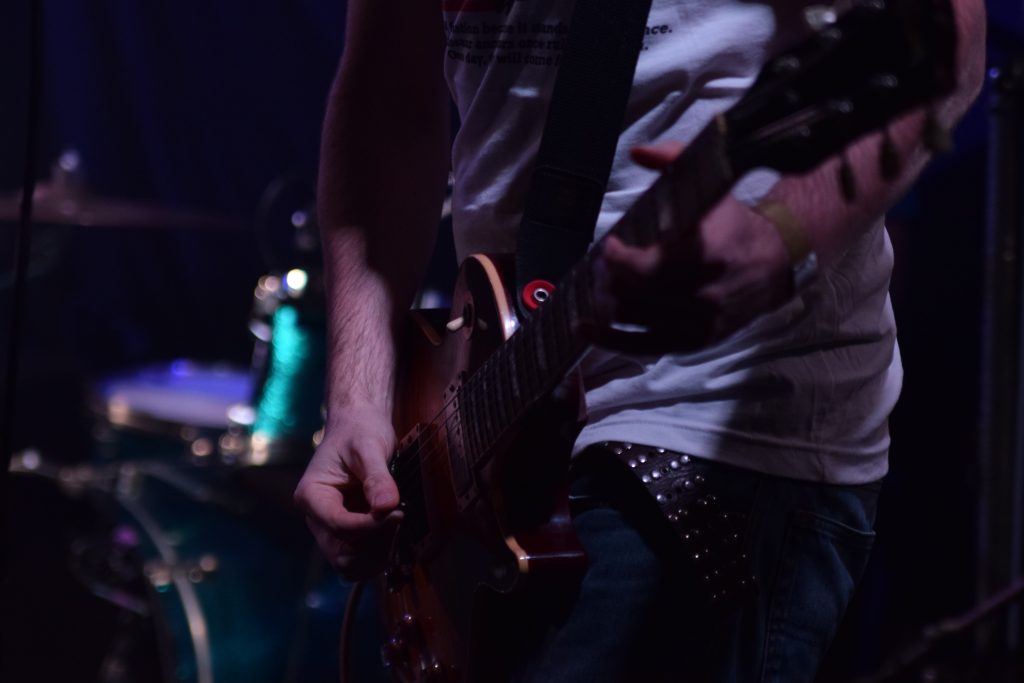 In 2014, Singer and lead guitarist Falkous announced a benefit gig to help save venue Le Pub in Newport, with a band playing Mclusky tunes, but featuring Falkous and members of Jacrew. A handful of other dates have followed since.

With a slightly revised line up, with new bass player, and now going by the name Mclusky*, they announced they would be playing Cardiff’s Clwb Ifor bach on 20th December. Tickets flew out like flying out things and were sold out quicker than Glastonbury. Not being quick enough ourselves, we were relieved to discover that a second date was quickly added for the night before. Perhaps just as well, I’m not sure I could cope with the last train home from Cardiff on black Friday.

On the night the city centre is busy, but not excessively so. The calm before the storm perhaps, as everyone gears themselves up for the carnage that has come to be associated with the celebrations around the birthday of the baby Jesus.

After a swift cider in the City Arms, we head into Clwb Ifor Bach to find the support band in full swing. We have to faff about a bit by the bar because it is an over fourteens show and they won’t let us buy a round without seeing who we are getting the other drink for. It does not last for long though as the two bar staff are overwhelmed as it is, without the entire crowd going to the bar. I hasten to add, in all my years going to this venue, it is the first time I have had any grumble about any aspect of the club. But I digress ……

We arrive just in time for me to get my camera out and snap the support band walking off stage. 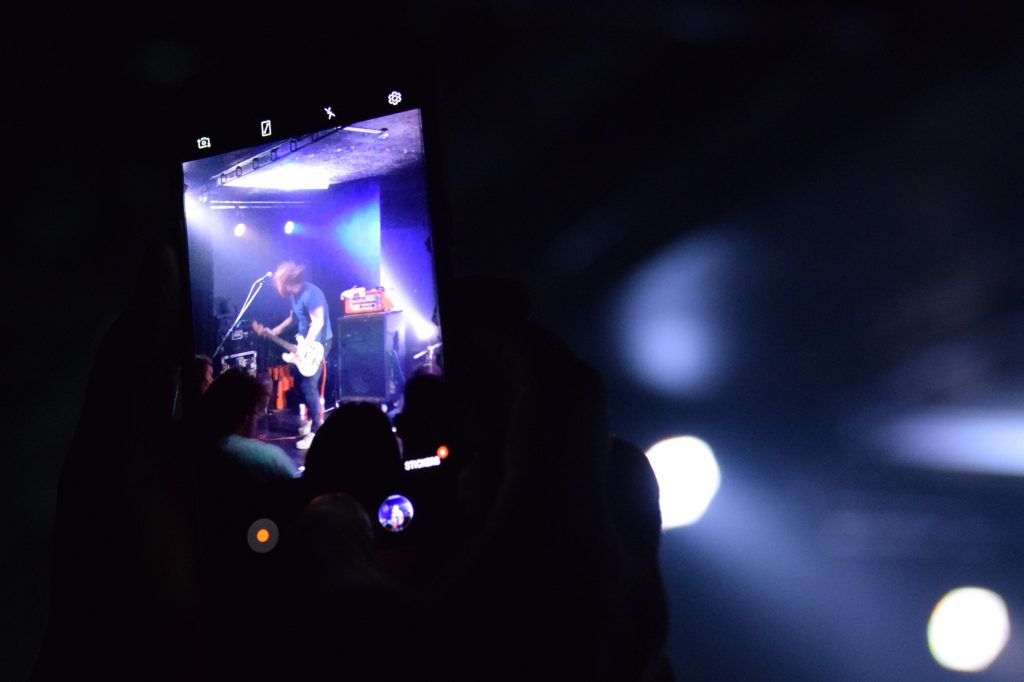 Standing down the front we soon find ourselves surrounded by familiar faces and the wait for Mclusky* flies by.

Kicking off with the irreverent ‘Fuck this Band’, they storm their way through a gloriously distorted rough edged set of grungy rock and roll with bass to the fore, not just part of the rhythm section.

Two dozen or so numbers are rattled off, covering their three studio albums plus the odd b side and rarities. The dancefloor quickly turns into a seething mosh pit with sweat, testosterone and arms flying everywhere.

Despite the seriousness of the sound, the self-depreciating banter between songs is light hearted and often laugh out loud. People who wear hats indoors are mocked, people who claim to have seen b-sides performed live back in the day are called liars and people who use terms like ‘back in the day’ are dissed.

Their own back catalogue is also dissed, with Falkous claiming he does not like half the music they are playing – keeping up the tradition of keeping you guessing of what is fact and what is fiction.

At one point we have a left handed bass player strapping on a right handed six string guitar and trying to work out how to play a tune he is not familiar with (don’t ask me what it was, I’m not familiar with it either, so have no idea if he got it right).

We also get a roadie join them on stage to play for one number (he was introduced but I can’t remember which band he was from. It is after all, the night before Black Friday).

I do recall we had numbers like ‘Alan was a Cowboy Killer’, ‘Collagen Rock’, ‘That man will not hang’, ‘Without MSG I am nothing’ and ‘Rice is nice’ 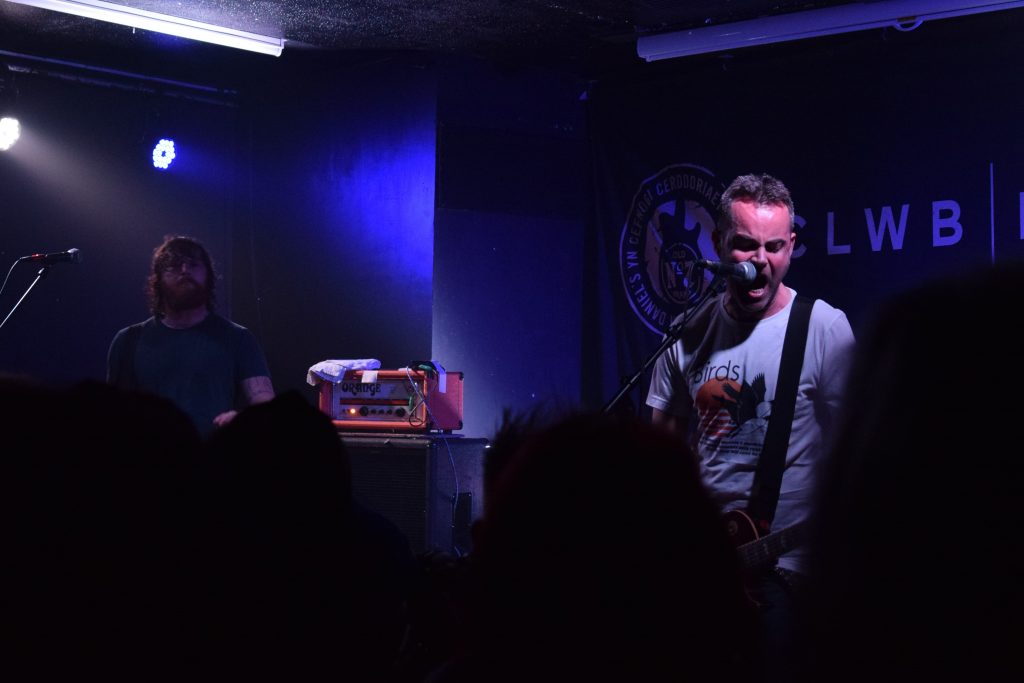 They end with ‘To Hell with Good Intentions’ which merges into ‘Reviewing the reviewers’ before they disappear to a cacophony of feedback. No encore. They leave the crowd as they did when the split in 2005 – wanting more.

A lot of gigs at Clwb Ifor tend to finish early these days. A 10pm curfew is not very rock and roll. But given the pathetic time of the last trains home up the valleys, I’m warming to the idea of an early curfew in my old age.

And it turns out that missing out on the Friday tickets was not a disaster. Cos Friday night will now be Pizza Tramp night – watch this space.