Autobiography of Steve Jones, guitarist with the Sex Pistols – and some other stuff. 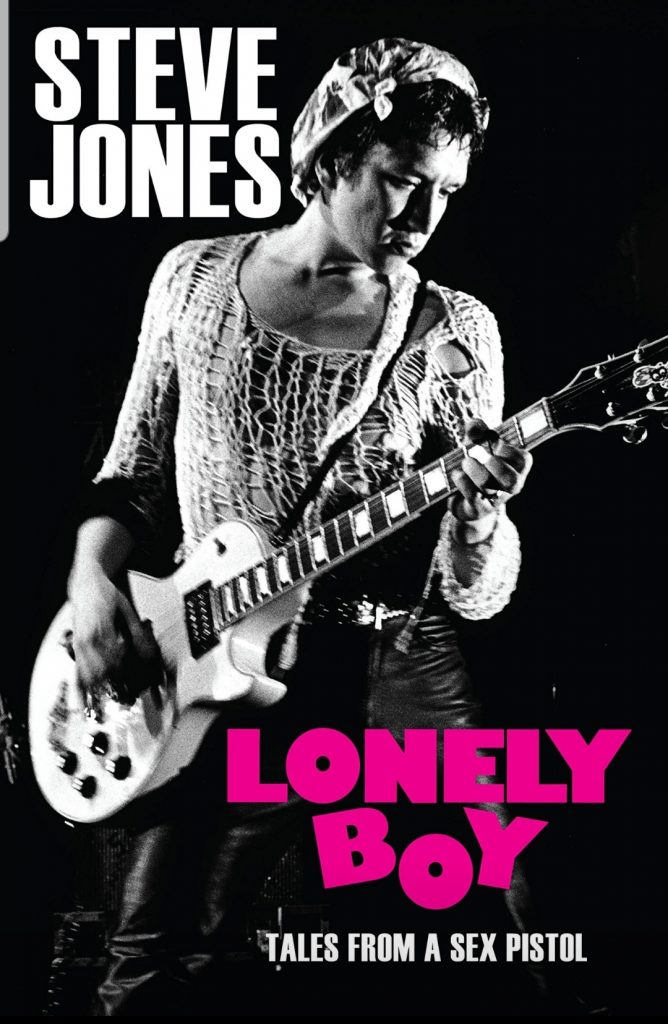 First, we thought we should state the bleeding obvious. This is the autobiography of a man in his sixties. He is famous for being in a band that were only around properly for three years (plus three re-union tours) and only recorded one proper album. So if you are wanting to be reading about the Pistols from start to finish, this is not the book you are looking for – as Obi Wan Kanobe might have said.

There is nothing middle class about Steve. From a broken home, the account of his early years is like reading Oliver Twist. A tale of abuse, poverty and petty crime. From the opening you get the flavour of the story, with no holds barred this is a remarkably candid tale of his life. From the sometimes sordid sexual exploits to the stealing of anything and everything left unattended.  If it moved, he fucked it. If it didn’t move, he nicked it.

The fact that this book got written at all is impressive,  given that Steve did not learn to read and write till quite late in life. As a result there will be no Nobel Prize for literate,  there is no dexterous prose, but we do get an unputdownable page turner that makes you want to know what comes next.

His passion for music develops early and much of his petty larceny involves musical instruments and the clothes of rock stars left back stage whilst they are performing. The first kit the Pistols used was, unsurprisingly,  nicked by Jones.

Whilst the Pistols could now pack out stadiums, back in the day they rarely played to big crowds. Punk was so new hardly anyone knew anything about it. They of course became famous after the ‘Filth and the Fury’ episode on the Bill Grundy show – but after that many gigs were either cancelled by promoters or banned by local authorities.

And just as they were starting to get some attention,  internal politics led to them swapping a talented bass player, Glenn Matlock, for someone who looked the part but couldn’t play a note, Sid Vicious. As a result, Steve played both guitar and bass on the only proper album, ‘Never Mind The Bollocks’.

Prior to forming the band Jones had only a rudimentary grasp of playing the guitar but many nights fueled by chemicals forcing himself to learn changed that. Despite the deliberately cultivated image of chaos around the band, Steve was determined to be a bonafide rock star.

The stories of internal politics within the band and with the manager are well documented. They have been written about by band members and journalists,  and allegedly documented in the film the ‘Great Rock and Roll Swindle’. Many of those versions can be taken with a pinch of salt. At least here you get Jones’s side of the story and we get the impression it’s fairly accurate.

Life did not end in the Winter Gardens at the Pistols last show. Steve has played in numerous bands since. Now long time resident of the USA we here many tales of hanging out with rock stars, riding motorbikes, forming bands and hosting his radio show, ‘Joneseys Jukebox’.

It’s not all milk and honey though, and we get many candid tales of struggling to cope with alcoholism and drugs. After several failed attempts it would appear that (spoiler alert) he has cracked it and has been sober for a good few years now.

As memoirs go, they don’t come much more honest than this. Steve has gone through some tough times from pretty much the moment he was born, but at no time does he feel sorry for himself, he just picks himself up, dusts himself off and starts all over again.

There are other versions of the Sex Pistols story,  but we cant help thinking that this is probably the most accurate. But as stated at the outset, this book is about far more than a band that were only around for a fleeting moment, even if they did change the face of rock and roll forever.