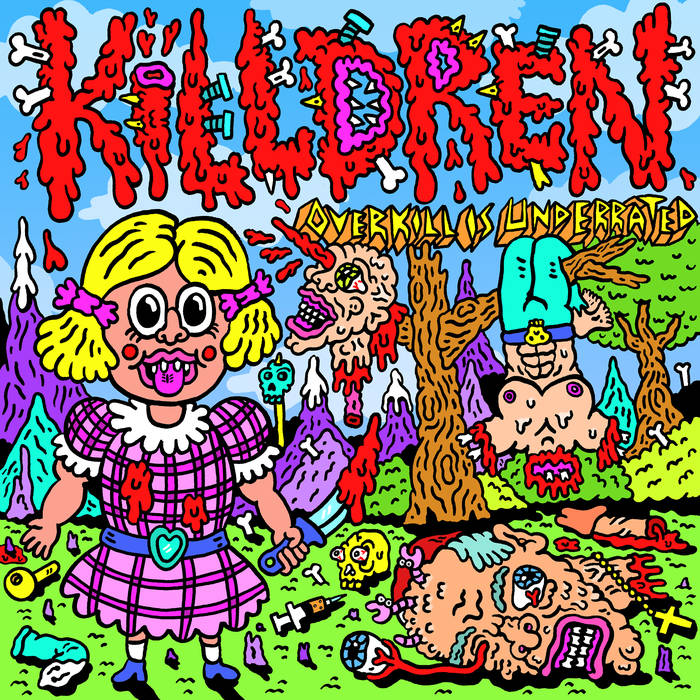 One day, in the dim and distant future, Efa Supertramp will sit down, take a breather, or even possibly sleep. Until then, she is gonna run around fuelled on adrenalin with fingers in all sorts of pies, like this latest project, Killdren.

Not satisfied with running her own record label, writing zines, travelling all over Europe playing solo gigs, setting up squatted art galleries, sticking it to the ‘man’ and doing a degree, last year she teamed up with a sampler, a lap top and Nick Ronin from Tunbridge Wells to form rave outfit Killdren.

Efa has always had a DIY attitude to everything she does. Rather than spend ages pontificating about doing something, she just gets on and does it. Hence this EP is not some over produced psy-trance outing, it is dance music that is pure punk in its attitude and sound. Raw, stripped down, no frills, immediate.

Ironically, for someone who never stops working, the first track is about the capitalist work ethic. ‘Work Harder Fucker’ has a go at exploitation, zero hours contracts and long hours for minimum wage.

The subject matter of ‘Save the World’ is not immediately obvious, but it touches on over population, the right to choose, selfishness, materialism and, erm, over population. Towards the end we get a chorus of ‘Save the world, kill your children’. No doubt after several listens it will make sense, but perhaps that is the intention. Pop music is not supposed to preach. The best songs get you thinking.

Empires All Crumble is optimistic, if you believe that empires are bad (we do).  It reminds us that throughout history ‘what goes up, must come down, all empires all crumble’. It ponders on the thought that the empire of capitalism is doomed to crumble like the Romans and the Greeks before them.

‘Designed to fail’ reflects on in built obsolescence, designed to feed the production chain and keeping consumerism alive.

‘Kill Tory Scum’ was originally released prior to the 2017 election and whilst controversial went unnoticed for many months before suddenly going viral (ish) and getting loads of outraged Tories leaving comments on the youtubes.

The EP closes with the cheerful ‘Profits of Doom’ which shines a light on the arms industry, who make profits from doom (see what they did there?).

Here at Peppermint Iguana we are happy that Efa is not wasting her time sleeping and is constantly creating. She already has a back catalogue that artists twice her age would be proud of. The Boy Ronin aint no slouch either, ironically his remix for Destroy Oh Boy is called the ‘Breakcore is just having a power nap mix’. You aint got time to be sleeping boy, you can do that when the empire has crumbled, we want more Killdren choons. Somehow we doubt we will have to wait long.

Overkill is Underrated is released on 19th January 2018. Available through the Bandcamps