16th February 2020 will go down in the history books for the storm that hit South Wales, in the shape of Storm Dennis. Villages and even whole valleys were cut off and boats were seen in floating down streets where normally cars drive.

But as the rain eased in the evening, a few hundred hardy souls gathered in Cardiff University Students Union to groove and skank to the Gentlemen’s dub club.

The Student’s Union in Cardiff is like a Tardis, although it looks big from the outside – and getting bigger with a new extension out the front – once inside it is a rabbits warren with at least three separate venues in the building. The Great Hall, downstairs, has a capacity of around two thousand and is, frankly, too big for our liking – especially when full. Tonight’s gig, however, is in Y Plas, on the floor above and is a much more intimate venue. It still has a capacity of around a thousand but the lay out of the venue means you never feel cramped.

We arrive uncharacteristically early to find the venue sparsely populated, but it does not take long to fill up. Standing down the front for a while it appears that it is a very young crowd, but when visiting the bar it becomes clear that it’s just a case of older heads happy to chill around the fringes.

We get a rapper on for half an hour, toasting over a DJ. Doesn’t do much for us, but he gets the youthful crowd bouncing. Then after another half an hour wait the lights go down and the Gentlemen of the Dub Club slide onto the stage.

All suited and booted, they look like an extended version of the Blues Brothers – and they look ready to party. 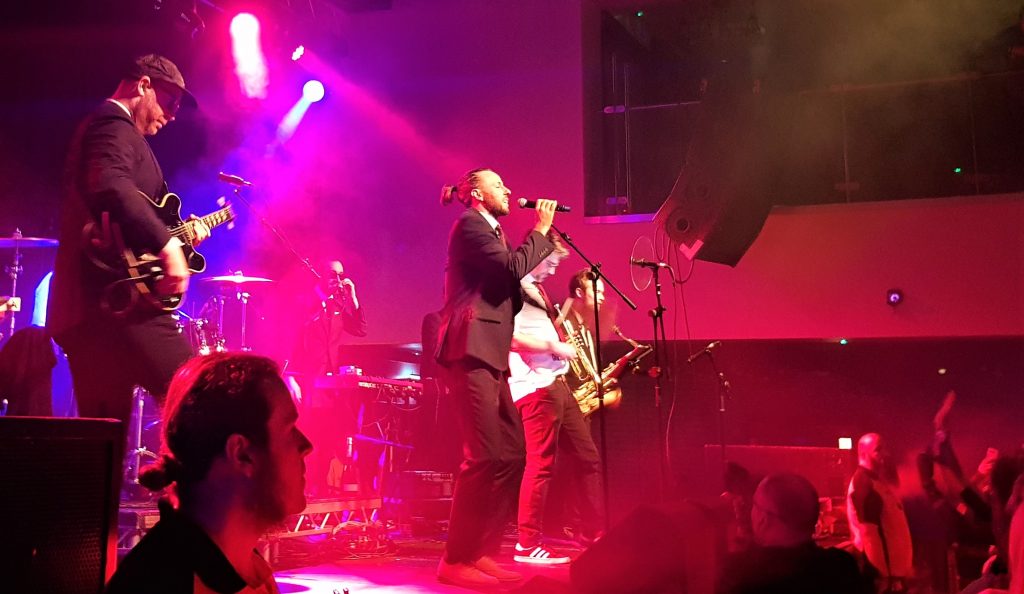 They kick off with ‘Music is the Girl I Love’, which pretty much sums the feelings of everyone in the room – prompting the first bouncy singalong of the night.

After standing down the front for a while to get some photos on the phone (another one of those venues that gets fussy about proper cameras) the bass becomes a bit much. It is so low and heavy our nether regions are vibrating, so we head for the back with the rest of the old codgers.

With over a decade of gigging and five reggae infused albums behind them, they have their stagecraft down to a tee and know exactly how to flick all the right switches. They know when to throw in chilled dubby numbers and when to up the tempo. 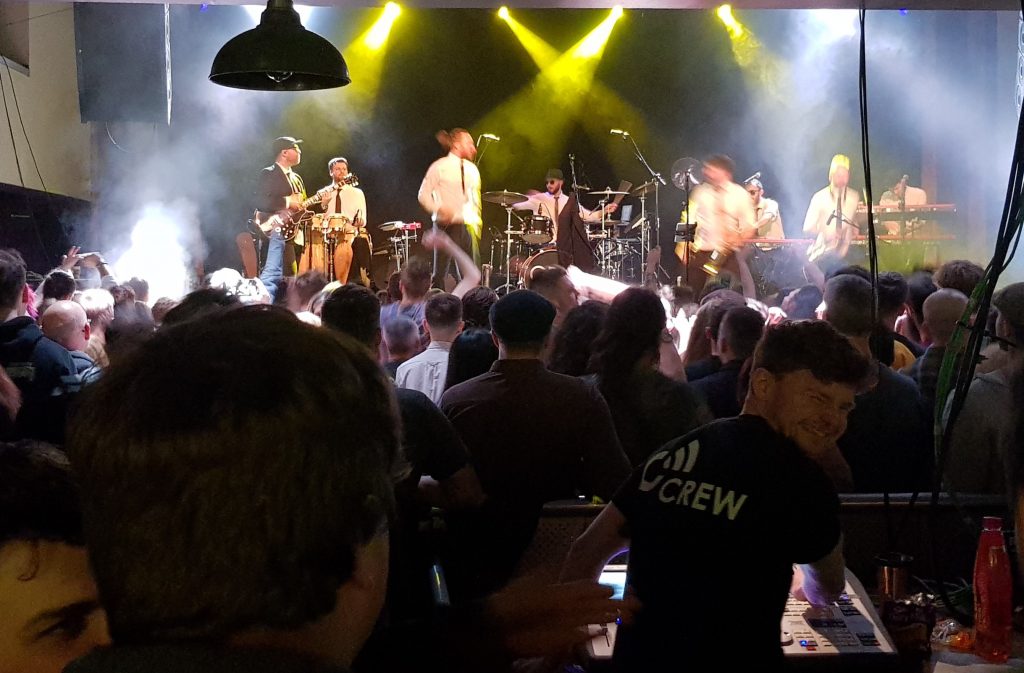 ‘Dancing in the Breeze’ has never struck us as being particularly bouncy, but half way through the crowd reaches for the sky and bounce like wheelie bins bobbing down a flooded river.

And so they go, lifting, shaking and dropping down – giving the crowd something to bop to, but not tiring them out.

‘Gentlemen’s Sleng’, ‘Stardust’, ‘Out of this World’ and the ‘100%’ single this tour is promoting are some of the tunes we remember.

As they go off we feel cheated by the short set, but checking our watch they had been on for an hour, it just flew by.

Singer Jonathon Scratchley comes back on to tell us how much he loves playing Cardiff. This could have been bullshit but given the number of times they have played small venues in this city on their way up, we don’t think so. They love Cardiff and Cardiff loves them – with them having to move to a bigger venue on each visit. 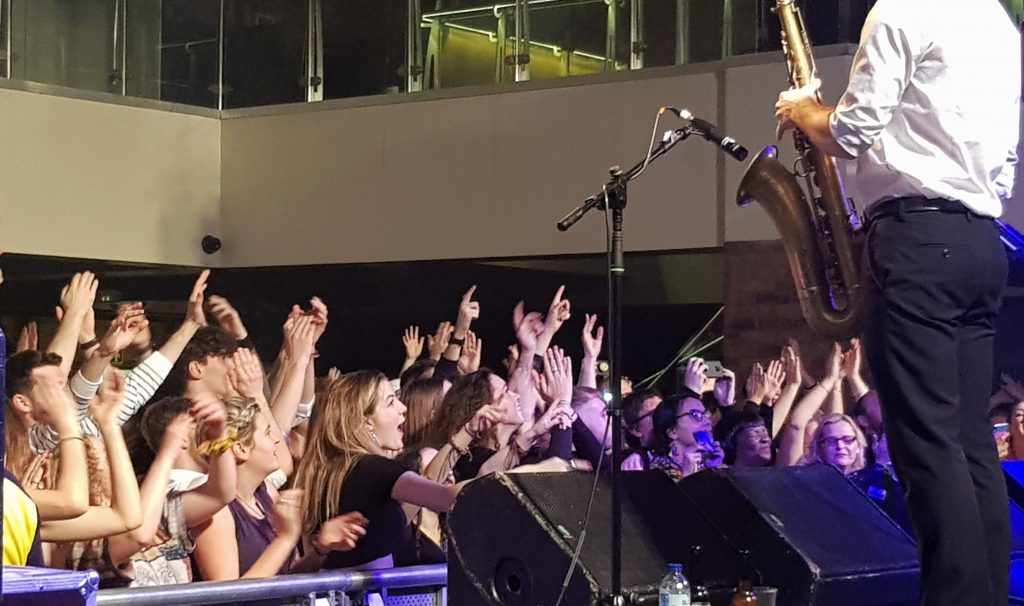 After his love-in with the crowd the rest of the band return for an oddly mellow, but perhaps appropriate, number for an encore, ‘Let a Little Love’. The crowd swoons along.

Then a pause and a big grin. As soon as the first notes of the last song are played a huge cheer goes up. By way of confirmation that the ‘Diff loves the ‘Dub, Scratchley doesn’t even get to the end of the first line before the crowd takes over.

‘High Grade’, from the EP, ‘Open Your Eyes”, was a guaranteed crowd pleaser from the moment it was released in 2012. It has just about everyone singing along, although given how energetic the crowd is, not many of them have been on the ‘High Grade’ tonight.

After bouncing around for five minutes most of the band slink off behind the keyboards whilst we get an extended instrumental dub for five minutes, then they come back for another few choruses to make sure they go out on a ‘high’ (no pun intended). 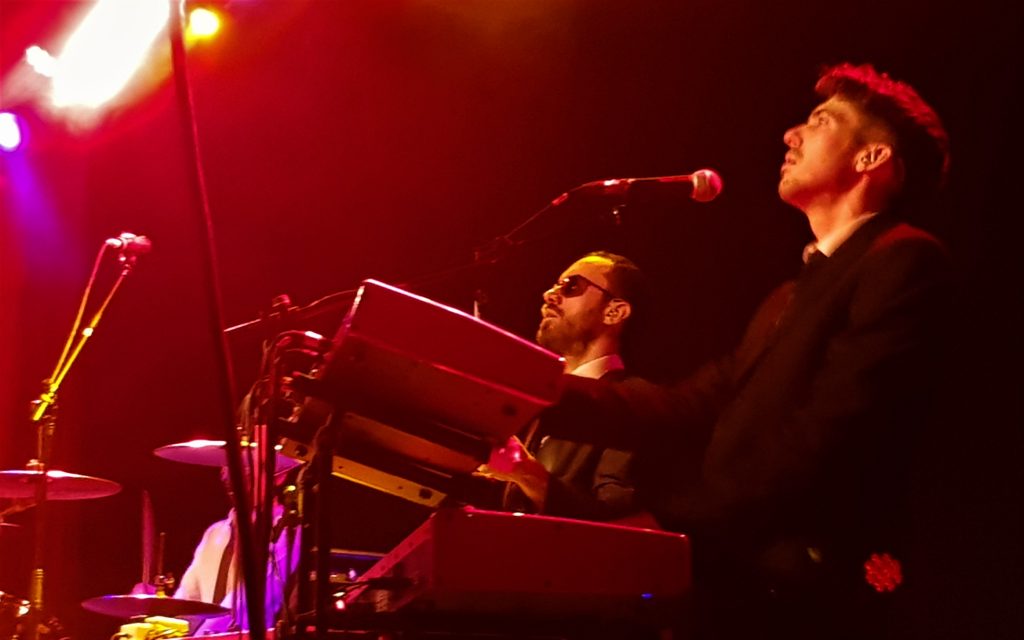 And so, after a few hours of escaping reality and feeding the soul, we pour back out into the stormy night, considerably less stressed than before we went in.