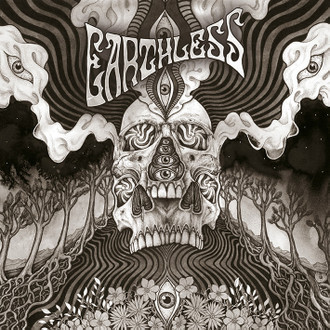 Earthless are slightly self-indulgent. And we don’t mean they play music only they enjoy, we mean we like blasting them out when we are on our own. We like turning the volume up to eleven when heading down the motorway late at night, or listening on headphones whilst trying to drown out the noise of a busy train, or just on full volume when the neighbours are away.

Mmmm. Listening to them at a loud volume seems to be a bit of a theme there. This aint shit you listen to quietly.

This is stuff you want to immerse yourself in and not have to worry about talking to people to when it’s on. It’s heavy and it’s fast, but it’s got rhythm underlying it. You can dance to it, but not whilst anyone is watching you.  Bass riffs to make the earth shudder, with complex guitar noodlings over the top. It’s psychedelic, but earthy. No goblins or space ships are brought to mind, this is blue collar, working class psychedelia.

They cite kraut rock, Japanese psyche and jazz as being influences and it shows through. Their heavy bluesy explorations are exercises in experimenting with their art, taking themselves and listeners on journeys into places unknown, yet familiar at the same time.

Earthless don’t believe in brevity. Previous albums have featured tracks anywhere from ten to thirty minutes long. All of them blissed out instrumental numbers. The notable exception being their cover version of Cherry Red, originally by the Groundhogs, which appeared on their 2007 debut ‘Rhythms From A Cosmic Sky’ – alongside two twenty minute long numbers.

That cover version, until this latest release, was both their shortest number and the only number to feature vocals.

This album, therefore, is a bit of a departure. Rather than just two or three numbers, we have six, yes, six whole songs on this album. And several of them have vocals on them, with guitarist Isaiah Mitchell stepping up to the mic – thus proving they don’t need to get anyone else in for vocal duties.

The arrival of some tunes short enough to be played on the radio is welcomed by the radio division of Peppermint Iguana, but this departure does not signify the loss of any of the oomphh from this power trio. They are still intense enough to get the blood to rise, still blissed out enough to lose yourself in and still leave you wanting more.