Dubioza Kollektiv. Balkan-beat-folk-punk-hip-hop-ska-techno-rap-fusion in the Globe, Cardiff. Just another Tuesday night in the world of Peppermint Iguana.

Buckle up sisters and brothers. We are going for a ride. This was the second best gig we have ever been to.

We like to think we have our finger on the pulse, but the Dubioza Kollektive have managed to sneak ten albums passed us and played gigs and festivals all over Europe for the last ten years without us catching them live.

But we have caught them now, and what a breath-taking experience it was. 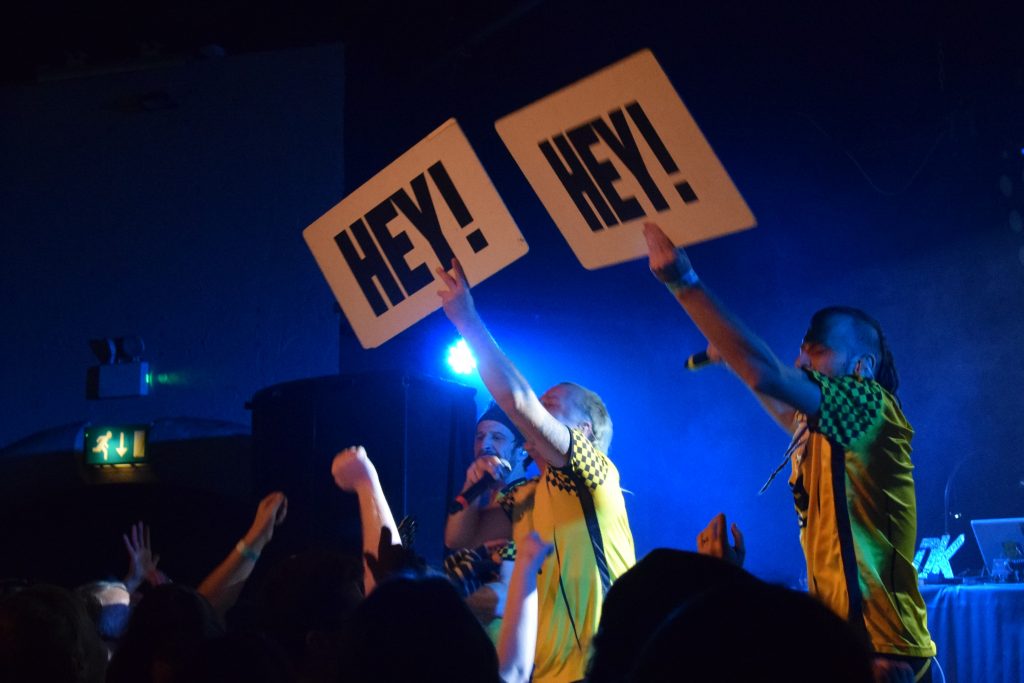 Think back to your favourite live band and the first time you saw them. Think back to occasions when you have been caught off guard by a band at a festival you had never heard of blowing you away. Hell, think back to the best sex you have ever had – and you will be close to appreciating how good Dubioza Kolektive are live. (OK, the last comparison might be going too far, but they were bloody good).

As we arrive at the Globe, the place is empty. We think to ourselves that the twenty quid entry must have put people off. But then, as if by magic, ten minutes before the band come on, the place fills up pretty rapidly. It is not a capacity crowd, but just right. Enough to make a party but not so many as to make it over crowded. Just enough room for everyone to dance. And we mean everyone.

There is no support band. There’s not really enough room on stage with all the kit for an eight piece band already on stage. When the lights go down Alexa (or maybe Siri, or one of the other smart speaker voices), introduces the band and lays down some rules about dancing. Then the band enter stage right, all dressed in yellow, like a Balkan football team. 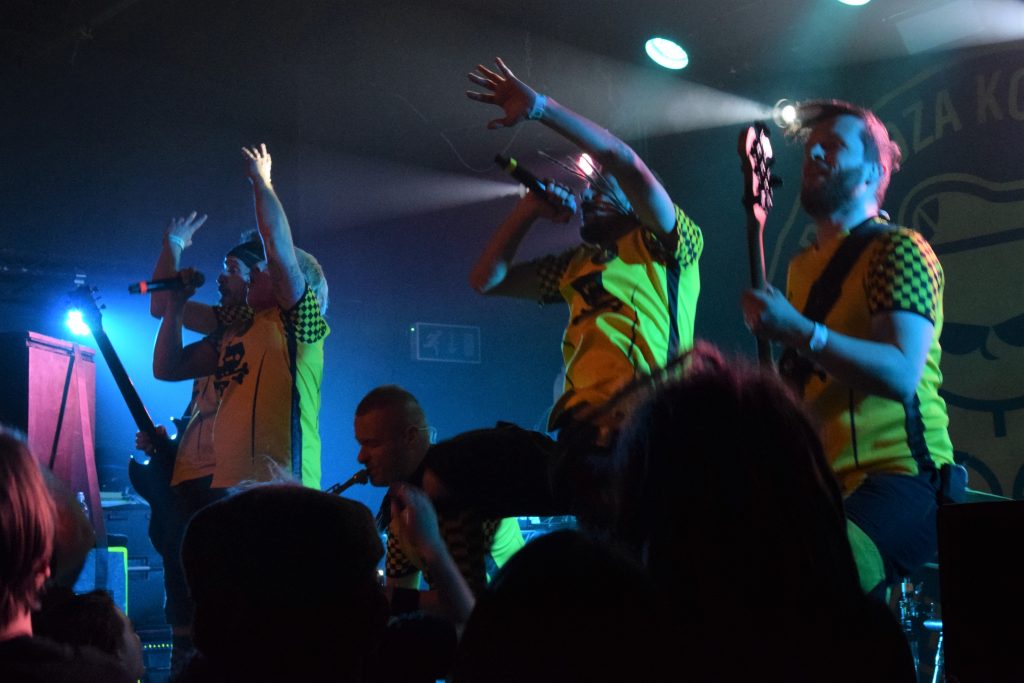 Before we have time to brace ourselves – bang – they explode into action with their own high energy – punked up take on the now well established Bslkan Beats vibe.

The band is made up of a cross section of Balkan nationals, Bosnian, Croatian, Serbian, Slovenian – nations that have had a stormy relationship in the last thirty years, to put it mildly. But these guys are a shining example of how music defies borders and nationalism and unifies human beings.

They kick off with ‘USA’, and continue to spread the word of internationalism through the set. They have a pop at Brexit – not in a negative way, more of a ‘we love you and want you to be in our family’, kind of way. A politically risky move, but we suspect anyone that goes to see these guys is going to be an open minded internationalist.

The new album, ‘#fakenews’, features heavily in the set and we recognise most of the numbers they play. Not bad considering we only downloaded it twenty four hours earlier. Despite having burned it onto a CD to listen in the car  we wanted to support the scene by buying the official CD off the merch stall. But we can’t.  The only way to get hold of any of their back catalogue is to download it for free. They give all of their music away. This band just gets better and better. 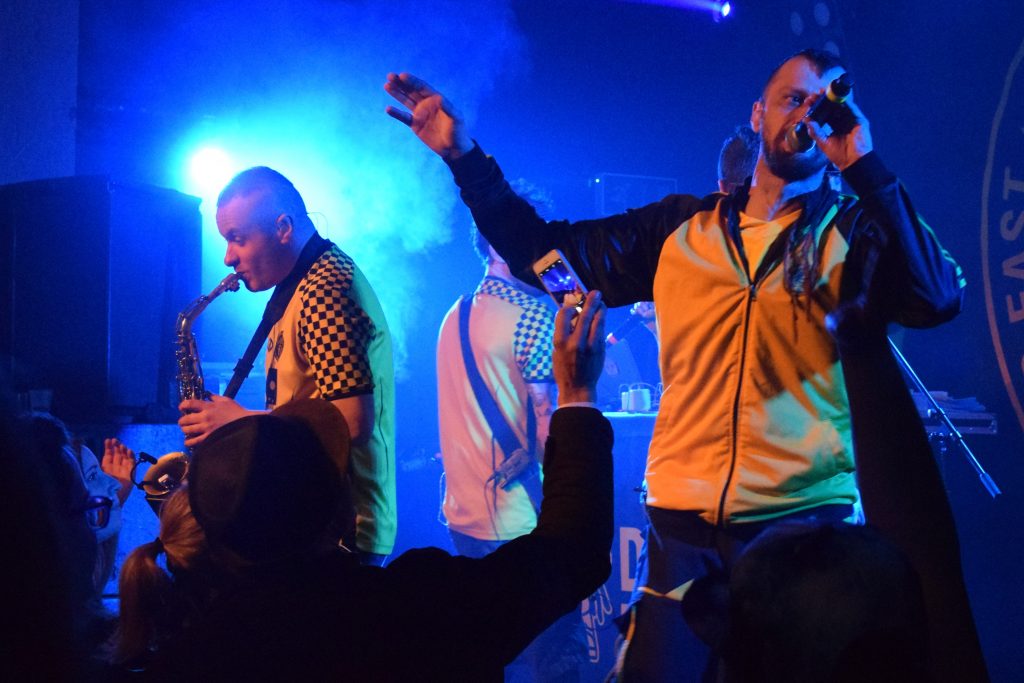 Whilst some bands are miserable shoe gazers and some bands spend the whole set falsely smiling and encouraging, these guys smile and laugh from start to finish in a way that cannot be faked. They are having the time of their lives.

They laugh and joke all the way through the set. At one point they introduce one ‘mature’ looking gent from the crowd, stating that he has adopted the band so thet can all have UK citizenship. They have a break to teach everyone how to dance Bosnian style and at one point, after asking how many in the crowd have jobs, declare they have to stop so everyone can get a good night’s sleep before work. “It’s Tuesday night for f**k’s sake”.

They have just the right mix of Balkan ska jig along tunes and full on rock infused techno. How does one dance to this? Well tonight we get a mosh pit type thing forming, all illuminated by a brilliantly choreographed light show. 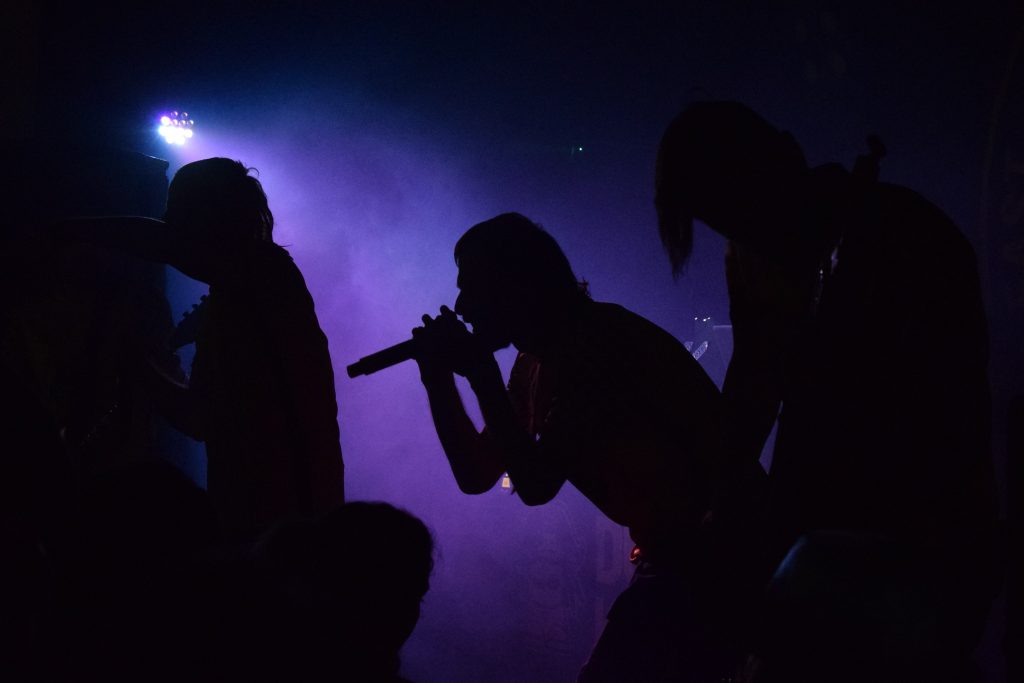 Yes. This is the full package. We have no complaints what so ever. Even the twenty quid in now seems a bargain.

As the show cones to an end we reflect on the good fortune that led to us stumbling upon them twenty four hours earlier and quickly search the net to see where else they are playing on this tour. Hmmm. Exeter. Should we?

When we were young we used to get a buzz like this regularly, but after several decades of going to gigs we dont get it often now. I’m not even sure if any band can do it more than once. It’s the thrill of discovering something new and experiencing something phenomenal for the first time. Last time we felt it was French Ska-Punk band Zero Talent in Thr Lost Arc. Prior to that… couldn’t really say.

But one thing is for sure, we are gonna try and get that buzz again by catching them next time they are in the hood. And probably travelling to see them.

Second best gig ever. The first best? Don’t know. There must have been better gigs over the years, but right here, right now, we can’t think of one.