Cosmo somehow manages to be both a national treasure and an enigma at the same time. With a fairly extensive back catalogue, this release acts as a ‘Cosmo for beginners’ taster. 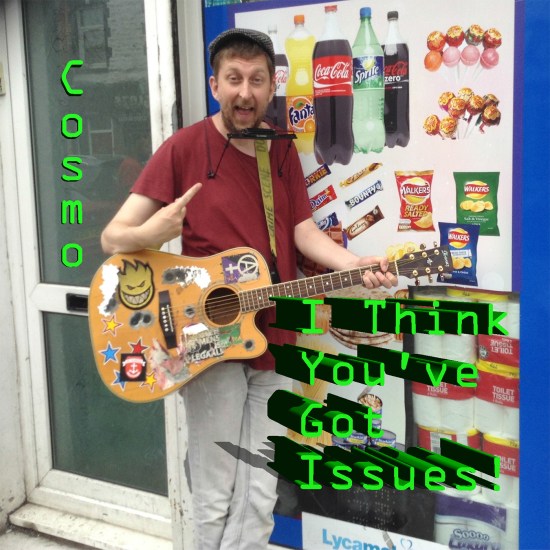 He is a well-known face on the underground festival/protest/DIY scene. Anyone that matters will be familiar with his cheeky grin and his self-effacing humour.

He has wowed the darlings at the Edinburgh Fringe and played to kids on the West Bank. He has recorded in the Brazilian Rain Forest and made videos on the Magic Traffic Roundabout in Splott.

His TV appearances include Children in need, The National Lottery live and Crime Watch. He has played to 80,000 trade unionists in London and three crusties and a dog in Pontypridd.

Syrian refugees, desperate DJs and Toy Mic Trev are just three of the people that have regretted working with him; and his live performances have emptied venues, inspired conga lines and prompted hecklers to demand he plays somebody else’s song.

No one can argue Cosmo has not ‘served his time’ and ‘paid his dues’; treading the boards of grassroots venues, squats and muddy fields. He makes Seasick Steve look like a pampered playboy (which he is really). All these life experiences, combined with a voracious appetite for studying the history of creative resistance and a taste for home-made gin have resulted in a troubadour that can  captivate any audience with his charm, wit and a padlock on the door.

For several decades he has been a constant presence as ‘part of the movement’; always on hand to provide music for any protest, benefit gig or bah mitzvah. “What you singing against mate”? “What have you got”? This readiness to lock and load his guitar at a moment’s notice, more often than not for free, has led to some of us taking him for granted. He is just always there.

But this retrospective look at some of his finest moments gives us all a chance, those that have known and loved him for years and those of you that have never heard of him, to marvel at this jewel hidden in plain sight.

For your money you get eleven sonic ultrasound images showing us what is going on inside the brain of comrade Cosmo. We get the humour of the title track, ‘I think you’ve got issues’ (complete with Kazoo solo) and the cover version he has made his own, ‘Oi Mush’. We get the appeal to ridicule – of the ruling classes with the ‘Clench of Notorious Brits’ and of Climate Change deniers with ‘Climate Change is Coming (and I don’t give a shit)’.

Nationalism is challenged with ‘Take down that Butchers Apron’, which demonstrates an insightful history of the Union Jack flag and what it represents.

‘Strike Occupy Resist’ is a show of solidarity with strikers, rebels and people who generally take their destiny into their own hands. A live favourite, this is probably his ‘Stairway to Heaven’ or ‘Paranoid’ – the tune that everyone knows.

He is also a human being and tracks like ‘Evelyn’, ‘I Could Play You a Million Love Songs’ and ‘Jack’s a Daddy’ reflect on love, parenthood and growing up.

Winding up this showcase a few mates from Kilnaboy pop around to back him up on ‘Abdullah’s Dilemma’. A lively gypsy-ish toe tapping tune with fiddle, accordion and double bass adding a bit of depth.

Now whilst this is supposedly a ‘best of’, it by no means encompasses all of his best stuff. So treat it as merely a starter for ten. Then go and investigate his back catalogue.

And don’t be cheap, throw him some change whilst you are at it. This shit doesn’t make itself you know. The poor boy has had to start brewing his own gin due to lack of funds.

Buy other stuff on his Bandcamp page

Back in May 2015 Cosmo dropped in to the Dapper FM studios for a ‘cheap star in a reasonably priced radio studio’ slot on the Peppermint Iguana Radio Show.

The result can be listened to below – includes tales of activism, globetrotting and making music.