A collection of tunes written, performed and recorded by Cosmo during Coronavirus Lockdown One, March to May 2020. 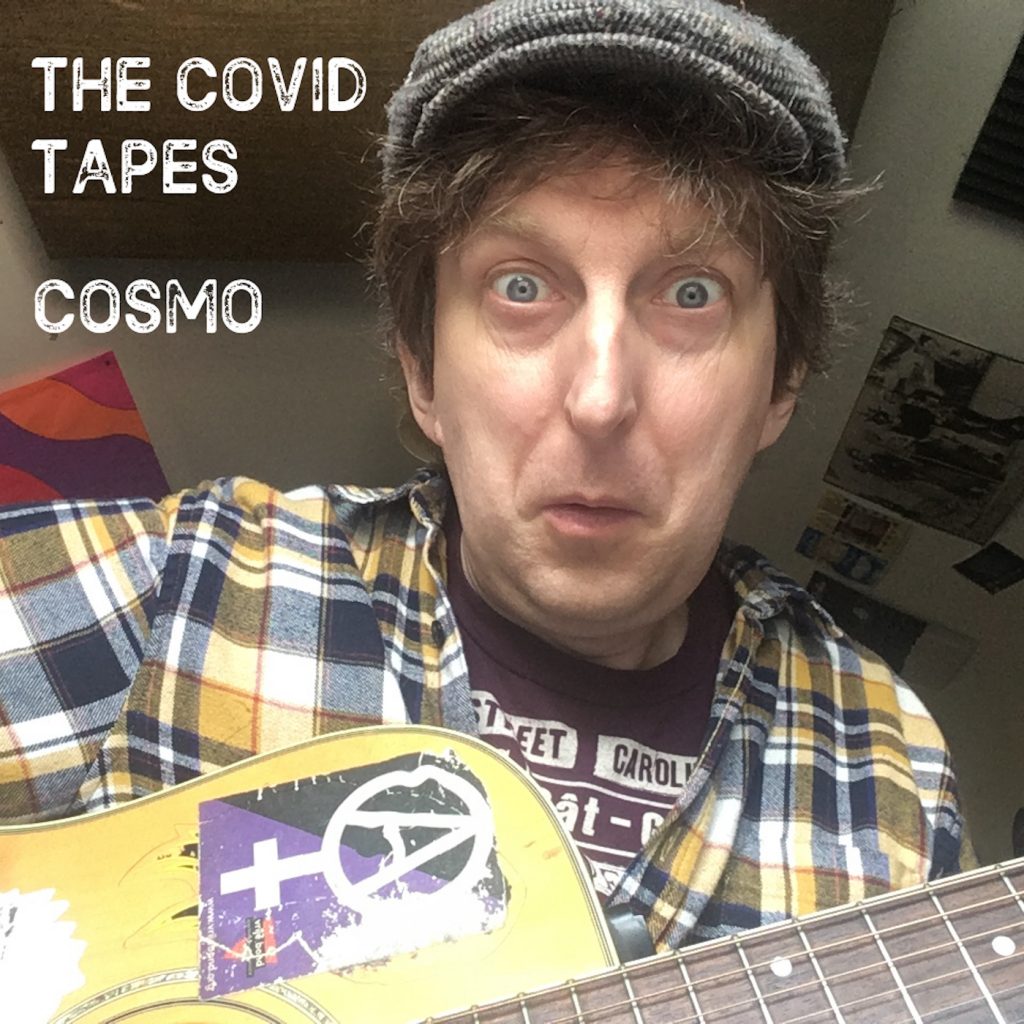 The (first) Lockdown in 2020 created difficulties for just about every strata of society – domestic, economic, social and cultural.

For music lovers, it meant no gigs or festivals. Whilst this has a social impact for fans, for musicians that rely on gigs for an income it is a disaster.

The obvious answer is to move on line.

Helsinki’s annual May Day concert saw over 700,000 people log in for a virtual on line party . Rapper Travis Scott even had a whopping 12.3 million people attend a gig inside the game Fortnite (no, me neither).

US indie band Courier Club are even organising festivals in the Minecraft game.

But for most musicians this is the stuff of dreams. Streaming a gig on Facebook using a phone is about as cutting edge as it gets.

Which brings us to Cosmo. He has the advantage of being a solo artist, so does not need to worry about social distancing from any band members. (Actually,  social distancing has never been a problem for the audience at his gigs)

His plan of attack has been to write, rehearse and then perform one new tune live on Facebook every week. It started out with a song about Whetherspoons and their decision to not pay workers when they shut down until the government weighed in. The song proved to be so popular and created such a backlash,  that Whetherspoons quickly relented and put their hands in their pockets. Who says protest music is a waste of time? Well done Cosmo.

Of course,  when this all kicked off, no one knew how long it would last. We asked Cosmo, was there really a plan?

“When I recorded the first song, it was just me trying to keep myself busy, not to mention sane. There was no plan to record an album. I didn’t know if i was going to become ill or if friends around me would become ill. Nobody knew how long it would all last. I just took it week by week”.

Each week a hot topic was picked. Boris catching the Virus (You’ve got it now); people reporting their neighbours for going out too often (Don’t grass on your neighbours); people blaming Bill Gates and 5G for the virus (There’s a conspiraloon about) and ‘unskilled workers’ suddenly getting the recognition they deserve (Key workers).

As always,  Cosmo uses his sharp observational wit to nail each subject, simultaneously boffing the establishment on the nose and raising a wry smile on the face of the listener.

By the time we get to  ‘I just want to see you again’ – a personal outpouring of emotion to his mates, putting into song what everyone is thinking – we suddenly have a mini album worth of material.

These nine tunes (including two secret numbers not previously aired) could have just gathered dust and been diary entries to look back on in years to come. But hey, if you have a bandcamp page, why not bang them up for download?

Cosmo contiunues: “By the time I got around to recording the last song, ‘I just want to see you all again’, it just felt like I had done enough. I didn’t want to keep writing more songs for the sake of it. I decided to draw a line underneath it and move on. So this is it”.

There has been minimal editing . This is a no frills collection, but the quality is sound, given they were all done  in one take on his phone.

Today, as I type, these tunes provoke thoughts and chuckles about what is going on around us. They help make lockdown more bearable.  How they will stand the test of time, we can only guess, but just as tunes written during struggles of the past still resonate now, we suspect that in the future these will act as postcards from history.

They go up for download on Bandcamp on 22nd May. You could just download them for free.  Or you can weigh in and prevent the man cutting off his ear, selling his body or whatever else it is penniless artists turn to. And if you do weigh in he might finally buy a round when the pubs open back up.