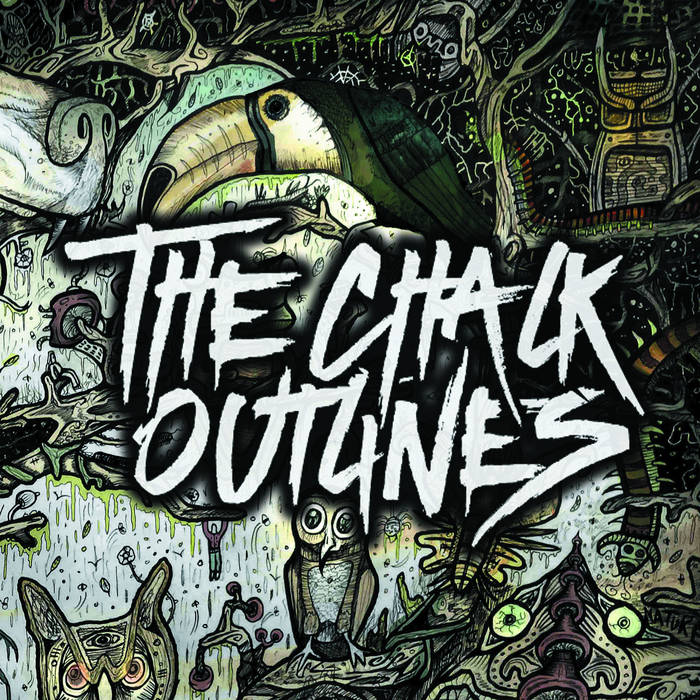 Tucked away on the western fringes of the UK, hide the best ska band you have never heard. The Chalk Outlines. This is their long awaited first EP.

This sixteen legged outfit of seasoned performers from Cardigan in West Wales casually play upbeat twenty first century ska, occasionally poking it with rusty punk nails and prodding it with a dubby taser, but always leaving the true spirit of ska alive and well.

This EP is almost faultless. They take the timeless tradition of ska, beef it up with fulsome bass, layer it with crisp clean brass, keep it rolling with beat perfect percussion and throw in guitar solos long enough to impress, but short enough to avoid being boring.

Kicking off with ‘Let the Feelings Show’, we have to assume that the feeling is a good time skanking party mood. The sharp skanking guitar chops with lush brass laid over the top makes for a good opening track.

The party mood continues with ‘The Lion is the King of the Jungle’, five minutes of groove that would get all but the coldest of cadavers swinging. When it drops down into a more dubby vibe halfway through the feet stop moving but the head makes up for it by nodding even more assertively.

Even though they are good time band we know some of these guys from old and knew that they would have to speak their mind at some point. ‘There is Something Wrong with the Right’ has a pop at the right wing whilst keeping the party atmosphere going.

We don’t know who Nancy is but we get to learn that the Outlines advise ‘Nancy, Don’t Play in the Road’ to end this EP. Again, upbeat ska seamlessly flows into dub, then punk back into ska and even a little bit of swing hiding in there somewhere.

There is one fault though. Whilst the old adage of ‘keep em wanting more’ is all well and good, we want a full length bloody album boys – come one, stop pissing about and get in the studio again!