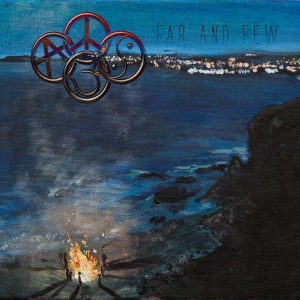 This album reviewing malarkey is not as easy as we make it look you know. Sometimes words to describe an album can be plucked from the tree of music criticism as an album is playing for the first time. Sometimes you have to patiently wait for the words to ripen before plucking them. Hence this review taking several months to formulate itself, cos this is what we call around the campfire, ‘a grower’.

It is clear the first time you listen to it that it is a special album, but you cannot quite put your finger on it. It will get your toes tapping, head nodding and on occasion your ass shaking, but it is too layered and complex to really take in straight away.

AOS3 are festival scene royalty. If Pete Loveday were to draw one of his rock family trees the shoots from this band would link in just about half the bands out there worth watching in festival land. Immediate family include Tarantism, P.A.I.N, Headjam, Nuke on Route and Less. That rich diversity of backgrounds always meant that this was never going to be a ska-punk by numbers album.

Knocking out an album of crowd pleasers would have been easy, but what would be the point of that? These are thoughtful guys and gals that think deeply about the world around them, love their musical heritage and wear their psychedelic credentials on their sleeves. It would have been a crime if they had not dug deep for this album, and dug deep they have.

It is twenty years since the last album, although in fairness to them, for ten of those years they had split and gone their separate ways. But then back in 2007 they reformed to see what would happen. And they liked what they saw. Nine years on the band have expanded to take in Penny and Oscar (John’s partner and son) and are probably playing to bigger crowds than they did first time around. Time and experience has brought with it a certain amount of satisfaction with their place in life, so they can take the time and create the music that they want to, not what some others might expect them to.

Having said that, here at Peppermint Iguana, we never expected them to create anything other than a thoughtful, layered, mature album.

Sitting here almost six months after its launch, with the room illuminated by nothing other than the monitor of the computer, all those times we have listened to the album and dug its different parts make sense, as now they are forming more than their sum and the jigsaw is falling into place.

‘Ritalin’ punctuates the air with several angry punches, reflecting the frustration and anger that our education system is letting down our children – turning out people who can pass exams, behave themselves and get a job, rather than passionate, inquisitive thinking adults.

The pacification of the masses continues after graduation from school, with people being trained to be passive customers, rather than citizens. ‘Living in a Barcode’, sums this up, as we are lumbered with the chains of debt to keep us sedated. The laid back dubbiness of the track in stark contrast to the punchy ‘Ritalin’, helping to express the weariness of life as a number.

The tempo lifts for ‘Last of the Summer of 77’, hinting at the old AOS3, with punk, ska and psychedelic dub all popping around for a glass of wine. It is an ode to all those old school punks that have remained loyal to the cause of rebellion, rather than the fashion victims who moved on when the initial party was over.

The ultimate victim of the punk fashion was John Simon Ritchie, AKA, Sid Vicious, is the subject of ‘Goodnight John’, which angrily rages at the people who try to suck us dry for their own ends.

‘Friendly Fire’ sees Sam letting his heavier side show with a hint of metallic guitar peeking through. ‘Dred it’ gets all dubby as we return to the issue of debt with John verging on rapping whilst Penny provides a sweeter backing vocals. Old Winston’s credentials as a national hero are challenged by the punky ‘Churchill’.

If we are giving the impression it is all doom and gloom, that’s not the case. AOS3 are nothing if not glass half full people, identifying the problems but looking for solutions and keeping a sense of humour to avoid being ground down.

This album is the culmination of ideas that have been bouncing around for many years, some dating back as far as the original band line up, some were dabbled with by LESS. The spirit of the late Crispian Baker, can also be felt throughout.

As with everything AOS3 put their hands on, this is not just a CD, we get a beautiful packaging complete with lyrics and extra sleeve notes. And it is also available as an old skool slab of twelve inch vinyl as well.

The only thing that spoils it, is one of those annoying tracks at the end where you think the album has finished later and ten minutes later you realise it hasn’t as the music kicks back in. But hey, it is AOS3, they don’t do things like other people.