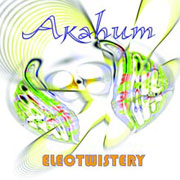 It can be very difficult to get an ‘organic’ vibe going when making music with predominantly electronic ‘instruments’. Akahum have a bloody good go though and on the whole manage to pull it off.

‘Bang-ra’ kicks things off and, to be honest, although it has its interesting moments, it is somewhat unremarkable…. but things soon change. In steps ‘Hempi’, which starts off with a bit of an old skool ‘club dog’ chill out vibe, floating and bubbly but half way through the tempo sneakily rises without you noticing at first and some psychedelic guitar is thrown in and by the time we get to the end we have to check the machine to see if it is the same track. ‘Amber Temple’ takes you back to the chill out vibe but just as you start sinking back into the bean bag it grabs you by the scruff of the neck and shakes you into a shamanic tribal techno thing.

And that is how the bloody thing continues, lulling you into a false sense of security, letting you think you know what is going on, then transporting you to another part of the globe with no respect for the genres that us safe heads like to pigeon hole things with. The classic Ogden Nash poem ‘Last Night I Saw Upon The Stair’ is given a Middle Eastern backing track just to mess your head up for ‘Persh’. By the time we get to ‘Primarky’ you start to get your head around the fact that you need to expect the unexpected, but even then there are a few surprises in store with bits of funk and dub sneaking in, messing with your mind, then sneaking out before you have time to realise they are there. ‘Underglow’ gets really dubby, bubbling away like the water in a bong but you just know that its gonna go out with a bang and ‘Organico’ does not disappoint, getting you going like the bloke that always ends up stood by the Guarana stall at 4am; out of it, but in a natural state of mind.

By the time you get to the end you have no option but to go back to the beginning to make sure you had not dreamt it all.