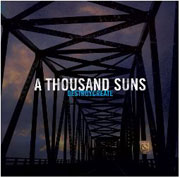 With so many decent ‘rock’ bands around in South Wales at the moment it takes something special to stand out from the crowd. You could be original, well there is nothing spectacularly original about this lot; you could be heavier than anything that has gone before, well they aint gone down that route either; or you can just outshine everybody else with your talent.

Now then…. this is where these boys stand out. Nothing too fancy, nothing pompous, nothing excessive, they have just taken a tried and tested formula of slightly metallic rock, filed off all the rough edges and polished it so you can see your face in it.

It is adventurous enough to be interesting and although we have already said it is not particularly original, it has to be said they do have thier own sound and don’t sound like anyone else. It is slightly understated but then they don’t need to scream and play at a million miles an hour to prove anything.

You get the impression though that if they really wanted to they could be an air guitarists wet dream. Nice chunky rhythms to get you grooving with slick guitar licks over the top, complimented by vocals where you can actually understand what the vocalist is signing. Not normally our sort of thing but we would be more than happy for this to sit on our shelves.