‘A Band Called Death‘ is a documentary about a band called, erm – Death! The incredible story of how a black proto punk band from Detroit that could not get a gig or a record contract in the seventies, rise to critical acclaim in the 21st century. 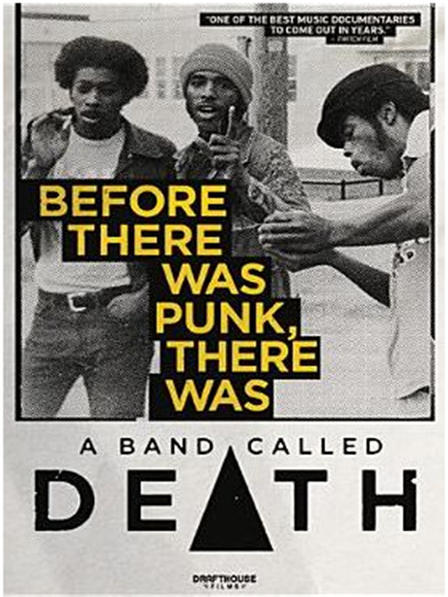 In 1973 three sons of a Baptist preacher discover a love for music. They live in Detroit – Mowtown – they are black, and so the easy route would have been to play soulful grooves. And initially they do have a funky edge to them a band form a band called Rock Fire Funk Express.

Then they discover the The Who and Alice Cooper. All bets are off, they are going to be a rock band.

Brother David takes a lead and shapes the direction of the band. He wants riffs like the Who and solos like Hendrix. And controversially, he wants the band to be called Death.

They set about rehearsing, get some tunes written and get themselves into a studio to record them. Whilst the resulting music blows people away, no one, but no one, is interested in signing a band called Death. They get rejection after rejection letter from record companies first in the USA then all over the world.

They bite the bullet and decide to release a limited run of five hundred copies of a single featuring two of their signature tunes.

They persevere for several years, but eventually the band splits up. The brothers drift apart in terms of geography, but never in terms of their love for each other. The legacy of their father keeps them spiritual and two of them start playing gospel rock then eventually reggae.

Fast forward to the twenty first century. Unknown to the band, that limited run single is now going for stupid money on the collectors market and indie record nerds are fascinated by this mystery band.

We have a series of twists and turns – we don’t want to give away the whole plot – and the band belatedly become cult legends thirty five years after they had split up.

Whilst the likes of the Ramones the Stooges and the MC5 were regarded as major influences in the development of punk, these guys, who were around at that time, were totally unheard of and went un-noticed till fate dealt them an unlikely hand decades later.

This is a heart-warming tale of sticking to your guns, having faith (in more ways than one) and how quality will always shine through, eventually. A band that were once regarded as ridiculous are now regarded as visionary. The likes of Jello Biafra and Henry Rollins feature in the film paying tribute to their genius.

What’s more, that unheard material is now available for us all to appreciate forty years later. And you know what? It has stood the test of time. This is not just hype, they really did rock.

So stick to your guns girls and boys, the kudos you will get for not compromising might take a while to come, but when it comes, it is all the more valuable.